I know that I cannot convince anyone of believing in voodoo bullshit but here is one that ought to curl your nostril hairs:

On the afternoon of October 2, 1995, as the first of many of Seattle's runs were crossing the plate in our one-game divisional playoff, twisting the knife into our playoff hopes, suffocating the franchise's dreams for the rest of the decade, right then and there on the bottom of the telecast's screen came the scrolling words (paraphrasing here): Breaking News, OJ Jury has reached verdict ... to be announced in court tomorrow morning ...

The Angels were decimated and were not even the big story for all of six seconds. So the next morning they read the verdict and Earth goes crazy and nobody really experiences the painful earth-ending asteroid that was the 1995 Angels collapse. Except maybe 114 of us and we know who we are.

So last night, just as the terror of Drew's HR sinks in, what news event gets announced on the CBS newsbar on our left sidebar of this website: 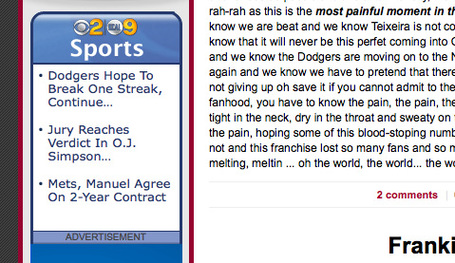 Basically, when I saw that, it made me think of all that "you are part of some great big plan that is a mystery and every once in a great while something reveals itself to remind you of the cosmic majesty of the grand design of the universe" stuff that the nuns drilled into my head in the early 1970s.

This time, OJ was found guilty and despite our big hole we are still alive. So I know you skeptical non-voodoo types are all "oh see these are two totally separate coincidences separated by 13 years and 1 day and the fact that OJ did not cut anyone's head off this time proves there is no existence of a karmic echo syndrome or any other type of voodoo bullshit..." I know the skeptics are not impressed by this, but something about not making sense just sort of vaguely makes sense. Ya know what I mean?