Funeral for a Friend

Share All sharing options for: Funeral for a Friend

I was driving thru the OC today anyway, so I decided to stop by the stadium. Not to be a masochist, not to try for an autograph, just to connect. I pulled up to purposefully park in the diamond club parking by the Helmets that I would never get for a game. There were maybe ten cars. Over by the offices there were lots of cars parked. I thought maybe a lot of season seat holders are asking for refunds on their postseason packages instead of keeping the monies reserved as down payments on 2009. You gotta think in a cash-tight economy that some of them need an infusion of the green and that, repaid and clear, some of them won’t be back.

By the 3B Gate a truck was loading up what appeared to be the disassembled parts of the vendor booths, those irritating saps hollering to win season tickets if you just give them you personal ID-theft ready information. A reminder that the Angels’ biggest sponsor was Shell Vacations Club, a TIME-SHARE outfit. So there were PVC tubes, tables and signage. A lone folding table stood at the front of the stadium on the bricks.

I went into the store. There was one other guy in there buying stuff. There were three girls working. Nothing had been discounted yet. I asked if they had been busy. They emphatically answered "No." Fact of life: If a girl in her 20s gives a guy in his 40s the time of day it is because she is bored as shit. These three girls were so bored, they were up for an extensive chat session. "We were busy earlier today with returns." I asked her if that meant they were returning merchandise to the manufacturer or a warehouse. "No, no. People are bringing back their jerseys and jackets for refunds." I was stunned, "WHAT!?!?" They explained that any merchandise can be returned if the person has the receipt and the tags are still on them. The only exceptions are if the item has obviously been worn.

"So a lot of people are jumping off the bandwagon and want their money back?" I asked, almost scared of the answer I would be given. "Oh yeah," they said in unison, matter-of-factly, like jaded retail pros who know the way the system works. This is now easily my longest conversation with a group of 20-something chicks since I was, oh 25, almost 20 years ago. They needed no prompting from this point on. One told about a guy who brought back men’s women’s and children’s jerseys, caps and shirts and said his neighbors were Dodgers fans and that his family just could not wear their Angels stuff. One mentioned that a lot of people were pissed about the early exit. They all nodded that this was the common refrain from customers.

If you like the Angels enough to be reading about them on internet blogs you have probably come across the refrain that Angels fans are just bandwagoneers. I have written passionately that this is not the case; a core fan base has always been here. Well, today, the opposite rang true, to the sound of cash registers clinking in reverse.

I had seen the death last night, written about it into the wee hours and read about it all over again this morning. And now I had attended the funeral, just a preacher, me and the sun.

I left the store without buying anything. A truck was picking up that last folding table out front. The other one down the line was gone. My journalistic instinct to take a picture of all these events was outweighed by my fan’s still-broken heart. I stopped on the way back to the car and had to mark the moment. I lifted the camera and snapped the Big A. When I started the car, Elton John’s "I’m Still Standing" was on the radio. I examined the picture I had taken on my camera’s digital screen and for the first time in 18 hours, I smiled. The first thing we have for the 2009 season is a theme song. YEah yeah yeah. 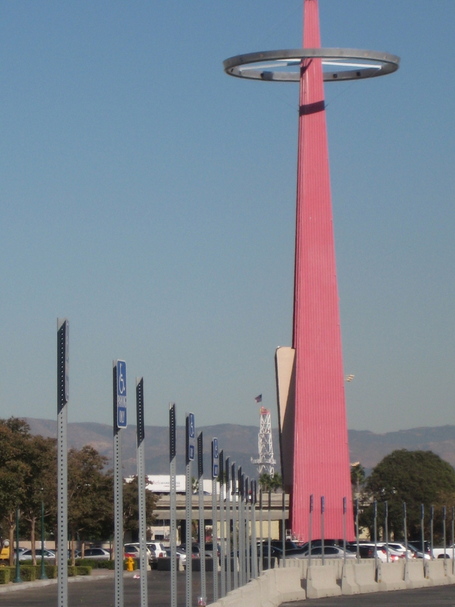