Angel lover has no time for Sox - The Boston Globe
Mat Gleason has an alter ego as "Rev. Halofan,’’ founder of the successful Halos Heaven blog devoted to the Los Angeles Angels.

Rev getting some "love" from the Boston press.

Angels show there's no hex factor in 5-0 win over Boston -- latimes.com
Don't bring any talk of a "hex" by Torii Hunter's locker. "I told you, I'm a different breed," Hunter barked when asked if the Red Sox were in the Angels' heads. "You might not want to ask me that question."

Angels hammer Red Sox in Game 1 - OCRegister.com
After another galling loss to the Red Sox in Fenway Park last month, Hunter challenged his team to "Show some (nuts)" when playing the Red Sox (and Yankees) – a cleaned-up version of the quote that he playfully disputed after the Game One victory. "You’ve gotta give Torii a lot of credit for what he said," Lackey said of Hunter’s Fenway challenge. "He put himself out there. When you say something like that, you are bringing the spotlight on you. He backed it up. "It’s definitely something I felt needed to be said and he backed it up tonight."

Red Sox-Angels Preview - FOX Sports on MSN
Beckett went 0-1 with a 4.50 ERA in two starts against the Angels this season. He's made two playoff appearances against them, pitching a four-hitter in 2007, and allowed four runs in five innings of last year's 5-4, 12-inning loss in Game 3. Jered Weaver, who pitched two scoreless innings for the victory in Game 3 last year, gets the start for the Angels. He went 1-0 with a 0.66 ERA in 13 2-3 innings against the Red Sox this season, striking out 12 while walking three.

Weaver must set aside second-half falloff - angelsbaseball.com
Weaver was 10-3 with a 3.22 ERA in the first half and 6-5 with a 4.47 ERA after the All-Star break. He had the 12th best ERA in the American League before the break and the 62nd best after. 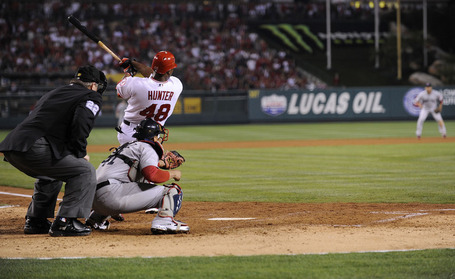 Hunter's homer puts Halos up by three - MLB.com
Torii Hunter belts one over the wall in left-center field, a three-run shot that gives the Angels the lead in the fifth

Morales plates Vlad with a single - MLB.com
Kendry Morales singles to left to score Vladimir Guerrero, then Juan Rivera scores on an error

Kendrick is called safe by the ump - MLB.com
The umpire calls Howard Kendrick safe at first on two separate plays that are disputed by the Red Sox 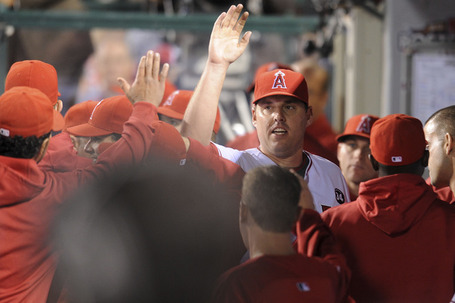 When he grudgingly gave the ball to Scioscia and headed to the dugout, the red-clad crowd rose and communicated to him how it felt. "That ovation meant a lot," he said. "They sometimes get criticized for not being loud enough, but they brought it tonight."

Torii Hunter swats Red Sox curse - Lee Jenkins - SI.com
With one violent hack, Hunter put to rest any notion that the Angels are doomed just because they drew the Red Sox, or that their past playoff failures have any bearing on this year's series. As Hunter's three-run homer kicked off the rock formation behind centerfield at Angel Stadium, you could read his lips: "That's what I'm talking about, baby!" Hunter circled the bases so fast that he almost lapped Bobby Abreu. When he reached the dugout, he took off his helmet and spiked it off the floor with both hands, nearly knocking over third baseman Chone Figgins.

Angels, Lackey get monkey off their back in win - FOX Sports on MSN
He pitched into the eighth and limited the Red Sox to four hits — all of them singles. Through the first five innings, Lackey pitched to two batters over the minimum; by the end of the seventh, he pitched to four over the minimum.

Hunter takes his own words to heart - Yahoo! Sports
That’s when Hunter, who’d demanded something like guts from everybody else, offered up his. He cold-jacked a Lester two-seamer 400-and-some feet to left-center field so that it clattered off the rock pile, gave the Angels a 3-0 lead and practically set fire to the place. He chased Abreu around the bases, nearly catching him in spite of the fact Abreu had a 90-foot head start and had been running on the pitch. He smashed people’s hands and slammed his helmet to the dugout floor, it bounding straight up and over Figgins’ head.

Hunter's nutty challenge might have broken Angels out of shell - CBSSports.com
Within this article, there's this tidbit of information:
The loss sickened Boston manager Terry Francona. Well, technically, he was ill before the game, felled by what he thinks was a case of food poisoning caused by something he ate from Del Taco. He was sick enough to miss pregame introductions, and Game 1 couldn't have made him feel better.

Angels' Napoli will start at catcher over Mathis -- latimes.com
Weaver has a 3.38 earned-run average in the 141 1/3 innings he has thrown to Mathis this season; he has a 4.59 ERA in 68 2/3 innings with Napoli. But Napoli caught six of Weaver's last nine starts, and the right-hander had a 2.11 ERA in 38 1/3 innings of those games, including a seven-hit shutout in Cleveland on Aug. 19.

ALDS Coverage: TBS, C.B., and the Boston Offense Fail in Game One - FanGraphs Baseball
C.B. Bucknor with a solid effort. Certainly showed why he qualified for the post-season. Pray for this man’s well-being upon entering the state of Massachusetts if this game is any indication.

Oh yeah, there was another game played in SoCal yesterday: 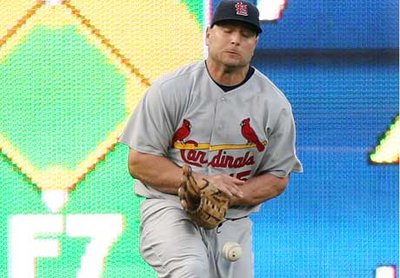 Dodgers 3, Cardinals 2: Look, I know all you Cardinals fans want to kill Matt Holliday right now, but (a) your guys may not have made the postseason without him; (b) he did hit a homer in the game; and (c) Ryan Franklin still had to walk Casey Blake, give up a single to Ronnie Belliard, walk Russell Martin, give up a single to Mark Loretta and deal with a passed ball in order for the game to go bye-bye. In other news, you had two Cy Young Award candidates pitch the first two games of a playoff series and you're still down 2-0? Welcome to the the world of the late-1990s Braves, Cardinals fans! Scully makes the call for the Dodgers - MLB.com: Multimedia Vin Scully makes the radio call for the Dodgers' come-from-behind win.

After the Angels' Adenhart Tragedy, Jon Wilhite Survives - TIME
At the very least, the 24-year-old Wilhite should be on a ventilator and in a wheelchair. Instead, only six months after the accident — which took the lives of Adenhart, Henry Pearson and Courtney Stewart — Wilhite walks, talks, lifts weights, jogs — and smiles.

A Ruthian Mystery - NYTimes.com
It features the only in-game footage in the archive of Ruth playing the outfield, where he spent more than 2,200 games. It also features a rare glimpse of Ruth striking out, then arguing with the umpire, while a young Lou Gehrig looks on.

Happy 59th birthday to one of the greatest Angels ever!