Share All sharing options for: Class of 2005: The Angels Best Breakout Candidates

Folks with long baseball memories recall 2005 as the year the Angels drafted but failed to sign Buster Posey and Brian Matusz (best Eddie Bane quote ever: "[Matusz] wanted a million bucks. Guess we should have given it to him..."). The Halos obviously missed the boat with those two, but harvested a solid collection of players currently headlined by Peter Bourjos, Sean O'Sullivan and Trevor Bell. At the time, the Angels were also congratulating themselves on snagging five other teenage talents from the draft and international FA market whose names should be familiar here: Ryan Mount, P.J. Phillips, Angel Castillo, Jeremy Moore, and Luis Jimenez. Each was the quintessential high ceiling prospect, an athletic, up-the-middle player with tons of projection, but who would need plenty of development time. Four and a half years later, not one of those guys rank among the Halos' top 30 prospects, but they continue to flash some of the best tools in the organization.

Professional baseball is littered with the "skeleton frames of burnt out" athletes who never developed MLB-caliber skills, so picking just one of the 2005 cohort to breakout in 2010 is a roll of the dice. For me, the interesting thing here is not so much the individual players themselves, but the quantity of potential four and five tool athletes who will make a run at turning their considerable natural talent into baseball skills. The laws of averages suggests that one of Mount, Phillips, Castillo, Moore, or Jimenez will break through in High A or AA, and potentially crack most Top 5 Angels Prospect lists next year. So here they are, in descending order, your top minor league breakout candidates of 2010.

The difference between Mount's promising '08 campaign and his disappointing '09? A dozen homeruns. That's it...

Overall, his K-rate, walk rate, batted ball distribution and BABIP changed very little. He just hit 12 or so fly balls that died in the Travs' endless outfield instead of clearing the fence. No doubt Arkansas is a crummy park for hitters, but the 80 OPS+ underscores the limits of a player whose value is tied to good-but-not-elite pop. Batting .208/.250/.264 over 53 Arizona Fall League AB's did nothing to boost his stock (though he looks good in this video). While it's possible that Mount jumps to AAA next year, I think the favorable hitting environment would be counterproductive to his development: it would be a hard thing to commit yourself to a new approach when you're suddenly hitting .280 with power in Salt Lake City's thin air. Taking another shot at AA while fellow second baseman Nate Sutton advances to AAA makes far more sense. Moreover, recently signed minor league free agent Alex Valdez is coming off of a strong '09 season in AA, is currently smoking it in the Dominican, hitting .296/.353/.454, and will probably also move ahead of Mount on the organization's thinning middle infield depth chart.

On the surface, Phillips' season looks far worse than even the disappointing .275/.311/.416 line he put up at the same level in ‘08. However, there are qualifications to consider: back in April, the Halos bumped him from shortstop to second base, where he gritted it out defensively but hit only .202/.237/.327; in the early summer, he shifted to the outfield, looked more comfortable, and hit .261/.304/.411 from that point on - certainly no breakout, but a step in the right direction. Moreover, he kicked ass in centerfield, drawing good reviews from both scouts and TotalZone. I saw him in August and he looked like the best athlete in a Quakes' uniform, ripping a double and a triple, running the bases well, and making two outstanding plays in the field. Most promisingly, he posted a solid .281/.333/.422 line against good pitching in the AFL after taking Pete Bourjos' roster spot on the Mesa Sox. The video here shows him working the count and driving the ball, providing hope for a 2010 breakout. Advanced pitching and the Travs' spacious ballpark will eat him alive if he doesn't change his approach, but again, take heart from Phillips working the count in the video above. I posted a picture of him below - that lanky frame remains extraordinary projectable. 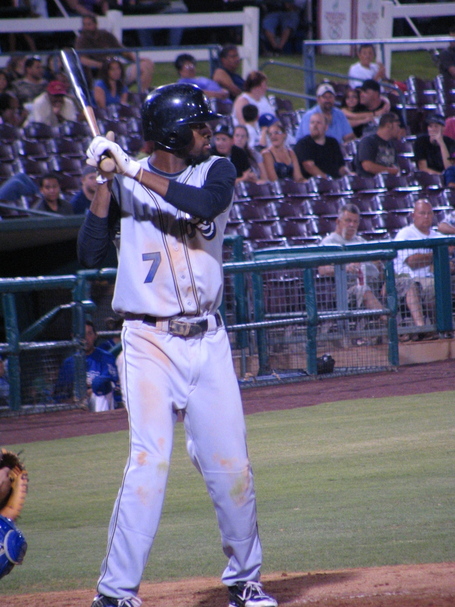 Castillo is one of two guys in the Angels' system who could come out of nowhere in '10 and whack 30 homeruns. He also plays an outstanding right fielder, shows speed on the base paths, and will take one for the team at every opportunity (he tied teammate Roberto Lopez for most HBP's in the system last year with 17). However, while he did cut his k-rate by about 4% from ‘08, he still whiffed in nearly 25% of his '09 PA's. The most frustrating yet tantalizing thing about Castillo? He hit .298/.378/.558 against lefties last year (the flip side is he hit an anemic .224/.288/.348 against righties). Scouting reports have harped on Castillo's inability to hit breaking balls, so the extreme split makes sense. I saw him absolutely crush an offspeed pitch from a righty last June (a game winning homerun), and when I asked him about it he acknowledged that he was sitting on the change-up. If he ever learns to hit something with break (F-U Jobu!), watch out, because he has the tools of an allstar. The Halos signed him as a seventeen year old, so his clock is ticking a little too fast for him to still be in A-ball: he'll be eligible for the Rule 5 draft next year, and will have to make the 40-man by 2011 to stick with the Halos.

The sabermetric wisdom pegs the toolsey Moore to regress - not breakout - after an '09 campaign that featured a 28% k-rate and well-above-average .388 batting average on balls in play. That's fuel for the haters, sure, but let's consider the positives: Moore actually reduced his k-rate by 4% over his 2008 numbers, he improved his walk rate by 2%, he had no problem squaring balls up, and his batted ball distribution - 19% line drives and 47% groundballs - supports an above-average BABIP for a speedy left-handed hitter. His best games of the season came in a brief July promotion to AA, so the Trav's cavernous park didn't trip him up much. Lastly, his defense was outstanding across the board, a virtue that outfielders Terry Evans and Chris Pettit didn't share in ‘09. Is he a late bloomer? The exceptional homerun power that he showed in Cedar Rapids was absent in the first half of ‘09, but could reemerge. His 56% stolen base success rate this season was terrible, but hopefully failure taught him a thing or two about when to swipe a bag. He showed a slight reverse split, handling lefties better than righties, so there's no sign of a platoon weakness (yet). All that could add up to him becoming a left-handed Terry Evans - which, fair or not, is more valuable than the right-handed Terry Evans - or even better. Or he could flop, but I have a good feeling about him. See the picture below. 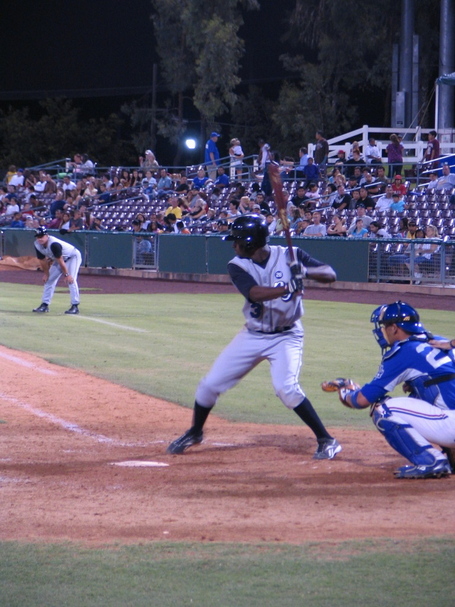 Here's the other guy who could come out of nowhere and knock 30 HR's in 2010. Luis "Lucho" Jimenez made all of the top prospect lists last year on the strength of two consecutive homerun titles, a crazy good (even for the Pioneer League) .293 ISO, solid contact rate, and scouting reports that said he could be at least an average third baseman. Sadly, he tore the labrum in his throwing shoulder in an ‘08 game where he made two diving plays - one trying to make a stop at the hot corner, and one diving back to first to avoid a pick-off - and succumbed to a surgery that sidelined him through 2009. He's currently on the AZL Halos' roster, presumably rehabbing, but where he slots in come 2010 is a mystery - if he's healthy enough to slot in at all. Do the Halos send him to Cedar Rapids, taking at-bats away from Dillon Baird, Casey Haerther and Mike Wing while ignoring Jimenez' ticking minor league free agency clock? Or do the Halos skip him to Rancho to reunite with his cohort, and hope for California League fireworks? At this point there are more questions than data to chew over, so all we can do is wait and watch for this guy in the boxscore.