Tom Tessier has set himself a lofty goal.  Tom, who writes the blog "The Angels, In Order" has set out to collect an autograph of every Angel player.  Not just current Angels, but any player who has ever donned an Angel's jersey.  Starting with Ed Yost of the expansion Los Angeles Angels, "The Angels, In Order" chronicles the debut of each player as they appeared with the team.  With each debut, Tom posts a brief biography of the player including an image of a custom made autograph card.  An autograph card is created for each player that includes the players name, an image of the player, the year he debuted, and a cutout displaying the player's signature.  "Lately I'm concentrating mostly on Angels and former Angels of which I have roughly 700 of 820. And that doesn't include all the former managers and coaches and front office folks I have and still need to get. I make them (the custom autograph card) myself using PhotoStudio 2000. The card I make is mostly an overlay with a cutout for an autograph on an index card. I wanted to have an All-Time Angels set, and there aren't any available so I thought I'd make my own."

"The Angels, In Order" blog has been around for a couple months, but Tom has been blogging for a little over two years.  Tom said he started with a blog on a box of his son's old cards and then he mov

ed on to a site highlighting some out-of-the-way baseball fields, and another on airplanes he's seen ("Look! An Airplane!").  "Except for the "Small Ballfields" blog, the others were short lived. "The Angels, In Order" though has captured my heart.  I wanted to start "The Angels, In Order" blog to share my love of the team, and to have a place to display my collection of Angel autographs and memorabilia."  Some of the other Angels memorabilia includes items such as a ticket stub given to him by his father from Nolan Ryan's 3rd no-hitter against the Twins on September 28th 1974, but the highlight of the blog is Tom's autograph collection and the stories behind some of the signatures.  "I probably have about 2500 autographs overall, mostly on baseball cards and index cards. I don't really collect autograph baseballs as they take up too much space."  One of Tom's fondest memories was the time he received his first autograph, "I remember asking Paul Hartzell for an autograph and his response of "Are you sure it's me you want?" as he signed my baseball."

Growing up in Fountain Valley, Tom says he's been an Angels fan for as long as he can remember as his family has gone to games since 1966.  "My folks moved from Rhode Island in the 50's so they came over as Red Sox fans (I'll never forgive them), but when the Angels came to town they switched their allegiance. I have my doubts though when the Sox come to the Big A to play."  Married for 23 years and currently residing in Mansfield, Texas since 2000, Tom works as an Aircraft Systems Engineer for L-3 Communications, Link Simulation and Training making military aircraft simulators.  He also stays busy raising a family which includes five children (a 21-year old son and four 10-year old daughters...yes, quadruplets), but he says he still finds time to maintain his blog, "Time is hard to come by unless it's after everyone's asleep, but I only spend about 2 or 3 hours a week on it."

Living near The Ballpark in Arlington, Tom says he goes to every game while the Angels are in town and his favorite current player is Torii Hunter because of what Hunter brings to the team both personally 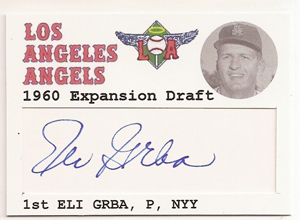 and professionally.  Nolan Ryan and Tim Salmon are on his list of all-time favorite players, but during the 1970's as a Junior Angel, Tom said, "I also wanted to be Joe Rudi."  It was during this time he started collecting signatures, "I started collecting autographs in the early 70's as a kid at Anaheim Stadium. We were able to get down on the field level back then even though our seats were up top. I had several baseballs covered in autographs from the 70's.  Nowadays I get a lot of retired players' autographs through-the-mail. I belong to an autograph collecting group called Sportscollectors.net where you can share successful home addresses. I typically send out a handful to spring training and I also get a lot of guys during the season at the stadium during BP and at special events."  When asked about the responses he's received, Tom said, "Among other collectors I've gotten a very positive response both towards my goal and the design of my cards. I got the custom card and blog idea from a Mets collector friend of mine who started a similar collection and blog at The Amazing Shea Stadium Autograph Project.  I typically don't tell the player I'm sending to that it's for a personal custom set of All-Time Angels.  And so far, of the players I have sent them to, none have ever not signed the card. I know that a lot of current players are hesitant or even refuse to sign on a blank area due to identity theft, so if I know that ahead of time then I'll explain what the card is for. I had both Kevin Jepsen and Mike Butcher tell me in person that they couldn't sign my custom card. They graciously signed a normal baseball card though."  When sending requests through the mail, Tom includes a short questionnaire, "The older guys that played in the 50's and 60's almost always send a note or answer the questionnaire I include with my autograph request. I just ask them how they broke in their glove, if they remembered their first hit or win, and what they're doing now, or I'll just ask about their fondest memory. I've gotten some great responses like that from (non-Angel) Bob Dillinger who wrote ‘Whatever happened to the old days for just a simple [autograph]? I am 86 years old I don't know too much.'  Classic."

Tom has some tips for those interested in collecting autographs:

As far as collecting autographs in person my biggest suggestion would be to always be polite, ask please, call them Mister, and say thank you even if they decline to sign for you.  Remember, no player OWES you an autograph.  It's always nice to be prepared ahead of time.  I know ballplayers appreciate it when you know who they are by calling out their name.  As a personal rule I usually have no more than two baseball cards ready for them to sign, and almost always they'll graciously sign both.  If you want to be successful through the mail, again do your homework.  Join an autograph group that shares successful home or stadium addresses.  That way you're sending to guys that don't sign, wasting stamps. I include a nice personal note and short questionnaire.  I feel that this shows them that I am genuinely interested in them (which I am), and not just looking for an autograph.  Always include a stamped-self-addressed envelope, and again I usually send 1 or 2 cards and a blank index card.

If you have any questions about autograph collecting, airplanes, or life in a household with 5 females, you can contact Tom though his blog (The Angels, In Order).