Is Bootleg Merch a Status Symbol?

Share All sharing options for: Is Bootleg Merch a Status Symbol?

IN these trying economic times, the $189 replica jersey may be a thing of the past. The $39 hat might also be a bit passé... and with so many questionably casual fans out there, one almost longs for the ugly Angels Disney Winged Logo, if only to show that one is a hardcore fan, that one is willing to look a bit "off" or "fan-ugly" to advertise one's deeper loyalty to the franchise over the status of appearing pleasant to the real housewives of the OC.

With our best seats beset by snotty Newport attitudes antithetical to hardcore franchise fans, why should fashion decorum demanding the donning the latest duds be adhered to? I ask you all to examine the cap pictured below. It is a ghastly mistake of a terrible copyright gray area knockoff of the Angels logo. Nobody in Coto-De-Cauza would be caught dead wearing it. It set me back $6 bucks - it is a fitted wool cap and Santee Alley in the Downtown L.A. garment district is brimming with many of these borderline-logo bootlegs. 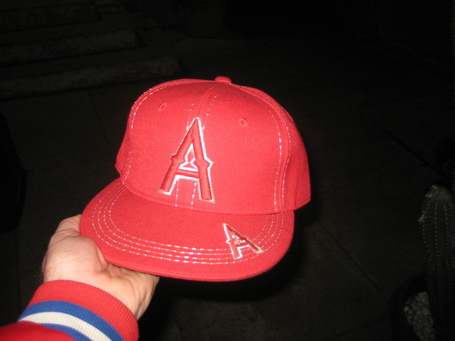 In a fan culture beset by smarmy upscale suburban values, I would argue that it is up to us to represent our loyalty to the team by wearing coded merchandise that is unlicensed, exists outside of the norms championed by conformist culture, offends the sensibilities of those who would happily disallow seating at the stadium for under $90 per seat and simultaneously makes sure no fan of another team thinks we are any less the hardcore base of this franchise's fans. Think about it.