Share All sharing options for: Orlando Cabrera to Oakland 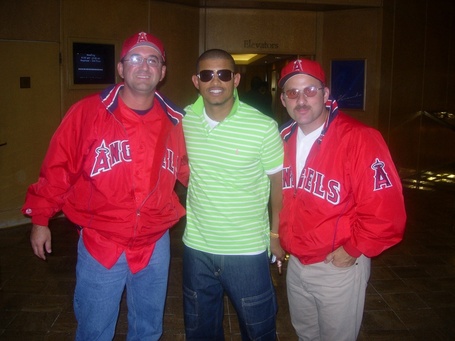 The Oakland Athletics have signed former Angel Orlando Cabrera to a one-year, four million dollar deal. OC will be the starting shortstop for the A's, replacing automatic out Bobby Crosby and offering a major defensive upgrade for a young pitching staff that is focusing its Spring activities in Arizona on finishing junior high and potty training before the season starts.

ANALYSIS: OC is a smart, smart guy, but he misjudged the economic impact on baseball salaries this offseason, declining arbitration on what would have been an assured $8 million deal with the Pale Hose. Now he faces life in never-neverland as the post-Fremont tarp-covered hangover is sure to disappoint the 1,200 hardcore fans of Michael Smith's Philly/KC nomadic Republican Elephants.

An animated corpse would be an upgrade over Crosby at SS so this is a massive improvement and only costs Mister Constant Rebuilding a 2nd round draft pick. OC can up his market value as long as the Great Depression #2 doesn't last into the next offseason.

SLIVER LINING: OC will be playing 38 games against Texas and Seattle combined this season and perhaps that is a good thing for the Angels if this division is tighter than we imagine. With or without Cabrera, Joakland is at best a 5 games below .500 team in 2009, but go ahead and overachieve, maybe even sell 10,000 extra tickets to a bobblehead game you scrappy Brett-Favre-Colored walk-takers...