Okay, I admit it.  I was wrong about the Angels' starting pitching.  I was one of the fans who thought there was no way Shane Loux, Matt Palmer, et. al., would be able to provide adequate pitching this season and something needed to be done with the Halo's roster.  Although, I didn't think signing Pedro Martinez or Paul Byrd was a good option, I did advocate that the Angels' front office should explore trading for a starter using the team's depth at shortstop.  While I'm pleasantly surprised by the last two starts tossed by Loux, and the great game Palmer pitched against the Yankees, the return of John Lackey and Ervin Santana can't come soon enough.

Shane Loux, who so far reminds me of last season's #5 starter Jon Garland, had spent 6 seasons in triple-A where he compiled a career ERA of 4.73 and allowing almost one-and-a-half base runners per inning without the skill-set to strikeout hitters (402 K's in 1263 IP).  This season, Loux is relying on his two-seam and four-seam fastballs to induce groundballs and reduce extra-base hits.  Last night against Oakland, Loux's four-seam fastball had an average of -8.74" horizontal break, while his two-seamer dropped an average of -10.22" resulting in 10 groundouts by the A's hitters.  The key to Loux's success last night was his ability to throw first-pitch strikes to 16 of the 25 Oakland batters he faced (pitch fx data provided by www.brooksbaseball.net). 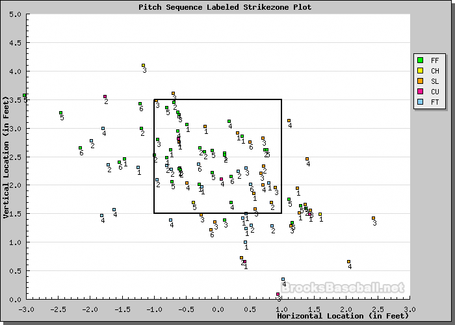 Can he keep it up?  I doubt it, as he doesn't have the history to backup these two outing.  However, he really doesn't need to, at least not as a starter.  Once Lackey and Santana return to the Angels' rotation, Loux will probably move to the bullpen as a long reliever or situational righty who can get a groundball out when needed.  Last season Loux appeared briefly in the Angels' pen, facing 61 hitters in 16 innings.  Of the 61 batters Loux faced, over half hit the ball on the ground, a highly desirable trait for a relief pitcher entering the game with runners on base.  This season, Loux is nearly maintaining the groundball ratio he showed last season.  In 2009, Loux has induced 51 groundballs in 103 plate appearances.

As of today (5/6/09), the Angels are one game under .500.  With the return of Lackey and Santana as soon as next week, and the eventual return of Kelvim Escobar early next month, the Angels will be in a position to take control of the A.L. West.