Was Scott Kazmir Getting Squeezed By The Umpire?

Share All sharing options for: Was Scott Kazmir Getting Squeezed By The Umpire?

There were a couple comments in the game thread during yesterday's Angel/Yankee game about the two different strike zones; A.J. Burnett getting a wider zone than Scott Kazmir.  Was Kazmir getting squeezed while Burnett was benefiting from a huge strike zone?

With this website (BrooksBaseball.net), it's real easy to check out the data from any game.  Below are two plots from yesterday's game (9/23/09) showing the location and outcome of both starter's pitches.

A.J. Burnett's pitch data (click on the plot to enlarge): 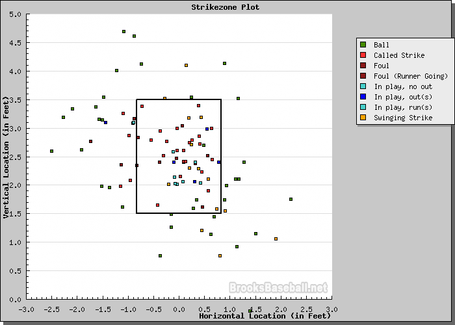 The only questionable strike calls were on four pitches off the plate (either inside to RH batter or outside to a LH batter).  It also looks like the umpire missed a couple low pitches that were called balls which were actually strikes.  Otherwise, looks like the home plate umpire did a good job with Burnett, but how does it compare to Kazmir's zone... 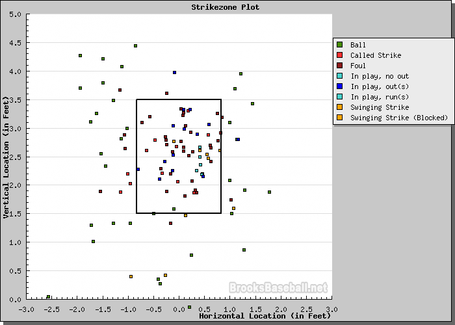 When you compare the two pitcher's strike zone, home plate umpire Mike Everitt was very consistent with each pitcher.  Kazmir got the same inside strike (to RH batters) that Burnett was getting, and there was only one Kazmir pitch which was within the zone that was called a ball.  Overall, Everitt did a great job for both pitchers.

I think this kind of data is pretty fascinating, and while looking at it I noticed something interesting with the location of the pitches for each of Kazmir's hits allowed.  Go back to Kazmir's pitch plot and look for the light-blue squares.  Those are the pitches which resulted in hits (all from right-handed batters).  Each of the hits were approximately a half foot from the center of the plate and between 2.2 and 2.7' above the plate.  Roughly the size of a Burger King Whopper.  Kazmir might want to stay away from that spot, at least when he pitches against the Yankees next month as it looks like they tend to feast on that location.  Also, look at the number of dark red squares (foulballs) Kazmir has on his plot compared to Burnett.  There were too many of Kazmir's pitches that were fouled off for me to count compared to Burnett's approximately eight foulballs.  The difference between Kazmir's four strikeouts and Burnett's eleven.