What If There Were A West Coast Bias?

Share All sharing options for: What If There Were A West Coast Bias?

HTML clipboard Many baseball fans of teams located west of the Mississippi River complain about the media's "east coast bias", specifically regarding ESPN's coverage of the New York Yankees and Boston Red Sox.  On a typical day, the ESPN headlines regale a Yankee win or cover the latest Red Sox player who's struggling with injury, often times more prominently placed than something most fans would think is more newsworthy happening to a west coast team.  I can understand the Yankee coverage.  The Yankees have always been the biggest story in baseball since the days of Babe Ruth and Lou Gehrig, buts its only been recently that the Red Sox have been the second biggest star in the baseball universe.  Is this the effect of ESPN's cause?  What if, when the founders of ESPN decided to start their sports network, they had decided to place their headquarters in the Pacific time zone?  Would fans be complaining of a west coast bias and the continual coverage of the Angels and the "evil empire' of the Dodgers?  And if there were a west coast bias, what effect would it have on the Angels? HTML clipboard In 1986, the year Dave Henderson broke the hearts of all Angel fans, the Red Sox team payroll was almost exactly the same as the Angels (Boston - $14,402,239, California - $14,427,258).  Last season, the Red Sox outspent the Angels by roughly the entire total payroll of their 1986 team, and were approximately 49% above the average team payroll in both leagues.  However, the Angels' payroll did not suffer, as they spent nearly 35% more than the average baseball team and have done so over the last 5 seasons. 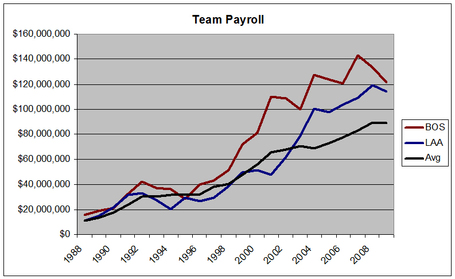 HTML clipboard Both teams have enjoyed success with new ownership.  Boston's ownership changed hands when a group headed by John Henry purchased the Red Sox from the Yawkey Trust in 2002 and the Angels were bought from the Disney Corporation by Arte Moreno in 2003.  Since the new owners have taken over, each team has outspent the average major league team by more than 30%.  Since 2003, the Angels average payroll has exceeded the average by 31%, while the Red Sox's were more than 61% above average.  The actual revenue amounts for each team is a highly guarded secret, but if one was to assume payroll is percentage of total revenue, both teams are doing well. 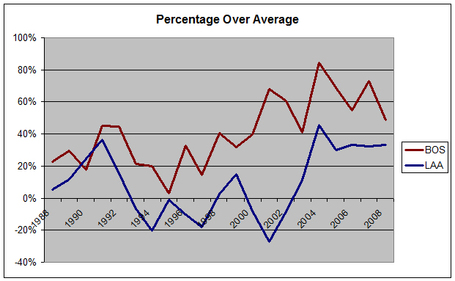 HTML clipboard Since 2002, each team has enjoyed successes never before seen in their franchise histories.  Success usually breeds higher revenue as more fans attend games and overall interest in the team increases.  Both teams have been in the top 4 in attendance since 2002, as the Angels have exceeded 3 millions fans in each of the last 6 years, while Boston has drawn just over 17 million since 2003.

Obviously revenue is not based solely on attendance, or the Angels payroll (if based on revenue) would be higher than Boston's.  Boston is hampered by having one of the smallest park capacities in baseball at just over 39,000, but that hasn't hindered their ability to generate revenue.  With the New England Sports Network (NESN), Boston's regional sports network is one of the highest revenue generating networks in sports, the Red Sox have a revenue source few other teams can match.  But how does this relate to east coast/west coast bias?

No one can deny the east coast teams receive more media coverage than their west coast counterparts, but I doubt it's because of some sinister plan by ESPN or the other sports media outlets.  It's because of time.  When west coast games end, most fans in the central or eastern time zones are sleeping, having already been updated on scores and news.  Have the Boston Red Sox benefited from this?  Absolutely.  Has the east coast bias hindered the Angels?  I don't think so.  With more coverage the Angels would probably generate a bit more revenue and have a slightly higher payroll, but the important thing for a team's success is its ownership and team management.  Since Arte Moreno has taken over ownership of the Angels, they have succeeded in spite of any biases there might be in the media.