Guerrero sticks it to the Angels, Kazmir "turns the page". Halolinks

Share All sharing options for: Guerrero sticks it to the Angels, Kazmir "turns the page".  Halolinks

Kazmir, Angels unable to slow Rangers' roll - angelsbaseball.com
Scott Kazmir, hoping to leave a positive impression on Scioscia in his final effort of a disappointing 2010 season, managed to duel Lee on fairly even terms.Lee departed after seven innings with a one-run lead, but Bourjos tied it with a solo shot to left with two outs in the eighth against O'Day. It was his fifth homer. Kazmir kept his team in the game as he continued to search for his former All-Star form, limiting Texas to two earned runs in 5 1/3 innings, issuing only two free passes along the way. With losses in 11 of his final 13 decisions, Kazmir finishes the season 9-15 with a 5.94 ERA. He plans to spend the winter in Arizona working on his physical conditioning and his command in an effort to carve out a rotation spot next spring. "Kazmir battled," Scioscia said. "It's definitely a season he needs to turn the page on, and he will. I think it will be the most important offseason of his career, the most important challenge of his career. I think he'll get to work and get closer to the potential he can pitch at.

I was going to link to a Dallas newspaper for the game link, but I'm tired of reading about how the Rangers are going to setup their rotation, or how much Josh Hamilton is going to play before the playoffs start. So instead, let's read about how crappy Scott Kazmir has been this season. Yay! I mentioned in yesterday's links that if the Angels had won half of Kazmir's losses, this weekend's series with Texas would mean something. And again, I'm not blaming Kazmir for the Angels missing the playoffs, I'm just saying the season would have been much more different had he pitched the way he had in previous seasons. Here's the 'lights: Bourjos blasts a homer to left - Peter Bourjos hits his fifth homer of the season, a solo shot to left in the eighth inning. If you watch this video, notice how Bourjos pulls his hands in and kind of yanks the ball to left. Vlad's single puts Texas up, 3-2 - Vladimir Guerrero singles to left to score Nelson Cruz with the go-ahead run in the eighth inning. It looks like Vlad has it in for the Angels. And finally, the video that sums up the Angels 2010 season: Aybar swings, gets hit - Erick Aybar takes a swing and is hit by the pitch. It'd be one thing if the pitch hit him in the foot or the arm, but no, it hit him in the nuts. Kind of what this season was like for the fans.

Angels-Rangers Preview - FOX Sports on MSN
The Rangers have won two games at home in which they were opposed by Weaver (13-12, 3.02 ERA), who will try to take over the strikeout lead from Seattle's Felix Hernandez. Weaver has 229 strikeouts, leaving him three behind the Mariners' ace, who has been shut down for the year. Weaver is 3-1 with a 3.73 ERA in five starts against Texas this season, but 0-1 with an 8.44 ERA in two starts at Rangers Ballpark. The Rangers will hand the ball to Tommy Hunter (13-4, 3.80), who originally was expected to work out of the bullpen during the playoffs, but now will pitch Game 4 against Tampa Bay or the New York Yankees, if necessary.The right-hander has split two starts against the Angels in July. He allowed eight runs and eight hits in three innings of a 9-7 loss July 30.

Weaver's last start of 2010, and his attempt at becoming the A.L. strikeout leader.

Reagins denies 'personality conflict' with Bane - The Orange County Register
"We have good players. It's more about the process," Reagins said, denying that Bane's firing was a direct referendum on his draft strategy. "In order to be successful, you have to have talented players in your system and we feel we do. But some of the players that we have that are very talented have not materialized with that talent within the system."

Bane kept talent flow coming for Angels - The Orange County Register
Or maybe they mean differences in the ways to assemble baseball talent. Since Bane’s philosophy was to draft and sign really talented guys, it is left to the reader to determine the Angels’ philosophy.

This is a Whicker article. You've been warned. 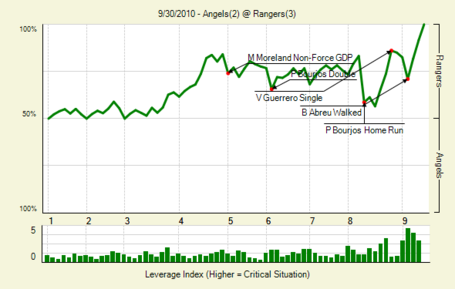 K-Rod's contract grievance to start Oct. 18 - CBSSports.com Baseball
Lawyers from Major League Baseball and the players' association met Thursday, and they scheduled Oct. 18-19 in New York for the start of the hearing before arbitrator Shyam Das, two people familiar with the talks told the Associated Press. New York's decision, and an earlier move to put Rodriguez on the restricted list for two days, cost him $3,142,076 of his $11.5 million salary this year. In addition, the team said it was exercising a contractual right to convert the rest of his $37 million, three-year deal to non-guaranteed, meaning the Mets could try to avoid paying most of what's left on it. That move also is subject to the grievance.

There are rumors the Angels are looking for a veteran presence in their bullpen. K-Rod maybe become a free agent. Imagine a bullpen with both Rodriguez AND Rodney in it. 100cc of maalox STAT!

Padres on cusp of elimination from playoff race after 1-0 loss to Cubs - USATODAY.com
Held to just three singles, the Padres lost 1-0 to the Chicago Cubs and were pushed to the brink of elimination from the playoff race. The loss reduced San Francisco's magic number for clinching the NL West to one and idle Atlanta's magic number for clinching the NL wild card to two.

Alright, what kind of person would call in to complain about this? Disgruntled Cardinal fans? People with nothing better to do? Seriously, there are five people out there that I hope I never have the opportunity to meet because I'm sure they're really, really sad individuals.

The Twins Joined The "Humiliating Rookie Costume" Parade - Deadspin
Witness Jeff Manship and Drew Butera. Rookies. Two peas in a pod. A duo even. Ambiguously gay? Who knows. Is it funny for one of SNL's best sketches—miss you, Smigel—to have been turned into a costume so that baseball players could make gay jokes? No. Is it funny to see two guys dressed as the Ambiguously Gay Duo? Of course. Those were great sketches—Stephen Colbert and Steve Carell did the voices of Ace and Gary, respectively

Yeah, it's always funny to see grown men humiliated, but the reason I linked to this article was because I was totally floored to find out Colbert and Carell did the voices for the Ambiguously Gay Duo. And all this time I thought it was Ian Kinsler and Michael Young.

October 1 - BR Bullpen
Events, births and deaths that occurred on October 1.
1932 - Babe Ruth, as legend has it, calls his home run against Chicago Cubs pitcher Charlie Root in the fifth inning of Game Three of the World Series, won by the New York Yankees, 7-5, at Wrigley Field. Ruth and Lou Gehrig each hit two homers for the Yankees.
1961 - Roger Maris hits his 61st home run of the season against Tracy Stallard of the Boston Red Sox at Yankee Stadium. The homer eclipses Babe Ruth's 34-year-old single-season home run record. The Yankees win the game 1 - 0.
2008In Anaheim, the Red Sox continue their postseason dominance of the Los Angeles Angels by taking Game One of the ALDS, 4 - 1. Jason Bay hits a two-run homer off John Lackey, while Jon Lester gives up only an unearned run in 7 innings of work for the win.
Happy b-day:
1901 - Jimmie Reese, infielder (d. 1994)
1945 - Rod Carew, infielder; All-Star, Hall of Famer
1963 - Mark McGwire, infielder; All-Star

Bourjos Time (say that in your MC Hammer voice):