Basically, a large portion of the suck looks like random fluctuation, or perhaps injuries, or perhaps some other factors going on in their lives, or perhaps a million other variables we can’t consider — in other words, ephemeral badness. Many of these pitchers would go back to being, if not as good as before, at least useful Major League pitchers. That’s not to say Kazmir will.

Sam Miller lets us know that things could be worse...and could get better.

Mets closer Francisco Rodriguez has dropped his grievance against the Mets, accepting that he will not receive the $3.14 million docked from his pay when he was suspended following an August 11 incident with the father of his girlfriend. In exchange, the Mets restored Rodriguez to the active list and agreed to abide by the terms of the remainder of his contract. Rodriguez is set to earn $11.5 million in 2011 with a vesting option for $17.5 million in 2012 if he finishes 55 games next season (or a $3.5 million buyout).

It only cost Rodriguez a little over $3m to punch out the father of his girlfriend. Some would think that was worth it (not me of course).

2010 ALCS: New York Yankees' Mark Teixeira strains hamstring, done for season - ESPN New York
If the Yankees are going to come back from a 3-1 deficit to the Texas Rangers in the ALCS and go on to repeat as World Series champions, they are going to have to do it without first baseman Mark Teixeira. Teixeira severely strained his right hamstring during the fifth inning of the Yankees' Game 4 loss to the Rangers on Tuesday night. Teixeira said an MRI revealed that he will need six to eight weeks to recover. Teixeira remained hitless (0-for-14) in the ALCS. It is the worst oh-fer in Yankees postseason history, surpassing Joe Collins' 0-for-12 in the 1952 World Series, according to ESPN Stats & Information.

With the way Teixeira's been hitting, this is probably a good thing for the Yankees.

Brandon Wood wins an award… - The Orange County Register
Brandon Wood was named co-player of the week for the first week of the Arizona Fall League.

Two things; 1) Hooray for Brandon, and; 2) this is the Register's attempt at doing a link post, except the only stories they link to are their own. And link is usually to the story you just scrolled past...or the one following. Hooray Register!

Braves curiously release OF Cabrera and RHP Saito - CBSSports.com Baseball
"We did not feel there was a market based on the season he had and the cost of going to arbitration with him," Braves general manager Frank Wren said in an e-mail to the Associated Press.

Okay, before you go all "OMIGOD! The Angels should sign him to play left!". Stop. He sucks.

Uecker has successful surgery - JSOnline
Brewers radio broadcaster Bob Uecker underwent a second successful heart surgery Tuesday at Milwaukee’s Froedtert Hospital, the club just announced. The six-hour surgery was performed by Froedtert & The Medical College of Wisconsin cardiothoracic surgeon Alfred C. Nicolosi. "The surgery went very well," said Nicolosi. "We did a limited repair of his pseudoaneurysm without having to redo anything from his first surgery." It is expected that Uecker will remain hospitalized at Froedtert for approximately one week. The recovery time for the surgery is projected to be a minimum of eight weeks.

All our best wishes to Uecker for a speedy recovery.

Below are a few photos from other sites we have a good relationship with. Be sure to click the link below each photo (or on the photo itself) to show your appreciation of their work... 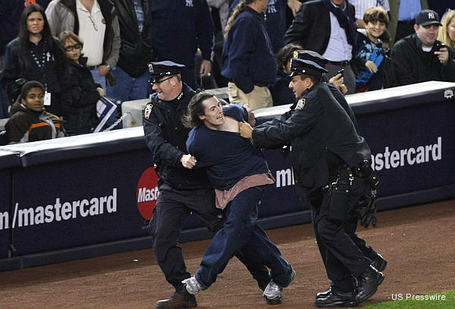 Police: Man who rushed Yankee Stadium field went after A-Rod - Yahoo! Sports
Three uniformed NYPD officers, along with several stadium security guards, collared Grim LeRogue before he could reach Rodriguez in the top of the fifth inning. LeRogue, 33, was trying to confront A-Rod about his relationship with Cameron Diaz.

This is actually kind of scary. (Almost as scary as THIS). No, really, this could've been bad. 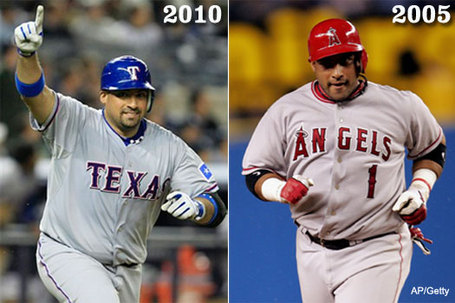 Bengie Molina sticks it to the Yanks — just like he did in 2005 - Yahoo! Sports
By pitching to Molina, however, Girardi may have forgotten some recent Yankees postseason history. In the 2005 ALDS against the Los Angeles Angels of Anaheim, Molina hit three home runs against the Yankees. In Game 1, he smacked a homer off of Tanyon Sturtze(notes). In Game 2, he hit another long ball against Al Leiter. And in Game 3, he took Randy Johnson deep. 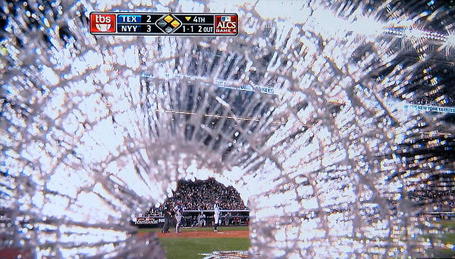 Broken bat of Yankees' Gardner busts TBS video camera - Yahoo! Sports
It's almost art — kind of like a James Bond opening — but it's really just the shattered outer lens of a TBS TV camera. In the fourth inning of Game 4 of the ALCS, Brett Gardner's bat splintered on a grounder to third and the bat's barrel impaled a camera next to the first-base dugout.

Didn't it seem like there were a lot of broken bats last night?

Los Angeles Dodgers sign LHP Ted Lilly to three-year, 33 million dollar deal - MLB News - FOX Sports on MSN
Pitcher Ted Lilly passed on the opportunity to test the free agent market, signing a three-year, $33 million deal on Tuesday to return to the Los Angeles Dodgers. ''I thought this was a really good opportunity for me and the future looks really good,'' he said on a conference call after completing a physical.

There it is, the first off-season signing. (Rumor is, he gets to drive Jaime around Arizona this spring.)

October 20 - BR Bullpen
Events, births and deaths that occurred on October 20.
1900 - The St. Louis Cardinals withhold the final month's pay of all but five players, including John McGraw and Wilbert Robinson, citing late hours, dissipation, and gambling as reasons for the poor showing of the team, which finished tied for fifth place in the National League.
1901 - Seven St. Louis Cardinals, including half the pitching staff and the three top hitters - Jesse Burkett, Emmet Heidrick and Bobby Wallace - jump to the new St. Louis Browns American League team. Do you think the events from the previous year had anything to do with this?
1947 - Radio rights for the World Series sell for $475,000 for three years. Every franchise but Pittsburgh has sold 1948 TV rights. The New York Giants get $400,000 for radio-TV rights from Chesterfield. In 2006, MLB sold the rights to Fox for $3 billion (yes, that a "B" as in BILLION).
1988 - Orel Hershiser pitches a four-hitter and Mickey Hatcher and Mike Davis hit two-run home runs to give the Los Angeles Dodgers a 5 - 2 victory over the Oakland Athletics and the World Series title in five games. Hershiser becomes only the third player to win the MVP honors in both the League Championship Series and the World Series. The win gives the Dodgers their first World Championship since 1981, becoming the only team to win more than one World Series in the 1980s. I hear Mickey Hatcher shows the game highlights on all the team's charter flights (okay, probably not).
1999: Boston eye doctor Carmen Puliafito offers free surgery for MLB umpires during the postseason after umpires blow three calls against the Red Sox during the ALCS. Puliafito, who chairs the ophthalmology department at the Tufts University Tufts University School of Medicine, suspects some umpires are secretly nearsighted. "That's the only explanation I have for these three horrible calls."
2002 - Twenty-year-old Venezuelan righthander Francisco Rodriguez becomes the youngest pitcher ever to win a World Series game. With just 15 days of major league experience, "K-Rod" throws 37 pitches retiring nine consecutive batters in three innings to pick up the victory as the Anaheim Angels outslug the Giants in Game Two, 11 - 10. Tim Salmon goes 4 for 4 with two home runs and four RBI, while Reggie Sanders, David Bell, Jeff Kent and Barry Bonds homer for San Francisco.
Happy b-day Mickey:
1917 - Mickey Weintraub, minor league player and manager (d. 2009)
1928 - Mickey Micelotta, infielder
1931 - Mickey Mantle, outfielder; All-Star, Hall of Famer (d. 1995)