Jered Weaver: The Making of an Ace

Share All sharing options for: Jered Weaver: The Making of an Ace 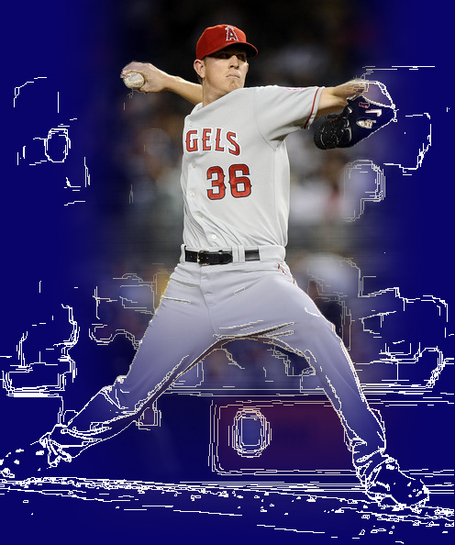 When longtime Angel-ace John Lackey left Southern California for the greener dollars of Boston following the 2009 season, many fans wondered what the club would do to replace the number #1 guy in their rotation.  Although Lackey failed to impress his new teammates on the Red Sox, during his eight seasons in Anaheim, Lackey averaged 13 wins per year while maintaining a career ERA under 4.00.  Lackey also was ace-like in his ability to stay off of the disabled list.  With the exception of tricep problems coming out of spring training during the 2008 and 2009 seasons, Lackey averaged 29 starts per season and regularly pitched 200+ innings.

With Lackey gone and no viable free-agent options, many thought the time was right for 27 year-old Jered Weaver to step forward and assume the leadership role on the Angels' pitching staff.  After all, Weaver was coming off of a season where he compiled career highs in the traditional stats such as wins, innings pitched, and strike outs, while also seeing him maintain or improve such stats as K/9, BB/9, FIP, and WAR which are the sort of advanced metrics the saber-community look up to.

During spring training prior to the 2010 season, Weaver once again began working on a two-seam, sinking fastball looking to reduce the number of fly-balls and to induce a few more groundouts.  Back in March 2010, Mike DiGiovanna of the LA Times wrote that Weaver had experimented with the same two-seam fastball grip used by Angel newcomer Joel Pineiro, but decided to go back to his original grip.  From the March 16th LA Times article:

Jered Weaver, an extreme fly-ball pitcher in his four big league seasons, began throwing a two-seam, sinking fastball in the playoffs in 2008, and he threw it occasionally in 2009, hoping to get a few more early-count, ground-ball outs.

Hoping to refine his two-seamer, Weaver threw it "80% of the time" in Tuesday's 4-3 exhibition win over the San Diego Padres on Tuesday, a game in which the Angels right-hander threw 67 pitches in 3 1/3 innings...

...Weaver, who had a 50% fly-ball percentage last season, meaning half of the balls put in play against him were fly balls in play, is not about to give up on the pitch.

"My pitch count can run up there," Weaver said. "I'm a fly-ball pitcher. If I can get some more ground balls, it will help a lot."

And it looked like it worked.  In 2009, Weaver's groundball percentage was 30.9%, the lowest percentage of all major league starters who qualified for the ERA title.  By the end of 2010, Weaver's GB% had increased to 36% which resulted in the lowest number of home runs allowed per 9 innings in his career.  Obviously any increase in a pitcher's groundball rate will also be reflected in reduced line-drives and fly-balls, and this is exactly what Weaver saw last season.  Although his fly-ball percentage only declined slightly (from 50.4% to 48.2%), Weaver reduced his line-drive rate by almost three percent.  A reduction in line-drives typically goes a long way in a pitcher's success as line-drives tend to turn into base hits.

Another sign of Weaver's improvements were his strikeouts.  Weaver led the major leagues with 233 K's, beating out Seattle's Felix Hernandez by one and the Giant's two-time Cy Young award winner Tim Lincecum by two.  Throughout his career, Weaver has consistently been above average in the number of batters he strikes out per nine innings, but he stepped up his K/9 rate in 2010 by besting the league average by more than 2 batters per 9 innings while increasing his personal rate from 7.42 batters in 2009 to 9.35 last season.

One of the reasons Weaver may have been able to increase his strikeout rate by such a significant amount was by inducing more swings at pitches outside the strike zone.  The number of Weaver's pitches batters swung at outside of the strike increased by a whopping 8.3% to 33.5% (the same percentage as Roy Halladay), ranking him 7th in the majors.  This could be attributed to the improved two-seam fastball mentioned above or possibly because of the increased number of breaking balls thrown.  Weaver threw his curveball almost 5% more often than in 2009, and over twice as often as in 2008.  With the ability to get batters to chase pitches, Weaver was less likely to have to rely on his fastball which he threw the lowest percentage of the time in his career.  The movement Weaver is getting on his pitches may also be the reason he is ranked #1 in swing-and-miss percentage on pitches inside the strike zone.  Overall, Weaver's pitches were the 5th hardest pitcher to make contact with, ranking just behind Lincecum.

If not for lack of run support, there may be more Cy Young talk involving Weaver following his brilliant 2010 season.  The Angels inability to give Weaver some run support is the main reason for his low win total (13), and everyone knows the main-stream media loves those win totals. In 12 of his 34 starts the Angels failed to score more than 2 runs and at one point were shutout three consecutive times when Weaver was on the mound.

2010 wasn't a "breakout" year for Weaver as he's been consistently building on his successes.  However, 2010 was the season he became the Angels' ace.