Torii Hunter - "They're not us", Hideki Matsui Makes Debut: Halolinks

Share All sharing options for: Torii Hunter - "They're not us", Hideki Matsui Makes Debut: Halolinks

Panel Part III: Efforts to develop black talent in USA insufficient - USATODAY.com
"As African-American players, we have a theory that baseball can go get an imitator and pass them off as us," (Torii) Hunter says. "It's like they had to get some kind of dark faces, so they go to the Dominican or Venezuela because you can get them cheaper. It's like, 'Why should I get this kid from the South Side of Chicago and have Scott Boras represent him and pay him $5 million when you can get a Dominican guy for a bag of chips?'

Uh oh. I think Hunter, the most out-spoken and most quoted Angel, just started a shit storm. And as usual, I agree with Calcaterra's take on Hunter's comments (read the entire post).

UPDATE: Torii Hunter responds to all of this on his blog - Torii's Storiis

Angels' bottom line getting a 'Matsui bump' - The Orange County Register
Of more immediate help to the Angels' bottom line were the calls the Angels' sales and marketing department began getting from Japanese companies interested in signing on as sponsors and advertising at Angel Stadium. "We did not anticipate getting calls as quickly as we did after signing Hideki," Moreno said. Those calls have translated into sponsorships totaling "in the high six figures," according to Carpino.

Well played Mr. Moreno, well played. If you've wondered how big of a deal Matsui is in Japan, check out his museum. Be sure to take the virtual tour and "Please click the number of the point to be worried about." 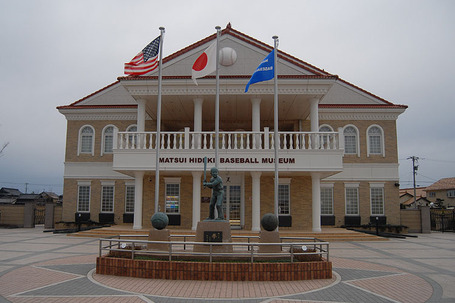 Hideki Matsui finally gets to swing the bat - latimes.com
Matsui struck out and singled to center before being lifted for a pinch-runner in the Angels' win over the Padres."Just seeing him swing the bat was very reassuring," Scioscia said. "Obviously, it's going to take time for him to get his timing, but he looked good. He broke out of the box well."

Below are a couple articles written by Evan Brunell from NESN. It's interesting to read what writers who cover other teams have to say about the Angels, but in these to articles, I found out a couple things that should have been covered by the local media. My apologizes if it has, but I read a ton of stuff everyday, and never read about Tory Hernandez's (Angels Manager of Baseball Operations) take on John Lackey or Joel Pineiro.

Angels Consider Loss of John Lackey to Red Sox 'Minor' - NESN.com
"Everyone is saying that we don't have a No. 1 starter to match up against other No. 1 starters in the postseason," Hernandez continued, addressing a popular storyline for the Angels in spring training. "However, Lackey was never someone that matched up against the No. 1 starters that people seem to be referring to."

New-Look Angels Excited About 2010 Season - Los Angeles Angels - NESN.com
To make up for the absence of Lackey, the Angels brought in former Red Sox pitcher Joel Pineiro, who was yet another Dave Duncan success story in St. Louis."We think he learned how to pitch [in St. Louis]," Hernandez said. "He knows to trust his stuff and pound the zone."

Boo-yah Tory Hernandez! Dissing on Lackey! An interesting tidbit in the Lackey article is, Lackey will get paid the league minimum if he has Tommy John surgery. The Sox were worried about Lackey's elbow and included that to his contract.

That's okay K-Rod, in a few years Gossage won't remember who you are.

MLB in discussions over 'floating realignment' - Sporting News
Under the concept, teams would be able to decide where they'd want to play in a given season based on geography, payroll and willingness to contend. SI.com, citing an unnamed source who is familiar with the discussions, notes that a team couldn't move into a division more than two time zones beyond its home city — say, the Rays or Orioles trying to join the NL West.

Good lord. I have an idea, how about no leagues or divisions? 30 teams play a balanced schedule and the top eight make the playoffs? Nah, that idea sucks too.

The Kindle Blog Report: Halos Heaven (The Los Angeles Angels of Anaheim)
What are its flaws? Well, the blog is updated every day, which is a plus...but a lot of those updates aren't accessible to people with a Kindle. They consist of Youtube videos, or game threads which don't feed over, and so on. On the other hand, if you're a die-hard Angels fan, once the season starts you may want all this material delivered to your door on a regular basis. So I leave that decision up to you!

I wish I had a Kindle, but my desire for one went down a bit if it doesn't get Halos Heaven.