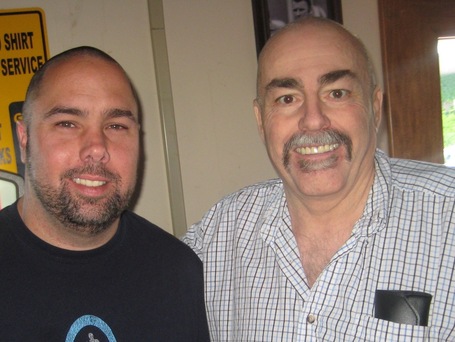 Pictured here, Jason Brennan and Mel from Fullerton reveal the goods - heads freshly shorn of their locks in solidarity with children undergoing chemotherapy treatments for cancer.

On Saturday, Mr. Brennan brought a St. Baldrick's Foundation "Shaving our Way to Conquer Kids Cancer" event to Throwbacks Bar, a stone's throw from Angels Stadium. Over two dozen heads were shaved, including radio host Jeff Biggs and blogger Eric Denton. A raffle of great Angels prizes included tickets to Angels games in April and a silent auction featured a Robb Quinlan street banner that actually got a bid.

Brennan is closing in on his goal of raising $10,000 for the St. Baldrick's Foundation and I can happily report that the Throwbacks Pastrami Burger was superior to all food I have ever had at Angels stadium and that is counting the Diamond Club. I know where I am going to eat before home games this season.