Angels 10, Royals 2 - CBSSports.com
Joel Pineiro took a no-hitter into the sixth inning and the Los Angeles Angels defeated the Kansas City Royals 10-2 on Monday. Pineiro worked 6 2-3 innings, his longest of five spring appearances, and allowed only two hits and a run with two walks and two strikeouts. "They hit some balls right at people," Pineiro said, downplaying the no-hit innings. "The last couple of games. I'm just trying to get ready for the regular season."

Angels 7, White Sox 7 - CBSSports.com
Angels outfielder Reggie Willits played for the first time in two weeks after being sidelined because of a hamstring injury. He went 1 for 3 before being replaced. "We're optimistic that the worst is behind him and he'll be ready to move forward and see when he's ready," Angels manager Mike Scioscia said.

The only "regular" in this game was Mike Napoli (Izturis played SS), but they still managed to get a come-from-behind tie against the projected White Sox opening day line-up. Also, checkout the boxscore below. The Angels used 5 relievers who went 6 innings, giving up 2 hits, one walk, and 8 strikeouts. Not too shabby.

Joel Pineiro impresses with execution in Angels’ win - latimes.com
There is no secret to Joel Pineiro's success. The Angels right-hander goes right after hitters with his sinking fastball and looks for ground-ball outs, the earlier in the count, the better. "The hitters know what my plan is, what we're trying to do," Pineiro said. "It's just a matter of executing."He threw 94 pitches, and 13 of his 20 outs came on ground balls.

I got into an online "discussion" last winter with the son of one of my ex-wives friends (got that?) after I posted on her Facebook page that I thought the Angels should sign Pineiro. I've never met the guy (the kid, not Pineiro...although I've never met Pineiro either. Ah nevermind), but he went off on how crappy that signing would be, spouting ERA, wins, and such. Okay, it's only spring training, but I need to go back and find that conversation because it's going to feel really good to say "I told you so!" at the end of the year.

The Baseball Analysts: F/X Visualizations Archives
First note that the scale here is very small, there is little variation in the number of wins projected across teams in this division. Because the range of win projections is small the differences in win totals across projection systems result in very different orderings. OLIVER and CHONE like Texas, but don't think much of anyone else in the division. The other systems are pretty high on Seattle, while only Vegas thinks much of LA (Rich can take solace in at least someone respecting the Angels). But again because just 5 or 10 wins separates every team in every system there is broad consensus that the division is anyone's to win. 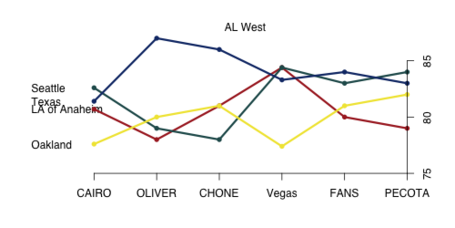 According to these pretty colors, it's the Rangers who are the biggest threat to the Angels this season, and the Angels aren't much of a threat themselves. One thing notable, the only "projection system" to put the Angels on top is Las Vegas...the only entity who make their living off of projections.

Five questions: Los Angeles Angels - Sean Smith - The Hardball Times
5. The Angels have beaten preseason projections regularly. Why is that? They have done a few things right recently, and one is to score more runs than you'd expect given their number of hits, walks and extra base hits. The main reason is because they have hit so well with runners in scoring position. I don't expect that to continue to such a degree, because I don't understand why any player would become a better hitter just because of the situation. If you have the ability to hit .320 when it really counts, why hit only .280 when nobody is on base? You should be hitting your best all the time so the guy behind you can hit with runners in scoring position.

Our friend Sean Smith (RallyMonkey5) and the creator of the Chone player projections looks at the upcoming Angels season. His point about the Angels depth (read the article), is the same as ESPN's Mark Saxon's below.

Angels observations with a week to go - ESPN Los Angeles
To worry about: The reason behind it. When I left Arizona after my second stint with the team, I was struck by how much worse off they are in the high minor leagues than I realized. A lot of these spring training games are decided when the regulars are already at home sipping a cold beverage. The Angels Triple-A caliber talent is not impressive. Remember Sean O'Sullivan, Trevor Bell and Anthony Ortega when they made spot starts for the Angels last year? Not impressive. You don't need 25 guys to get through a major-league season. You usually need about 30 and the Angels look dangerously thin in the organization.

Should I be worried?

Los Angeles Angels bullpen returning to form - ESPN Los Angeles
"We have a nice bullpen going, I'm going to be honest with you," Hunter said. If Hunter is right -- and early indications suggest he could be -- the Angels will return to the formula that has been central to their success in the Mike Scioscia era: stifling, hard-throwing relief. A year ago, the Angels hardly looked like themselves for most of the season, their bullpen fumbling away game after game. The Angels' 4.49 bullpen earned-run average was worse than all but three teams in the American League (Cleveland, Baltimore and Kansas City) and the other three each lost at least 97 games. The Angels won 97, but largely in spite of their bullpen.

The return of "Old Time Hockey", I mean Angels baseball. The Angels bullpen could shorten games to 6 innings.

My cable system carries the MLB Network on channel 666. I think it's only appropriate when they show Yankee/Red Sox games.

Famous Red Sox Fan To Publish New Baseball Novella - Walkoff Walk
Stephen King was once the Most Famous Author in America. (The current titleholder is Stephenie Meyer.) Now he's just one of many Celebrity Red Sox Fans. That doesn't mean he hasn't stopped writing. King will soon release a new novella, Blockade Billy, described by King's website thusly: He may have been the greatest player the game has ever seen, but today no one remembers his name. He was the first -- and only -- player to have his existence completely removed from the record books. Even his team is long forgotten, barely a footnote in the game's history. Every effort was made to erase any evidence that William Blakely played professional baseball, and with good reason. Blockade Billy had a secret darker than any pill or injection that might cause a scandal in sports today. His secret was much, much worse... and only Stephen King, the most gifted storyteller of our age, can reveal the truth to the world, once and for all.

This could be really cool.

What to watch Tuesday: Ambidextrous Yankee facing Chipper Jones? - Daily Pitch: USATODAY.com
The Yankees' Pat Venditte, who went 4-2 with 22 saves and a 1.87 ERA for two Class A teams last season, is ambidextrous, so he chooses which hand to throw with depending on which side of the plate the opposing hitter stands on. Naturally a right-hander, Venditte uses a six-finger glove.

This could be Stephen King's next book!

The Minnesota Twins made the biggest headlines in spring training - Jon Heyman - SI.com
Between some very big injuries, one extremely big signing, a trio of superb prospects and a couple budding controversies, it's been quite a spring so far. With just a week to go, here's my spin on the biggest Cactus and Grapefruit league storylines.

Some interesting stuff in this article.

Frank McCourt's wife seeks nearly $1M per month - FOX Sports on MSN
When asked if Jamie McCourt would accept her husband's $150,000 offer, Wasser said outside of court that the figure wouldn't even cover the mortgage for one of the homes. He added the mortgages had been paid through February, but his client is behind on her attorney fees by $800,000. Wasser estimated her legal bills could reach as high as $9 million. Meanwhile, Frank McCourt continues to live in luxury despite claims the economic downturn has hurt his businesses. Wasser said Frank McCourt attended the Super Bowl and recently spent as much as $80,000 on a Caribbean vacation.

I sorry if I've said this before, but this shit never gets old. Do either of these nitwits realize how ridiculous all of this makes them look? $80K vacations. $9M attorney fees. $1M per month spousal support. I don't feel sorry for either of them.