First Pitch
In his first nineteen at-bats of 2010, Wood has swung the bat 4 times.  And of those first nineteen at-bats, the pitcher has thrown Wood a first-pitch fastball (two-seam, four-seam, and cut) 12 out of 19 times.  In those 12 at-bats, Wood took the pitch for a strike 7 times, fouled off 2, took 2 for balls, and grounded out once (Wood hasn't swung at and missed the first pitch this season).

After the first pitch, Wood is behind in the count in all but 4 at-bats.
(Note: strike swinging includes foul balls)

Second Pitch
Now that Wood has taken the first pitch, his typical at-bat has him swinging at the second pitch, and that pitch could be anything.   Pitchers have thrown an even amount of fastballs, sliders and change ups to Wood, but the result is the same, Wood will swing at it if it's close.

Third Pitch
If Wood's at-bat lasts until the third pitch he's swinging at that pitch (only 6 of Wood's at-bats have lasted longer than 3 pitches).  Wood has not taken a third pitch for a ball in any of his at-bats this season and the only time he's taken a strike is when he was ahead 2-0 and when he didn't swing at a curveball.  Otherwise he's hacking.

Of those 7 swinging strikes, just 2 were fouled off.  What's troublesome is typically a pitcher will "waste" a pitch when he has a batter down 0-2 and Wood is swinging at a pitch that is usually out of the strike zone.

Conclusion
So far this season, the typical Wood at-bat goes like this; Take a first-pitch fastball for strike one, swing at the next pitch regardless of the type, and then he'll swing through a fastball or be fooled by an off-speed pitch for strike three.   Obviously Wood is "pressing" and appears over anxious in his nineteen at-bats.  Playing an air chair psychologist, it seems Wood is laying off the first pitch in order to not appear over anxious, but once that first pitch is out of the way, he's hacking...at anything.   As shown in the below graph, he's swinging and missing at pitches either out of the zone or over-matched on fastballs. 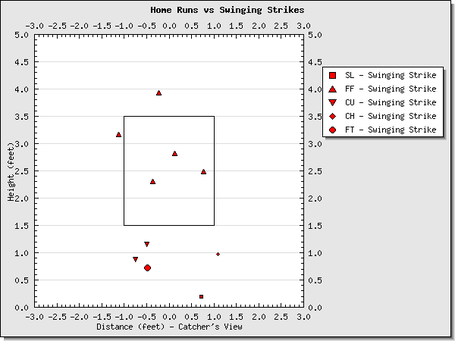 The good news is he's only swung and missed 10 times this season (out of 65 pitches).  The bad news, not putting good swings on pitches in the zone.

It might be time for Wood to swing at a few of those first-pitch fastballs, at least until pitchers stop throwing them.