As reported live on our FaceBook page yesterday, All Star Game Mania has hit Anaheim! The big announcement at Tuesday's All Star Game Press Conference at Angel Stadium's Diamond Club is that ticket strips for the Game itself (bundled with the HR Derby, Futures Game and other festivities over 5 Days this July) are being made available via random selection from a registered pool. Register AT THIS LINK beginning at 10 AM today for a chance to purchase All Star Tickets.

The first jersey for the All Star Game was presented to Anaheim city manager Tom Wood, who happily posed for Halos Heaven with his personalized swag (the back of the jersey is numbered #10 with the player name "Wood"... the Angels maybe hoping it foretells the fate of their 3Bman...) 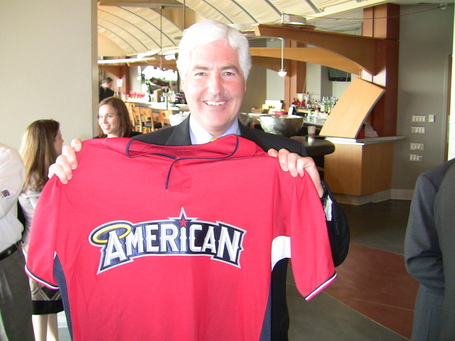 Lots more pics after the jump...

I learned one thing at the press conference that I did not know before I attended it... 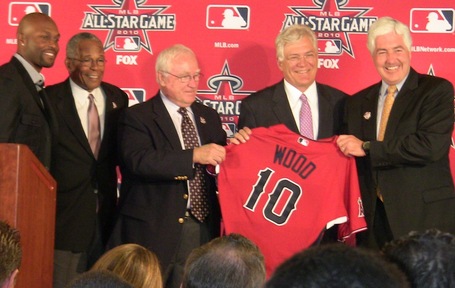 (ABOVE) Bob DuPuy (center), MLB's #2 guy, has his last name pronounced "Dew-PAY"... Have read it all these years and never heard it pronounced until emcee Victor Rojas introduced him. 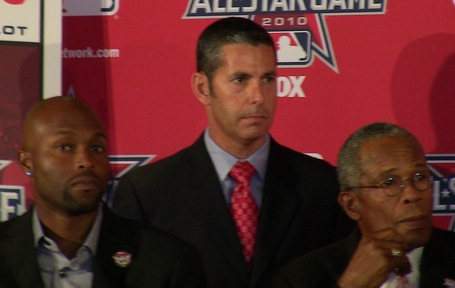 (ABOVE) Torii Hunter appears to be shooting me his "We Don't Take No Mess" look while Victor Rojas and Rod Carew listen to a speaker onstage at the press conference. 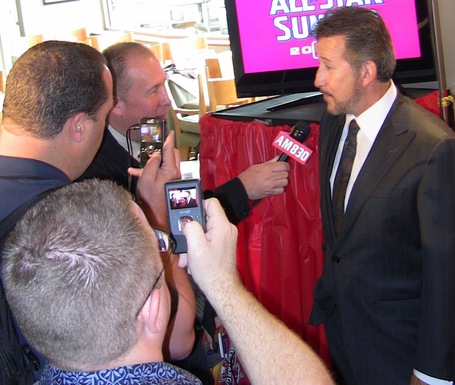 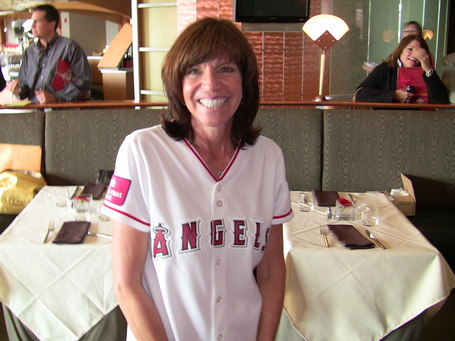 (ABOVE) the only reserved seat at the press conference was for Christine Shively, a 2009 People Magazine/MLB All-Star for her charitable efforts on behalf of those enduring chemotherapy. It was noted that after amassing a few dozen volunteers to help her knit/crochet caps for balding chemo-sufferers, the publicity she generated from her All Star Game appearance in 2009 inspired over 500 volunteers to join her in this cause. 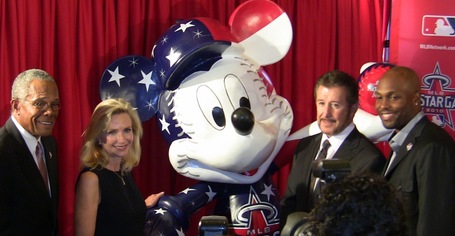 (ABOVE) Get used to these Micky Mouse All Star statues as they are going to be all over the City of Anaheim leading up to this summer's game. Maybe they should use one as the logo for those "We Are Not L.A." shirts, as, hey, Mickey is the symbol for Anaheim. Rod Carew and Carol Moreno squeeze in on the left with Mickey Anaheim Mouse, Arte Moreno and Torii Hunter. Interesting to note that in the press kit they gave me, the Angels are referred to as "The Angels" with no appendage, even in groupings of player names and their affiliated teams, the others revceive City and team name billing, the Angels fly solo, needing no introduction. 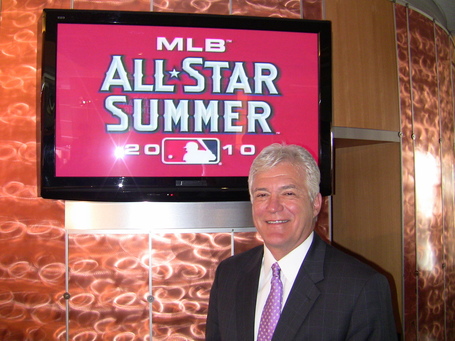 (ABOVE) Angels Chairman Dennis Kuhl waxed nostalgic for the 1967 All Star Game in Anaheim, which he attended with his father, noting that baseball's greatest power is to give us memories. He gave good recap of the 1989 All Star Game (aka the Bo Jackson game) as well. It is always reassuring when a team has personnel who effortlessly reveal their deep connection to the sport.