Share All sharing options for: Tonight I Played Poker With Jose Canseco 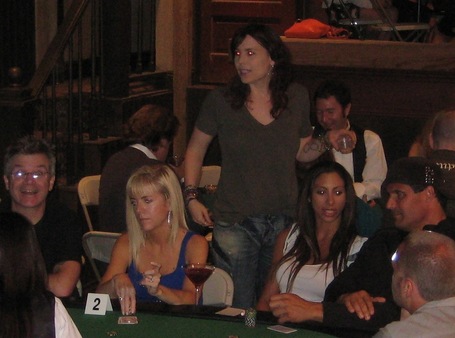 I played poker in a charity tournament Saturday night with Jose Canseco. I got into three hands with him:

So I got a net of 2,425 in chips from Jose Canseco. I did not ask him to retract that 1986 statement about Wally Joyner not being able to carry his jockstrap but a little vindication on Wally's behalf was carried out.

From 7 tables, there were 2 and I finished 14th, out of the money/prizes. When the tables consolidated, I got seated at a table with Annie Duke but did not go up against her before my trip 4s lost to a straight on the river.

Canseco was mellow, knows his poker, likes to throw chips around and get in hands. He chases, bluffs, bets more than he checks and does not have a "bad mojo" vibe at all. He was still buff, not fat, and his date had more plastic inside her bra than all the poker chips melted down would have added up to.

All of the money went to a good cause, the Edgemar Center for the Arts in Santa Monica. My friend Mike Napoliello is one of the center's patrons and he entered me into the tournament - Thanks MIke!

Annie Duke cracked someone's aces with her Ace King at another table, she was all giddy about it and came and told the poker pro at our table. There was a "celebrity" and a poker pro at every table, I didn't catch the name of the cat in the Full Tilt hat at mine but he was patient and cool. Jose was our table's celebrity and he was there to win. The guy who played Mini Me and Camryn Manheim from The Practice teeve show (this according to a watchful Missus Halofan) made the final table. Top prize was a trip to Vegas, HA, just got back from there two nights ago!