Share All sharing options for: Rex Hudler Reunites with Angels

Broadcaster and former major leaguer Rex Hudler will be back with the Angels as a radio broadcaster - he will be doing a Tuesday afternoon radio show on AM 830 KLAA prior to Angels home games live from Downtown Disney's ESPN Zone. 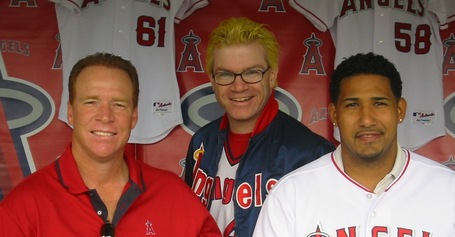 It is not known whether this is the ratings-hungry influence of AM 830's new ESPN affiliation (as I predicted ON APRIL 27 would cause something like this) or a rebuilding of burned bridges between the much-loved loose cannon commentator and the top-button-buttoned Angels corporate chain of command.

One thing is for certain - Angels phone operators and letter-readers will get a respite from the overwhelming spontaneous outpouring of Hud-love from Angels fan faithful, who reportedly bent the ear of management on the topic of Rex's return with more passion and volume than even the legendary 2004 outcry over the team's name change.