Angels director of scouting Eddie Bane was interviewed by Jeff Biggs and Jason Brennan on AM-830 earlier today. He gave KLAA's listeners Six and a half minutes of great radio. Lots of talk in this audio link below about the ANgels recent drafts and a definitive statement about who the Angels are targeting: Bane says the Angels are likely to draft a high school pitcher in the first round but stopped short of saying exactly who.

If the site traffic to that audio link is too high for you to successfully activate it, the Bane talk has also been posted at Eric Denton's L.A. Angels Insider blog for your perusal.

RGHAN's Take: Bring on the Prep Pitchers. Here's a quick look at the top-tier high school arms potentially available at the 18th Pick

AJ Cole: Good FB, better than average slider and split. Has a change that could be average to a tick above.  I like the FB/split combo, though the Angels don't have a recent track record of developing that pitch with their home-grown starters.

Stetson Allie: Great fastball, great slider. Does have a change. Command, stamina, and price tag issues.  Combine his superior fastball with the questions, and I can't help but get a Jordan Walden vibe, but Allie's delivery is much smoother and should come with less risk.

Special thanks to Jeané Blunt at AM-830 for preparing this audio for us. 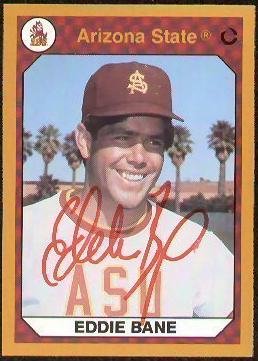 Eddie Bane played his college ball at Arizona State. His autographed college card has a ten dollar asking price on the internet.