Ervin Santana struck out 6 in 7 innings as he became the 4th Angels starting pitcher this season to beat the Dodgers. Only Joe Saunders missed out on facing the blue boys and will not be the SP over the next two nights. Bobby Abreu blasted a 3-Run HR in the 6th and Kevin Frandsen hit a 2-Run Double in the 7th for some late scoring that made a loser out of Clayton Kershaw.

The Abreu blast was the big blow but Howie Kendrick broke the tie with a single in the next inning. While Frandsen's insurance was nice, what was best about that inning was that the 2nd out of it was Juan Rivera getting picked off of 3B - but that downer of a situation was mitigated by four straight Angels hits: Jeff Mathis, a Brandon Wood single to right, the Howie base hit and the Franny mash down the line.

Tell me you want invest in THIS fangraphs stock market: 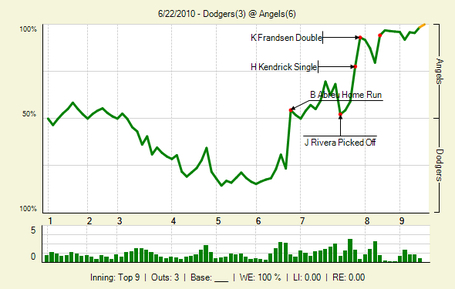 Angels are 4-0 against the Dodgers and remain 3.5 games behind the bankrupt Texas Cakewalkers.