When someone of "celebrity" status dies, their passing is often accompanied by remembrances not quite worthy of the life they lived. That is definitely not the case with the man whose death was announced today, that of John Robert Wooden. If anything, the memorials will likely fail to capture this man’s unique gifts, knowledge, and understanding of basketball but more than that, of life and it’s challenges.As a young man, I was fortunate enough to attend John Wooden’s basketball camp over 4 consecutive summers (1971 – 1974). As a normal budding teen, I had lots of questions with too few answers that coincided with the time I attended his basketball camp. One document that helped me was his "Pyramid of Success". The pyramid didn’t answer my questions, but it did provide a framework of behavior to follow whether looking for answers, or competing, or for many of the other vicissitudes of life. I have posted his pyramid for you to draw your own conclusions.

What impressed me most about Mr. Wooden was his humility. At the time I attended his camp, the UCLA teams he coached were winning NCAA championships with such regularity they seemed pre-ordained. He could have cashed in this success with a healthy NBA career. Instead, he chose to continue coaching at the collegiate level and running his basketball camps because he so much enjoyed teaching and working with youth.

He was as approachable as your favorite grand-parent, and equally warm. The day I asked him to autograph the attached "Pyramid of Success" provides an example. I heard he was in the coach’s office, so I went there to ask for the autograph. He was eating his lunch with the other coaches, a combination of his assistants at UCLA and high school coaches from Pacific Palisades High School. They were deeply engrossed in a discussion of basketball strategy. I was somewhat embarrassed that I had interrupted their lunch and discussion. One of the coaches gave me a look that I interpreted as "Go away, kid". Wooden put down his sandwich and immediately autographed the document. He then asked me some questions, such as my age, how many years I had attended the camp, what I liked about the camp, and what I thought would help me learn more. I was really too stunned to give more than cursory responses. He again wished me well, and said to come back to talk anytime I wanted.

Mr. Wooden finally gets to re-unite with his life long love - his wife Nell - that preceded him in death by about 20 years. Thanks you sir for some memorable years of college baskeball. Thanks for the "Pyramid of Success". More than anything, thanks for all that you helped me learn, about basketball and life. May your timeless, classic lessons and ideas continue to thrive. 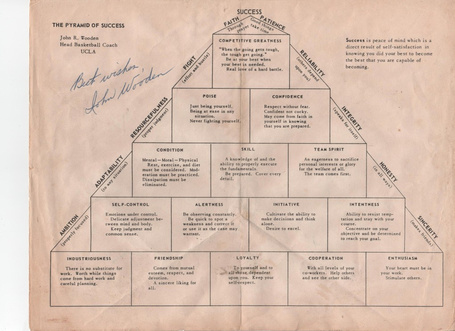