Angels Bats Slumber into Break, So Does Front Office. Halolinks.

Share All sharing options for: Angels Bats Slumber into Break, So Does Front Office.  Halolinks.

Angels are breaking bad with their latest loss - latimes.com
Especially after the week the Angels endured. Here is the trip by the numbers, for the viewing pleasure of the rest of the American League West: The Angels were outscored, 44-14, batted .189 and fared even worse with runners in scoring position, hitting only .152. The Angels have lost eight of 10 games going into All-Star break, dropping three consecutive series for the first time since July 2007. It is the first time the Angels head into the break out of first place in the AL West since 2006, when they finished second in the division. The Angels scored more than two runs only once on the trip, splurging for six Friday in their only victory. Minor league journeymen Aldridge and Paul McAnulty have become staples of a lineup that appears in need of being bolstered before the non-waiver trade deadline at the end of the month. "Hopefully we can get somebody," Hunter said, "but if not, we have to do what we have to do."

It's not that the Angels are losing, it's the fact that the Angels are losing with players like Aldridge and McAnulty consistently in the lineup. Any game that I see them step up to the plate is like the front office saying to me, "This game doesn't matter, we don't care anymore. But hey look, we have the All-Star game!" Have some highlights: Abreu hammers a solo shot for the Halos - Bobby Abreu rips a solo home run to right-center field, his 10th of the season, as the Angels try to claw back in the eighth inning, Weaver fans seven over six frames - Jered Weaver strikes out seven Athletics over six innings of work, An Oakland fan makes a nice catch on a foul - A fan in Oakland makes a nice play on a foul ball in the top of the sixth inning (not only does he make a nice catch, but he earns the "good guy" award by giving the ball to a kids sitting behind him).

I realize HH already has a Futures Game article posted, but these two include video of Conger and Trout: Angels prospects steal Futures show - Conger was more than happy to share the stage -- and the plaudits -- with super-prospect Mike Trout, who put on a dazzling show as the youngest player in the game. "He's a tremendous talent," Conger said. "This was an unbelievable experience -- a great day for the young Angels." Angels prospect Conger wins Futures MVP - "It's awesome," Conger said, clinging to his Larry Doby Award following the United States' 9-1 victory over the World team. "There's a lot of adrenaline going right now. It's just great. To win this award, with my friends and my family here. My dad was right there behind the plate. This was a great experience. "I really want to thank my organization for allowing me to participate in this game, to give me a chance to play with all of my buddies. Being in SoCal, living 15-20 minutes away, it's unbelievable."

Is Napoli more valuable to Angels as trade chip? - The Orange County Register
Napoli's increased strikeout totals (84, fourth in the American League) and poor hitting with runners in scoring position (.164 including 28 strikeouts in 67 at-bats) diminish his impact in the Angels' lineup and might make him expendable -- even though he represents one of the team's few power threats. "He's a high-strikeout, high-walks hitter. His walks are down this year (22) but his strikeouts are part of the package with a power hitter," Angels manager Mike Scioscia said. "Mike's got a big swing. It's high-risk, high-reward.
ABREU STRIKEOUTS Until a few days ago when Tigers rookie Austin Jackson passed him, Angels outfielder Bobby Abreu led the American League in an unwelcome statistic – called third strikes Abreu has been called out on strikes 27 times this season. Abreu's offensive game (and reputation) have been built on a disciplined approach at the plate and strong sense of the strike zone. While admitting he was surprised by the called-third strike totals, Abreu didn't see it as a sign that he had become too passive at the plate or was losing his feel for the strike zone. "The way I look at it," he said. "Most of them have been balls. What can you do about it? "I've been doing that my whole career. Why should I change?"

Besides the Napoli portion of this post, there's a quick bit about the number of times Bobby Abreu has taken a called third strike. Abreu says, "Most of them have been balls", but have they? Here's what pitch/FX has to say... 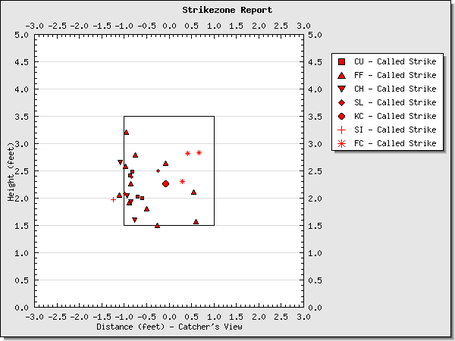 Yeah, according to the above chart he's been jobbed...3 times. But here's something, maybe he should start looking for a pitch on the outside part of the plate the next time he's got two strikes on him (thanks to Joe Lefkowitz's Pitch/FX site for the chart).

As a beautiful place for a ballgame, Angel Stadium has it all over Dodger Stadium - latimes.com
Baseball prefers Angel Stadium and, frankly, so do I. This, even though some of the best memories of my adult life have been laced together at Dodger Stadium.I love Dodger Stadium's heartbeat. But as I grow older, I also like to watch a baseball game without worrying about a jammed parking lot or soggy bathroom or 20-minute wait for a Dodger Dog. If I'm looking for the perfect baseball evening, I go to Angel Stadium, and even my Dodgers diehard friends do not blame me.Walking into Angel Stadium, with its wide, clean concourses and comfortably spaced seats, is like opening a sunroof. Walking into Dodger Stadium, with its low ceilings, dark corners and claustrophobic concourses, is like clenching a steering wheel.As both bosses noted, these aren't so much stadiums as homes. Our homes. And you know what they say about homes. Although Southern California baseball's soul was born in Chavez Ravine, its heart is in Anaheim.

I think going to Dodger Stadium feels more like going to your grandparents house for the afternoon, while going to Angels Stadium is like hanging out at your girlfriend's place. When you go to Chavez you know you're going to have to put up with the smell of a geriatric cave, the latter invites you in for a good time.

And now, two of the local fish-wrap curmudgeons kiss the commish's behind...

Bud Selig: Arte Moreno 'has had the right touch' - Bill Shaikin - latimes.com
He is the First Fan, more at ease at a game with a hot dog in hand than at a podium before a national television audience. The lobby in his Milwaukee office features baseball-themed carpets, a sofa with bases as cushions and bats as armrests, and a clock that plays "Take Me Out to the Ballgame" on the hour.

Baseball thriving again thanks to Selig - Mark Whicker - The Orange County Register
Major League Baseball has become a web-savvy fountain of money and prestige, with a legitimate, if imperfect, drug testing program and the most peaceful labor situation in the four major sports.

Orioles complete 4-game sweep at Texas - Associated Press - Sporting News
The Orioles (29-59) hadn't won any of their 14 road series this season before Texas.

Mark Cuban in bidding for Texas Rangers - NYPOST.com
Dallas Mavericks owner Mark Cuban is taking another run at buying a Major League Baseball team. Cuban has emerged as a bidder for the Texas Rangers, joining forces with former sports agent Dennis Gilbert and Texas businessman Jeff Beck to make a play for the bankrupt baseball team, according to a source close to the situation. "I think Cuban is serious," the source said.

July 12 - BR Bullpen
1949 - The major league owners agree to install warning tracks made of cinder in front of outfield fences prior to the start of next season.
1955 - At Milwaukee's County Stadium, Stan Musial comes to bat in the bottom of 12th inning of a 5 - 5 All-Star deadlock. American League catcher Yogi Berra complains about his feet hurting and Musial tells him "Don't worry, I'll have you home in a minute"... then 'the Man' hits a game-winning home run on the next pitch.
1979 - After a delay of an hour and 16 minutes, the White Sox are forced to forfeit the second game of twi-night doubleheader against the Tigers when over 5,000 fans refuse to leave the field during Disco Demolition Night. Mike Veeck's promotion involves admitting fans for 98 cents with a disco record, collecting the vinyl and then literally blowing up the LPs and .45s in center field.
Happy b-day:
1983 - Howie Kendrick, infielder Howie and warning tracks share the same birthday!
R.I.P.:
1892 - Alexander Cartwright Hall of Famer (b. 1820) 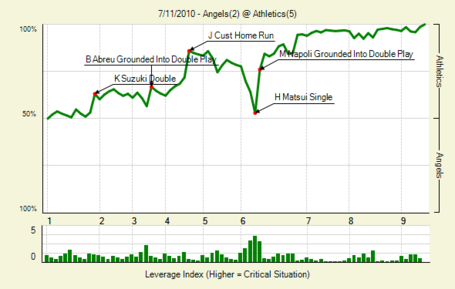