Angels Open Half With Win, Scioscia Doesn't Like Rentals. Halolinks.

Rested, but not ready: M’s clobbered by Angels - The Olympian - Olympia, Washington
Erick Aybar and Bobby Abreu drove in three runs apiece, Joel Piñeiro won his seventh straight decision, and the Los Angeles Angels returned from hosting the All-Star game with an 8-3 victory over the Seattle Mariners on Thursday night. Los Angeles pounded out 16 hits against the Mariners, with every starter except All-Star cleanup hitter Torii Hunter getting at least one.Seattle has lost eight of 10 to its AL West rivals this season.eattle Aybar and Jeff Mathis had three hits apiece as the Angels methodically pounded Seattle starter Doug Fister (3-5), who gave up 12 hits and six runs while pitching into the sixth inning of his fourth consecutive loss. Piñeiro (10-6) had no such problems while giving up six hits over seven innings. After a slow start to his first season with the Angels, the right-hander had won six consecutive starts before getting a no-decision last Friday in Oakland despite leaving with a 5-3 lead after seven innings. Piñeiro has started each of the Angels’ last three victories while becoming their first 10-game winner this season, beating All-Star ace Jered Weaver.

Good way to start the second half, hopefully this continues for awhile. It's also good to see Pineiro doing so well. Many thought that once he left St. Louis and Dave Duncan he'd revert to his prior ineffective self, but he's continued to provide the Angels with consistent quality starts. One of the best free agent signings in baseball. Highlights (some plates and a couple Frandsen defensive plays): Kendrick plates Mathis with a double - Howard Kendrick plates Jeff Mathis with a double to right field, Abreu plates Aybar with a two-bagger - Bobby Abreu plates Erick Aybar with a double to left field, putting the Angels on top, Frandsen throws home to nab Ichiro - Kevin Frandsen fields the ball and throws home to retire Ichiro Suzuki in the fifth inning, Frandsen snags Ichiro's liner to end inning - Kevin Frandsen snags Ichiro Suzuki's liner to end the top of the seventh inning.

Mariners-Angels Preview - FOX Sports on MSN
Los Angeles (48-44) gave Weaver his normal five days' rest entering a matchup with Seattle (35-54). The right-hander is 5-0 with a 2.30 ERA in seven home starts against the Mariners. But Weaver has been struggling, posting a 6.57 ERA en route to losing his last two outings. In his last start, Weaver surrendered five runs in six innings of a 5-2 loss to Oakland. Weaver did strike out seven, giving him the major league lead in that category with 137. Felix Hernandez's 131 strikeouts put him third on that list. Despite an excellent first half, Hernandez (7-5, 2.88) failed to make his second straight All-Star game. Hernandez has been particularly sharp in recent weeks, going 4-0 with a 1.39 ERA in his last six starts. He has tossed nine innings four times over his last five outings. Hernandez is 4-6 with a 4.40 ERA in 18 starts versus Los Angeles.

LA Writer: Why Rangers are better than Angels - Dallas Morning News
The Texas Rangers have a more potent offense, a superior defense and a far better bullpen than the Los Angeles Angels, while the team's rotations are an even match. But as much as the between-the-lines factors favor Texas this season, it's what's going on between the ears of the Rangers that will probably end the Angels' reign of American League West titles at three in a row. ...They have the look and feel of a winner, a swagger, and they got better with last week's acquisition of ace left-hander Cliff Lee from Seattle. ...This has the feel of 2006, when the Angels struggled to sustain a productive offense, played erratic defense and failed to make the playoffs. Prediction: The Angels won't reach the playoffs for only the second time since 2004.

Buying or selling? American League teams gear up for second half - USATODAY.com
Buy, sell or wait: Wait. The rest of July will give Los Angeles a better idea of what it needs and it could be one more bat to fill the void left by Kendry Morales' broken leg. But Scioscia said he doesn't like the idea of getting a player for a half season. It could be better to work with what they already have.

Who Do the Players Find Overrated? - FanGraphs Baseball
#3: Gary Matthews Jr., 5% This one is spot on. Matthews basically parlayed one decent year and one fantastic catch into a $50 million contract and whined when he couldn’t get playing time with the Angels. Why would he be considered overrated, after the Mets finally dumped him last month? Possibly because he managed to make the opening day lineup for the Mets in center field, despite the fact that he’s just plain not good: GMJ has posted a total of -1.1 WAR since 2007.

Really? Wow, I don't think we would have figured that one out on our own.

Anonymous Doofus' Antics Make Me Sympathize With Gary Carter - Walkoff Walk
This anonymous goon raises a stink and eventually gets tossed from the event for being a total horse's ass. Imagine that, using your kid, who probably has no idea who Gary Carter even is, as a pawn to get some merch signed so you can flip it on eBay. Pathetic. Even worse: this guy's dumb YouTube video made me sympathize with Gary freakin Carter.

I wasn't going to include this link mainly because I didn't want to give this asswipe any more hits on his youtube account, but then realized it's probably better to point out how moronic this guy is. It's also on Deadspin: We Seriously Underestimated How Mad At Gary Carter This Autograph Hound Is 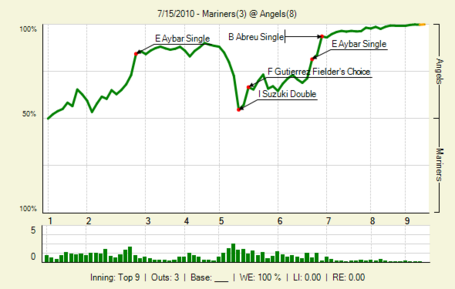 July 16 - BR Bullpen
Events, births and deaths that occurred on July 16.
1921 - At age 63, Arthur Irwin, pioneer player, manager, and executive who began in the National League in 1880, jumps to his death from a ship in the Atlantic Ocean. Interesting story about one of the first players to use fielding gloves...

Arthur Irwin - Wikipedia, the free encyclopedia
In July 1921, he was a passenger on the vessel Calvin Austin as it steamed from New York City to Boston when he mysteriously disappeared. Irwin, 63, was presumed drowned. Within days of his apparent suicide, it was discovered that Irwin had led a "double life" for 30 years, with a wife and child in Boston and a common-law wife and three offspring in New York. He was apparently successful in keeping these arrangements secret; they only came to light after his death. According to one report, Irwin had learned that he had an incurable disease just before his ill-fated steamer trip. Said his legal wife, in Boston, upon hearing of Irwin's double life: "I feel confident and happy in the belief that, although he had this other woman in New York, he was on his way to me when he died … He turned to me as the woman he loved at the last. He wanted to die in my arms." Another possibility was he realized he was heading to Boston.