No Support for Santana, Off Day Homework. Halolinks

Share All sharing options for: No Support for Santana, Off Day Homework.  Halolinks

Angels' Ervin Santana could sue for nonsupport after 2-1, 10-inning loss to Seattle - latimes.com
For the Angels, it was another futile offensive effort in a game started by Ervin Santana. The right-hander did not receive a decision after giving up only one run in seven innings. He is 0-2 in his last three starts despite pitching at least seven innings in each game and compiling a 2.31 earned-run average, largely because his teammates have averaged one run of support in those outings. "Ervin's been as consistent as anyone in our league," Angels Manager Mike Scioscia said, "and we just didn't get him the support this afternoon." Hunter, who aspires to be a general manager after his playing career ends, sounded like Scioscia when asked about the schedule. "This stretch is very important," Hunter said, "but for me, Tuesday [against the Yankees] is more important than anything. We have to take it one game at a time."

No! It's like "The Invasion of the Body Snatchers". Scioscia has finally infected the last hold-out for spontaneity as Hunter is now sounding like the boring quote machine. It's a sad day...a sad day indeed. Get your highlights here: Napoli jacks a solo shot to left-center - Mike Napoli goes yard off Jason Vargas in the bottom of the second to put the Angels on top, 1-0, Santana strikes out seven over seven innings - Ervin Santana strikes out seven over seven innings of work. And your low-lights: Langerhans scores on Santana's wild pitch - Ryan Langerhans comes home after Ervin Santana throws the ball away in the fifth.

Angels need their GM to step up - The Orange County Register
In recent weeks, Daniels has crushed Reagins by trading for pitcher Cliff Lee – who’s better than anyone the Angels have, including Jered Weaver – and Bengie Molina, who joined Texas just in time to hit for the cycle, the home run being a go-ahead grand slam. Meanwhile, the Angels used someone named Paul McAnulty as a pinch-hitter in the 10th inning Sunday. A few minutes later, they were designating McAnulty and his .136 average for assignment, which is the baseball equivalent of having your position out-sourced to India.

My favorite "Lou Brown" quote, and something I remind my wife of daily, "You may run like Hayes, but you hit like shit".

But the bullpen corrals Ryan Raburn.

Memories of Keith - Bugs & Cranks
It’s not that it isn’t a good story — it is. It’s simply because — celebrity or not — it’s one of the most embarrassing pieces of communication of my young-ish life.

Kind of a funny story, but it gives an example of today's off-day assignment; Have you ever made an idiot of yourself when meeting a ballplayer? If so, please tell us your story in the comments below. 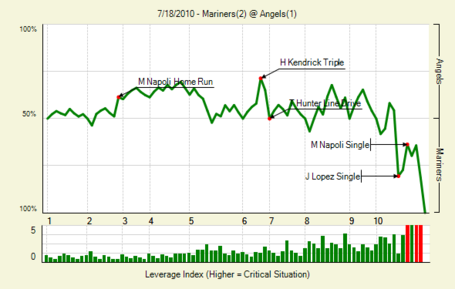 July 19 - BR Bullpen
1952 - The visiting Fitzgerald club (Georgia State League) sends up 12-year-old batboy Joe Reliford to bat as a pinch hitter in the eighth inning of a game with Statesboro. The black batboy, who theerby breaks the league's color barrier, grounds out, but makes a fine catch in the outfield when he stays in the game. Umpire Ed Kubick, who approved the move, will be fired by the league the next day.
2002 - Anaheim OF Tim Salmon strokes five hits in the Angels' 15 - 3 win over the Mariners. He drives home five runs in the contest, including three on his 15th home run of the year. The Angels score eight runs in the 6th inning to break open the game.
2009 - John Lackey and rookie Brett Anderson are locked in a scoreless pitching duel for 9 innings before a solo homer from Bobby Abreu in the 10th inning wins the game for the Angels, 1 - 0 over the A's. Abreu had earlier broken Anderson's bid for a perfect game in the 7th. Ah, the good-old-days. I remember them fondly. When the Angels could win extra-inning, pitchers duels. Makes me sort of nostalgic.
Happy b-day:
1895 - Snake Henry, infielder (d. 1987) Former teammate of Mongoose Ted.

I hate you Kevin Jepsen (but just for today):