Phil Hughes tagged for six runs as New York Yankees drop first of two-game series to Angels, 10-2 - NY Daily News
The Angels roughed up Hughes for six runs in five-plus innings, cruising to an easy 10-2 victory over the Yankees Tuesday night to begin a two-game set at the Stadium. Hughes had hoped to follow up his stellar outing against the Mariners before the break, but the Angels tagged him for nine hits and he walked three, marking the fourth time in his past six starts that he has allowed five or more runs. The Yankees didn't help Hughes much, scoring two runs against Sean O'Sullivan in the first inning before going into shutdown mode. O'Sullivan used his changeup to lull the Bombers to sleep, combining with three relievers to shut them out over the final eight innings.

The Angels are 6th in the league in home runs, but still this was unexpected (at least to me it was). As the Angels look to add some punch to their offense, the team goes out and stomps on the Yankees in New York. Additionally, they get a good start from a pitcher just brought up from the minors, which is also surprising since we've been told the Angels lack minor league depth. I suppose we shouldn't get too excited, as the Angels are still 5 games behind Texas, but any positives at this point are worth celebrating. And speaking of celebrating, here's some highlights: Swisher goes deep into the right-field seats - Nick Swisher clubs a solo homer into the seats in right to give the Yankees a lead in the first. Did anyone else think, "Oh crap, here we go. Game over" when Swisher hit this? Matsui sends a two-run homer into the seats - Hideki Matsui's fly ball clears the wall in right, plating two runs to push the Angels' lead to six, Napoli belts a two-run homer to right - Mike Napoli gives the Angels a bigger cushion with a two-run shot to right and then adds this later in the game, Napoli sends a two-run single up the middle - Mike Napoli's base hit up the middle with the bases loaded pushes the Angels' run total to 10, Izturis cranks a two-run homer to right - Maicer Izturis puts the Angels in the lead with a two-run homer to right that chases in Juan Rivera

Angels-Yankees Preview - FOX Sports on MSN
Right-hander Joel Pineiro looks to win his career high-tying eighth consecutive decision Wednesday when the Angels go for their first series victory at the New York Yankees' new ballpark. The veteran sinkerballer became Los Angeles' first 10-game winner after allowing three runs in seven innings of Thursday's 8-3 victory over Seattle. "Hopefully that's a good start for us in the second half, and we can keep on rolling," said Pineiro, who has a 2.51 ERA since his last defeat June 1. Javier Vazquez (7-7, 4.45) allowed four runs and six hits in that game, suffering the loss in his first home start since returning to the Yankees (58-34) for a second stint. The veteran right-hander is looking to build off one of his strongest outings of the season in a 4-1 loss at Seattle on July 10. Vazquez retired 17 of the first 18 he faced and did not allow a hit until the sixth inning.

Rev and I will be doing a MUTECAST during today's game starting at 11am (pacific time). There will be an audio player dropping into the game thread at that time, or else you can go to the Halos Heaven blogtalkradio show page.

Angels might not get what they need - FOX Sports on MSN
Royals infielder Alberto Callaspo, a switch-hitter, is on the Angels’ "short list" of targets, major-league sources say. The addition of Callaspo, a possibility first reported by ESPNLosAngeles.com, would bring the Angels a hitter with — ahem — a .309 on-base percentage and .721 OPS. "That would put them over the top," a rival executive cracked. But Callaspo, according to a rival executive, would satisfy manager Mike Scioscia’s liking for versatile, switch-hitting infielders — see Erick Aybar and Maicer Izturis.

Scioscia expects Matsui to 'be very productive' - latimes.com
Coming out of the All-Star break, Manager Mike Scioscia said he expected Hideki Matsui to "be very productive in the second half" and to end up with "numbers that are comparable to what he did in New York last season." So far, the numbers don't add up.

Prospect injures his arm - ESPN Los Angeles
Catcher Hank Conger, one of the Angels' top three prospects, injured his right arm on a swing Monday and was put on the disabled list because of a right rotator-cuff strain. Conger has had his right shoulder surgically repaired.

Cuban named serious bidder for Rangers - Victoria Advocate
Dallas Mavericks owner Mark Cuban, who last week announced his interest in the Texas Rangers, was named as an undisclosed but serious prospective bidder for the team at a bankruptcy hearing Tuesday. After Dallas attorney Clifton Jessup told the court he represented an undisclosed bidder, Hall of Famer Nolan Ryan's lawyer blithely destroyed any confidentiality by saying the person was Cuban.

When hitting coaches take over. 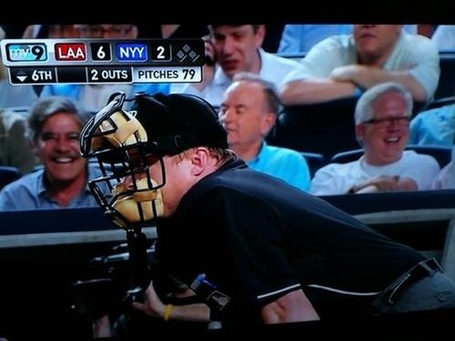 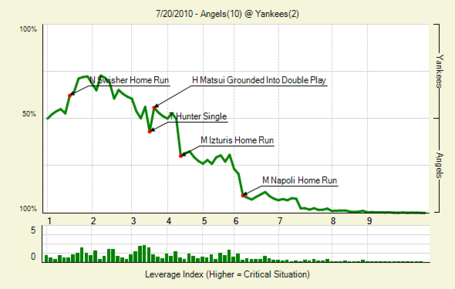 July 21 - BR Bullpen
Events, births and deaths that occurred on July 21.
1959 - Under intense public pressure and the Massachusetts Committee Against Discrimination investigation, the Red Sox become the last club to integrate. Fourteen years after the club passes on Jackie Robinson, despite a successful tryout in 1945, Elijah 'Pumpsie' Green pinch runs and plays shortstop to become the first black to play for the Red Sox.
1961 - With each team stranding 15 base runners, the Angels and Senators tie the major-league record for runners left on base by two clubs in a 9-inning game. Los Angeles wins 16 - 5.
2001 - The Angels defeat the Orioles, 6 - 5, in 10 innings. 3B Troy Glaus hits a pair of home runs, making him the fastest Angel ever to the 100 career home run mark.
Happy b-day:
1861 - Perry Werden, infielder (d. 1934) The "Babe Ruth" of the early minor leagues.