Angels-Rangers Preview - 7/22/10 - FOX Sports on MSN
Matchups with staff aces don't seem to faze Jered Weaver, who is set to try and keep pace with Cliff Lee. At Texas, though, Weaver has had trouble regardless of who is pitching for the Rangers. Weaver will take part in a matchup of All-Star pitchers, with Lee (8-4, 2.59) making his third start for Texas (55-40) since being acquired in a trade with Seattle. Weaver outdueled Mariners ace Felix Hernandez in his last start, allowing two runs in seven innings of a 3-2 victory Friday night. Weaver has matched up with Hernandez three times this year, going 2-0 with a 0.84 ERA. "I take the same approach no matter who I'm facing," Weaver said. "I trust my game and I trust what I'm throwing up there." But Los Angeles has lost the last six games that Weaver has started at Texas. The right-hander has a 6.17 ERA during that stretch, surrendering seven runs in two of his last three outings. Lee, meanwhile, has won four straight starts versus the Angels, posting a 1.91 ERA, and is 6-3 with a 3.18 ERA in nine outings against them all-time. Lee is facing an Angels team that is hitting .329 while averaging 5.8 runs over its last six games. Los Angeles had 15 hits against New York on Wednesday, but still lost 10-6.

This is it. This is the season. There are five possible outcomes from this series, three of which, without some sort of miraculous event, would end the Angels chances of reaching the post season. The five outcomes are:

Angels caught with Scot Shields down, 10-6 - latimes.com
Scot Shields was just beginning to regain the confidence of Manager Mike Scioscia, the veteran reliever rebounding from a rocky two months to give up one earned run in 11 innings of eight appearances from June 15 to Tuesday. Then came the seventh inning in Yankee Stadium on Wednesday. Shields replaced starter Joel Pineiro in the seventh and struck out New York's Robinson Cano to open the inning. The next four batters went homer (Juan Miranda), single (Curtis Granderson), single (Francisco Cervelli), three-run homer (Colin Curtis), the Yankees pulling away for a 10-6 victory. Pineiro (10-7) had won seven consecutive decisions entering the game, posting a 2.51 ERA during the stretch, but he was roughed up for six runs and 11 hits in six innings and suffered his first loss since June 1. "Everything was up in the zone, the changeup, the curveball, and even the sinker," said Pineiro, who gave up one run and five hits in seven innings of a 5-3 win in Yankee Stadium on April 14. "I had to find a way to get the ball down. I was able to do that later in the game, but it was a little too late."

Trade deadline buyer: Los Angeles Angels - CBSSports.com
The Angels will find a way to get one of the big bats and add at least one reliever. Reagins is going to have to gut what's left of his farm system to do it, so he'd better hope it works.

I think Reagins will wait until after the 4-games series in Arlington before pulling the trigger on any trades. If the Angels win at least 3 of 4 against the Rangers, the Halo GM should look into making a deal to improve their chances this season. If the Angels manage to split the series (or worse), trading away young players for a shot at a division title in 2010 would be a waste.

Fun with Wins Above Replacement - American League Edition - The Baseball Analysts
Nothing against Fregosi or Erstad but for a proud franchise like the Angels with a particularly strong recent history of success, one would just think that names with more zing than Fregosi or Erstad might sit atop their best ever list. 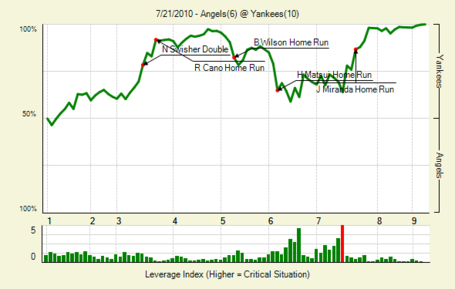