Angels can't get to Cliff Lee in 3-2 loss to Rangers - latimes.com
"Any time Cliff's on the mound, we want to take advantage," said Texas third baseman Michael Young, who hit a solo home run against Angels starter Jered Weaver in the first. "Cliff has such a great tempo, and he keeps the defense involved. We're always on our toes and ready to make plays." That, the Rangers did. Right fielder Nelson Cruz, with his back to the plate, made a running catch of Howie Kendrick's fourth-inning drive before crashing into the wall. Second baseman Ian Kinsler dived to his left to stop Bobby Abreu's fourth-inning grounder and, from his knees, threw to first. Left fielder Josh Hamilton made a running catch of Abreu's sinking liner toward the line to open the ninth, and Cruz made a sliding catch of Hunter's vicious line drive to right for the second out. "They played some defense," said Hunter, a nine-time Gold Glove winner. "They D'd us up like Michael Jordan. We hit the ball hard and had nothing to show for it. Their defense won the game. They have some sick athletes, man." The Angels have Juan Rivera. And Abreu.

I'm in a bad mood. The reason is, I'm in this relationship with this team and it's not going well. This team used to treat me really good, like I mattered. And we had this mutual respect for each other. That's all changed now, I realized the bitch is lyin' to me. When I read crap like this..."the Angels had acquired Kansas City third baseman Alberto Callaspo, who has two extra-base hits in his last 25 games yet was described by Manager Mike Scioscia as a hitter with 'the potential to be something special'"...it makes me feel like they just don't care anymore. "Something special"? Are you kidding me? Something special isn't league average. Something special isn't a clone of two other nothing specials that are already on the team. Something special just pitched his ass off for the team ahead of you in the standings. Bitch. Anyway, here's what happened last night: Napoli swats a solo shot to left field - Mike Napoli connects on his 18th homer of the season, a solo shot to left field, Vlad legs out a double in the sixth inning - Vladimir Guerrero hustles and picks up a double in the sixth inning, Weaver fans five over six frames - Jered Weaver strikes out five in six solid innings of work.

Angels-Rangers Preview - 7/23/10 - FOX Sports on MSN
C.J. Wilson looks to re-establish his home success as the Rangers try to beat the Los Angeles Angels for the 10th time in 13 meetings at Rangers Ballpark on Friday night. Texas has won nine of 12 at home against the Angels, taking all three meetings this season by holding them to a .192 batting average. Wilson (8-5, 3.23 ERA) will try to continue that trend by improving upon his 6-2 home record. Wilson is 0-1 with an 8.10 ERA in two starts against the Angels this season. The Angels give the ball to Joe Saunders (6-9, 4.83), who has never fared well against the Rangers. The left-hander is 3-6 with a 7.19 ERA in 10 starts against Texas, losing all five starts in Arlington with an 11.68 ERA. Saunders has been dreadful in his last two road starts, giving up 13 runs in 8 1-3 innings. He allowed five runs and 10 hits over six innings Saturday at home against Seattle before leaving without a decision in a 7-6 win.

Callaspo/O'Sullivan/Smith Trade Link Roundup & Analysis - Royals Review
This may turn out to be dead wrong, but (and this might surprise some) I just can't help but feel that the Royals did well here to get just about anything for Callaspo. I know it's the Angels, but we're talking about an OK player who mysteriously got worse in his age 27 season thanks to a precipitous drop in his walk rate. They can't find a better option at a lower price? It's not like .750 OPS guys are impossible to find. And it isn't like the Angels are a great environment for him getting a little more patient either. Obviously Callaspo's past presence in the Angel system played a role here. They see the potential. Really though, "peak" Callaspo is a little bit like "peak" Nebraska: yea, the Sand Hills are sorta picturesque in places, but sometimes they aren't even really hills, much less peaks.

Here's what the Royals' SBN site has to say about the BIG trade.

Callaspo Reunites With Aybar, Anaheim Hot Dog Sales Plummet - The Red Carpet - SB Nation Los Angeles
McCarthy described the events of "Weenie Wednesday," a hot dog giveaway at the stadium. The team was given 50 hot dogs in the clubhouse, and that’s when the naked duo of Callaspo and Aybar had some locker room fun

Los Angeles Angels in the outfield have Jered Weaver steamed - ESPN Los Angeles
This was the teams' two best pitchers hooking up, a key play or two deciding the outcome. The Angels didn't make them. The Rangers did. And the ability to catch the ball might be the biggest difference between these teams right now. The Rangers have young athletes at virtually every position. The Angels are wobbly on the corners, both infield and outfield. The divide in athleticism -- and maybe just talent -- between the Angels and Rangers is a bigger problem for the Angels than the six-game deficit in the standings. That, too, is a problem. The Angels haven't been this far out all season. Quote of the day "I think we match up with them, we just haven't played to the level we need to." -- Scioscia on taking on the Rangers. (and whose fault is that?)

One of the points from "Moneyball" was Billy Beane's ability to take advantage of under-valued skill sets. In the book it was OBP, but recently the trend has been towards defense. Obviously, the Angels don't agree with under-valued assets, as they haven't bought into the value of high on-base percentages, and now, the value of good defense.

This is what the Ranger fans think of the Angels manager: 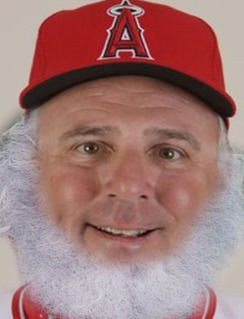 "Somebody stole me lucky charms"

Security shrugs as O's mope runs laps around Camden Yards - Big League Stew - Yahoo! Sports
The security in Baltimore apparently have a view on crowd enforcement that's just a bit different than their friends up in Philadelphia. Watch as some Orioles fan runs around the field at Camden Yards on a wild Thursday night and the Baltimore police don't even display a passing interest in detaining or stopping him.

They were probably waiting for the sniper to get a clean shot. Or not. Whatever. 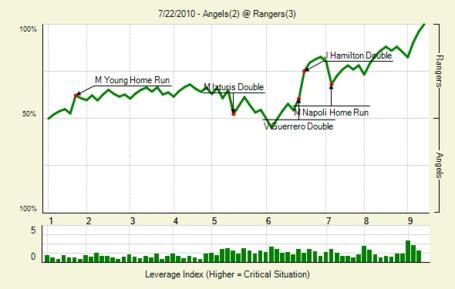 Obviously, Vlad's double was the turning point in the game. Which makes it even more irritating as it could have been avoided with some routine play by Abreu.

Fah Que Abreu, and Young, and Hamilton, and Lee, and Rivera: