Angels lose to Rangers, 6-4 - latimes.com
The Angels' Trevor Bell (1-2), making his first major league start since August, allowed 10 of the 18 batters he faced in 3 1/3 innings to reach base, with two of the outs he recorded coming on the basepaths after he gave up a hit. Nevertheless, there was late drama after Hideki Matsui hit a two-run home run in the seventh inning and the Angels brought the tying run to the plate in the ninth inning against closer Neftali Feliz. Hunter and Matsui opened the inning with singles to put runners on first and third with none out. Alberto Callaspo drove in a run with a fielder's choice, but Feliz retired the next two batters to record his 28th save. "Three out of four, they did what they had to do," Hunter said. "They did their thing. We came to their house and they held it down.

The Angels suffered the second-worst of outcome scenarios in Texas losing 3 of 4 games to the Rangers and falling 7 games out of first and just a half game ahead of Oakland. Have some highlights: Torii torches a homer to straightaway center - Torii Hunter hammers a homer to straightaway center to get the Halos on the scoreboard in the top of the second inning, Andrus makes an amazing diving stop at short - Elvis Andrus makes an awe-striking play at short, diving in the hole for a grounder, then firing a laser across the diamond, Mathis takes a huge hit to make a huge tag - Jeff Mathis withstands a violent collision at home plate with the Rangers' Chris Davis, but somehow hangs onto the ball for the out, Matsui mashes a two-run shot to deep right - Hideki Matsui hammers a two-run home run to deep right field, his 13th of the 2010 campaign.

Red Sox-Angels Preview - FOX Sports on MSN
While Haren isn't slated to take the mound until Wednesday's finale, the opener features a solid pitching matchup between the Angels' Joel Pineiro (10-7, 4.18 ERA) and Boston's Clay Buchholz (10-5, 2.81). Both are trying to bounce back from disappointing losses. Pineiro allowed six runs and 11 hits in six innings of Wednesday's 10-6 loss to the Yankees, his first defeat since June 1. The right-hander was 7-0 with a 2.51 ERA over his previous eight starts. Buchholz, 2-2 with a 6.35 ERA in four career starts against Los Angeles, gave up four runs and eight hits in 5 2-3 innings of a 17-8 win over the Angels on May 3.

Here's what's being written about the Dan Haren deal...

Haren reacts to his trade to the Angels - Video - MLB.com: Multimedia
Dan Haren speaks to the media about being traded to the Angels for Joe Saunders and three prospects

Trading Tony does it again - Lyle Spencer - MLB.com
The Angels' general manager once again has pulled the trigger on a potentially explosive midseason deal. That's three in three seasons, Mark Teixeira and Scott Kazmir having preceded new Angels starter Dan Haren to Anaheim.Reagins said he might not be done shopping, and he has no financial constraints. If the right bat surfaces at the right cost, he'll make a stealth move, as he always does. The guy moves in the shadows, BlackBerry attached to his ear, and when he emerges he tends to make things happen. The GM must like the organizational depth on the mound, having detached six arms to acquire Haren and Alberto Callaspo.

Haren helps, but maybe not enough for 2010 - CBSSports.com
Things were going so bad for the Angels that one scout who just finished touring the American League West said this weekend, "Oakland has a better chance of catching Texas than the Angels do."

Angels acquire Haren - MLB Facts and Rumors - CBSSports.com
Well, that was a shock.

Dan Haren trade surprising, but is it good for Angels? - Ken Rosenthal - FOX Sports on MSN
OK, they got me. Frankly, I should have expected it. The Angels usually operate in stealth fashion, and frequently pull off surprises.

Angels fleeced D'backs in Haren deal - Yahoo! Sports
The Angels depantsed the Arizona Diamondbacks. They stole Dan Haren(notes) in a trade and left the directionless D’backs naked and with nowhere to hide.

Angels Acquire Dan Haren - FanGraphs Baseball
In a deal that comes as a major shock to the system, the Angels have acquired Dan Haren from the Diamondbacks. The Angels were never mentioned during the discussion of potential destinations for Haren, so this deal flew under the radar until it’s completion and subsequent announcement.

Kazmir won't be ready to return any time soon - The Orange County Register
Left-hander Scott Kazmir is eligible to come off the DL on Monday. But don't look for the struggling left-hander to rejoin the Angels' rotation any time soon. Kazmir was supposed to resume throwing sooner and even throw a bullpen session during this weekend's series in Texas. But he underwent an MRI on Thursday during which dye was injected into his shoulder. It will likely take two weeks for Kazmir to progress to long toss and possibly throw in a simulated game or rehab assignment before returning to the Angels' rotation. 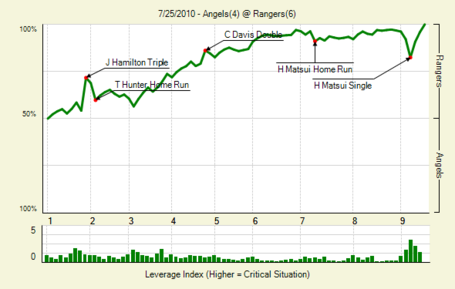 July 26 - BR Bullpen
1992: California's Von Hayes collects three ribbies on a bases-loaded single. Rene Gonzales scores from first base on the 2-out single as the Angels beat the Tigers, 4 - 3. Hayes' is the second 3-RBI single this year.
2008 - Garret Anderson becomes the first player in Angels franchise history to score 1,000 runs. The Los Angeles club tops the Orioles, 11 - 6. The big star of the day is Torii Hunter, in his second day back from bereavement leave. Hunter homers twice, singles once, walks twice, scores four and drives in five to lead the charge.
Happy b-day:
1984 - Kevin Jepsen, pitcher