Red Sox-Angels Preview - FOX Sports on MSN
Lackey doesn't anticipate boos, but he knows the Angels crowd will be behind Jered Weaver (9-6, 3.22 ERA), who replaced Lackey as the Angels' ace this season. ''(Leaving the Angels) was just one of those things, and that's the way the game is these days,'' Lackey said. ''There were only a certain amount of places that I would have considered leaving for, and this was one of them. It's been great. It's been a really easy transition. The guys in the clubhouse have made it easy. It's a good group of guys, so it was easy to fit in.'' Lackey is 9-5 with a 4.36 ERA with the Red Sox, starting slowly but rounding into form. He has been durable after arm strains affected his past two seasons with Los Angeles, pitching into the seventh inning 14 times in 20 starts for Boston.

Boo? Why would anyone boo John Lackey?? In fact, I heard it's "John Lackey Night" at the stadium. Anyone who comes dressed as a jockey gets in free.

Dan Haren's debut is a hit, but not the kind the Angels had in mind - latimes.com
Haren was diagnosed as having a bruise on his forearm and is scheduled to be reexamined Tuesday by Dr. Lewis Yocum, the Angels' team orthopedist. "It hurt, but I didn't feel it hit any bone," Haren said, adding that he hoped to throw off a mound Wednesday to test the arm and make his next start as scheduled Saturday. "That was the good thing. "Ortiz hit a solo homer against Haren in the third inning and a towering two-run shot off reliever Fernando Rodney in the eighth, sending the Angels to their fifth defeat in six games. They fell into a virtual tie with Oakland for second place in the American League West, a season-high 7½ games behind Texas — and nine back of the Rangers in the loss column. Hideki Matsui tried to revive a slumbering offense with a two-run homer off Boston reliever Scott Atchison in the eighth, but it wasn't enough on a night when the Angels failed to score after loading the bases with no outs in the second inning and were 0 for 8 with runners in scoring position.

I didn't get to see the game (frickin' work always ruins everything), but when looking at the boxscore, if Rodney and Kohn hadn't given up those four runs, the Angels woulda/coulda won this game? Welcome to Anaheim Mr. Haren. Anyway, have a highlight or two: Abreu gives the Angels an early lead - Bobby Abreu smashes a solo blast to right-center field to put the Angels ahead 1-0 in the first inning, Matsui's homer is reviewed by umps, upheld - Hideki Matsui hits a home run to right-center that is reviewed by the umpiring crew, and upheld, Haren is hit by comebacker, leaves the game - Dan Haren exits his Angels' debut in the fifth inning after being hit in his right forearm by a line drive from Kevin Youkilis, Haren strikes out eight, leaves debut early - Dan Haren strikes out eight over 4 2/3 innings of work, then leaves the game after being hit by Kevin Youkilis' comebacker

National writer: Angels' trade for Haren 'reeks of desperation' - Dallas Morning News
Reaction to the trade is starting to come in from writers around the country. So far, several reviews don't seem to be very favorable for the Angels. Chris Ruddick of Canada's The Sports Network writes that he doesn't understand how the trade improves the Angels' pitching.

Hey look! The Dallas Morning News finally found someone who doesn't think the Angels made a good deal for Haren! Too bad Defsiuohgf Moslkhget of the Iran News service was too busy to comment on this deal, or else the DMN would have had two people who thought it was a bad deal for the Halos.

Bench him: Figgins in need of a slip on the wrist, or more - Seattlepi.com
I hope when Figgins opens his mouth again and is ready to talk, he'll apologize to Wakamatsu and his teammates for his outburst last Friday. But we all know that will never happen. When the Mariners played in Anaheim earlier this month, I'll bet Figgins told his former teammates that he wished he'd never signed with Seattle and was still playing for the Angels. Hey, Chone, most Mariner fans feel that way too.

This really surprises me. I had never heard anything negative about Figgins while he was in Anaheim. (By the way, what's a "slip on the wrist"?

Coghlan goes on DL after celebration injury | MLB.com: News
Excessive celebration after a dramatic walk-off win has proven costly for the Marlins."When Wes hit the walk-off, I went to pie him in the face," Coghlan said. "When I jumped, I landed wrong on my knee. That's how I got injured."

Ha! How dumb is it when one of your players gets hurt celebrating a win? Wait. What?

Explaining Red Sox's ratings plummet - SweetSpot Blog - ESPN
One fairly surprising note from the piece: the Angels of Anaheim have the second-worst share in the majors, just a hair ahead of the A's. And it's not because of the standing; the Angels' ratings are actually up nearly 12 percent from last year. There might simply be some measurement issues here.

Edmonds hits a foul ball, then homers - Video - MLB.com: Multimedia
Jim Edmonds hits a fly ball to right that just goes foul, then hits the next pitch for a homer to right-center in the eighth inning (nice catch by the fan too)

The "Greatest Ultimate Frisbee Catch of All Time" (UPDATE) - Deadspin.com
This clip is from Seattle Sockeye playing Boston Ironside at Worlds this year in Prague. 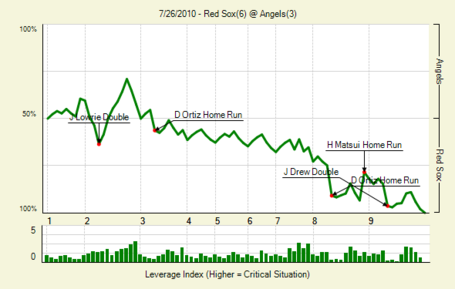 July 27 - BR Bullpen
1970 - The Yankees beat California, 5 - 2, behind Mel Stottlemyre, who is helped by Gene Michael in the 9th. With the score tied, Michael pulls the hidden ball trick on Angel pinch runner Jarvis Tatum. The Yanks score three in the 10th to win.
1982 - Against California, Oakland's Rickey Henderson steals his 95th base but gets caught stealing three times in an 8 - 7, 13-inning California win. Not since 1916 has an American Leaguer been thrown out three times in a game. Rickey will be thrown out 42 times this year, breaking the mark of 38 caught stealings set by Ty Cobb in 1915. Bob Boone, who is behind the plate, homers for the Angels. Reggie Jackson and Brian Downing also homer and Jackson adds two doubles. Boone. Bob Boone. Bitch.
1995 - The White Sox trade pitchers Jim Abbott and Tim Fortugno to the Angels in exchange for minor league outfielder McKay Christensen and pitchers Andrew Lorraine, Bill Simas and John Snyder.
1999 - The Angels' 11-game losing streak ends as they defeat the Devil Rays, 10 - 5.
2002 - The Mariners defeat the Angels, 3 - 1, ending Jarrod Washburn's 12-game winning streak, the longest in the majors this season. Hey! We're all going streaking!
Happy b-day:
1880 - Irish McIlveen, outfielder (d. 1960) I think he was from Spain.
1975 - Alex Rodriguez, infielder; All-Star Last year he had Kate Hudson popping out of a cake. The year before it was Madonna. I hear this year it's Jeter.
R.I.P.:
2003 - Bob Hope, owner (b. 1903)