More than once in his days as the Angels' ace, John Lackey called out his teammates for lack of support. Jered Weaver must know how he felt. The Angels' former ace and his former understudy hooked up in a pitchers' duel Tuesday night as Lackey returned to Angel Stadium for the first time as a member of the Boston Red Sox. Booed lustily by his former hometown fans, Lackey came out on top as the Red Sox beat the Angels 4-2. "Scoreboard talks the loudest," Lackey said of the rude reception he received. "Tough night tonight. The guys in that (locker) room don't feel real well about the way they played. We're better than we've played for awhile now," Angels manager Mike Scioscia said. "We shot ourselves in the foot too much tonight and Jered Weaver pitched his heart out."

It was a good game for a baseball fan, a horrible one for Angel fans as this game highlighted what's been wrong with this club in 2010; lack of clutch hitting, wasted excellent starting pitching, a poor bullpen, and lousy defense. At least "the guys in that locker room don't feel real well about the way they played." Highlights: Abreu's solo homer trims Halos' deficit - Bobby Abreu hits a solo homer to right-center field, trimming the Angels' deficit in the eighth inning, Hunter jumps at the wall to rob Cameron - Torii Hunter jumps at the center-field wall to make the grab, robbing Mike Cameron in the eighth inning (here's the look he gave Cameron as he came off the field)

Making his second start since coming off the disabled list, Beckett looks to lead the Red Sox to a three-game sweep of the Los Angeles Angels and a winning record on their 10-game road trip, which concludes Wednesday afternoon in Anaheim. Beckett started opening night for Boston, but rarely looked like his usual self, allowing opponents to bat .305 off him before he landed on the DL on May 19 with a lower back strain. Returning Friday night at Seattle, the former World Series MVP didn't earn a decision in Boston's 2-1 victory but limited the Mariners to one run over 5 2-3 innings while throwing fastballs clocked at 95 mph. "It's what we have been working toward,'' said Beckett, who is 2-3 with a 4.13 ERA in eight career starts against the Angels. Scioscia's club is now in danger of falling to the .500 mark at the latest point in a season since it finished 2003 with a 77-85 record. Having Joel Pineiro (10-7, 4.18) on the mound at home may be Los Angeles' best chance to avoid that fate. In his first season with the club, the right-hander is 7-2 with a 2.37 ERA in 11 starts at Angel Stadium - including 6-0 with a 1.75 ERA in his last eight outings there.

Lackey disappointed by boos, leads Sox past Angels - Sporting News
John Lackey expected a little appreciation of his eight years with the Los Angeles Angels. He got mostly boos in his return to Orange County, perplexing the Angels' former ace.He didn't expect the fans to root for him, but he also didn't expect the chorus of boos that hit him before the game, between innings and again when he left after giving up Bobby Abreu's homer on his 124th pitch."Nobody wants to get booed like that," Lackey said. "The scoreboard talks the loudest. ... That won't be forgotten, for sure." His former teammates didn't think much of the reception for their former ace. "The ovation that he got tonight wasn't quite what I thought he'd get," said Jered Weaver, who narrowly outpitched Lackey until the seventh. "I mean, this guy has done too much for this organization for eight years, and to get an ovation like that was very disappointing. "People don't understand what happens behind closed doors. All they see is him going to our so-called rival in the playoffs, but he's a great guy and was a great mentor. I enjoyed my time with him, and I'm glad he was here. I owe a lot of where I am today to that guy."

Weaver makes a good point about fans not knowing what goes on behind closed doors, but that doesn't change the fact that fans do know what players say to the press. Once Lackey donned the the uniform with "Boston" across the front and started running his mouth about the type of fans who show up at Angels Stadium, the boos should have been expected. Check out the beginning of this video and the fan reaction to Lackey taking the mound in Anaheim: Lackey hurls 7 1/3 frames of two-run ball. Lackey gets the last laugh however, and his "scoreboard" quote is hard to dispute.

Dan Haren doesn't figure to miss a start - latimes.com
Haren said he "should be on track" to make his next scheduled start Saturday against the Texas Rangers at Angel Stadium after X-rays and an examination by team orthopedist Lewis Yocum revealed no serious damage.
Also within this post...
Owner Arte Moreno has often expressed his disdain for the "rental player," a veteran who is acquired in July or August despite the possibility of losing that player to free agency in the winter. But General Manager Tony Reagins said Tuesday that he has not ruled out the possibility of trading for one"We believe at times it's appropriate, and at times it's not appropriate," Reagins said. "It depends on the needs you have to fill and what you have to give up. You can't limit yourself. If an opportunity makes sense, you have to pursue it."
And...
Center fielder Peter Bourjos is on a tear at triple-A Salt Lake, batting .469 (23 for 49) with three home runs and five doubles in his last 10 games, and his move to left field Sunday and Monday could be an indication the Angels are preparing to call him up. But Reagins said the move "is part of the development process" for Bourjos, who is batting .312 with 11 homers, 10 doubles, 12 triples and 27 stolen bases in 96 games.

Sam Miller also wonders about Juan Rivera in this article:
Juan Rivera may not be killing rallies for long - Angels blog : The Orange County Register
Since then Rivera has been almost the definition of "replacement level." He added just 0.4 Wins Above Replacement in the final three months of 2009, and has been worth 0.1 WAR in the first four months of 2010. So, it’s been bad. And there are clues that it could end soon. On Sunday, Peter Bourjos — normally a center fielder — played left field for Salt Lake. It was just the third game he had played left in his career, but on Monday he was in left again. Bourjos is a defensive star, nearly Erstadian in center field, so there’s hardly any reason for him to move to a corner spot unless the Angels plan to play him there soon in the big leagues.

Listen to the Red Sox announcers from last night's game commenting on the play of Juan Rivera...Lowrie's two-run double puts Red Sox up. They weren't too impressed. Here's the look Weaver gave to his left fielder after the play: 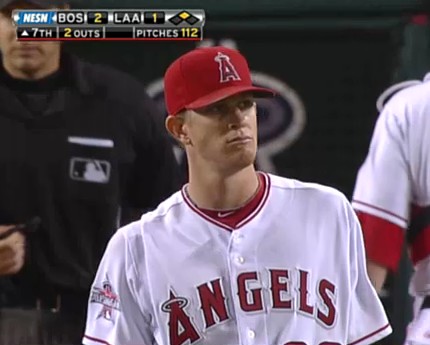 Bubble teams stuck between a rock and a hard place - Tracy Ringolsby - FOX Sports on MSN
The Los Angeles Angels of Anaheim are buying, but they would be better off selling or watching. After losing three of four to AL West-leading Texas last weekend, the Angels, despite getting swindled by Arizona in a deal for Haren, went into Tuesday in third place in the AL West, percentage points behind Oakland and 7 1/2 games back of the Rangers. In addition to Haren, they picked up Alberto Callaspo from Kansas City in another too-late-to-really-matter acquisition, and they are still talking on other fronts.

"Swindled in a deal for Haren"? I don't know if Ringolsby is wrong about what the Angels should do from here out, but he definitely missed the call on the Haren deal.

MLB Video - FOX Sports on MSN
Bowden: How far will the Angels go?

This is going to take some getting used to: 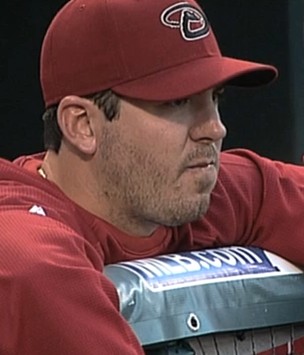 Joe Saunders’s Deceptive Winning Percentage - FanGraphs Baseball
Joe Saunders has a 54-32 career record, good for a .628 winning percentage, good for 16th all time among pitchers with as many innings pitched – 692 – as Saunders. Some pitchers with similar winning percentages? Juan Marichal, Dwight Gooden, Roy Oswalt, Rich Harden, and Justin Verlander – a pretty solid group. If Saunders’s true talent was indeed akin to these pitchers, this trade would not be so widely panned. Saunders, however, simply isn’t that good.

MLB Opening Day 2011 to fall on Friday, April 1; season to end on a Wednesday - USATODAY.com
Major League Baseball, trying to avoid having long underwear as part of its players' postseason apparel, is planning to start the 2011 season in earnest on Friday, April 1 - three days earlier than the traditional Monday opener. It would be the first time a majority of teams start the season on a Friday since 1905, according to the Elias Sports Bureau.

Is it too early to start thinking about 2011?

Which team has the biggest divisional lead in baseball? Oh. 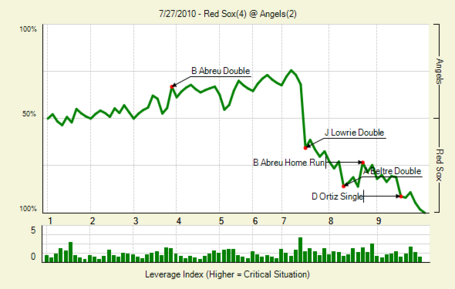 July 28 - BR Bullpen
1890 - Giants' pitcher Mickey Welch beats the Pirates, 4-2, to become baseball's third 300-game winner. The 31-year old Brooklyn native will win only seven more games before ending his 13-year career next season. I'm thinking it wasn't as hard to win 300 games then as it is now.
1964 - The Angels' Jim Fregosi hits for the cycle to assure a 3 - 1 win over the Yankees. New York's only score is a Mickey Mantle homer over the CF fence at Chavez Ravine, one of only two hits off Dean Chance. It's the first homer given up by Chance in 69 innings.
1966 - Rick Reichardt, California's young hitting star, is sidelined with a kidney ailment. He will have a kidney removed in two weeks.
1970 - It's a tough day for Angels C Tom Egan as he is charged with five passed balls, all with different pitchers. To make matters worse, the California backstop also commits an error allowing the winning run to score in a 6 - 5 loss to the Yankees. CERA!
2008 - The Angels, with the top record in baseball, defeat one of baseball's best pitchers, Daisuke Matsuzaka, who entered the game with a record of 11-1, 7 - 5 over Boston. Home runs by Casey Kotchman and Torii Hunter are the big blows. Oh, those were the days.
Happy b-day:
1928 - Harry Dalton, general manager (d. 2005) Angels GM from 1972-1977