Red Sox Beat Los Angeles Angels 7-3 With Help From Marco Scutaro's Grand Slam - Courant.com
When Marco Scutaro saw a changeup coming from one of the hardest-throwing relievers in baseball, Boston's scrappy shortstop knew exactly what to do with that stroke of good luck.  After Rodney issued two walks and gave up a bunt single to open the eighth, Scutaro drove a two-strike changeup into the left field corner, where it stayed just fair. "I was just trying to see the ball and hit a fly ball — something," Scutaro said of the fastballs he had seen earlier in the at-bat. "It's tough when he's throwing 97, 98 [mph], and then he throws a change.  "The Angels were swept at home for the first time in 80 series, ending the majors' longest streak since Atlanta went 84 home series without being swept from 2003-06. "We'll start to patch some things together here," Angels manager Mike Scioscia said after keeping his clubhouse closed for an unusally long time. "Everything is a cause-and-effect, for sure, but we certainly don't feel that we're out of this right now. We've obviously been struggling the last couple of weeks. I think there's options we need to look at, and when there's something that's going to make us better, internally or externally, we'll act on it."

When we look back on the 2010, the point where we will acknowledge the end of this season will be Marco Scutaro's 8th inning grand slam on a Fernando Rodney changeup.  After throwing fastballs of 96, 97, 99, and 98 mph, fastballs that Scutaro never made decent contact on, Rodney threw back-to-back elevated changeups, the second of which Scutaro belted to left field.  I Googled "changeup" and "weak hitter" and this is what I found: "Never throw a change to a batter that can't catch up to your fastball. He will drill it because his low bat speed enables him to accidentally hit this pitch."  Apparently Google is smarter than Fernando Rodney when it comes to pitching.  Here's the video:  Scutaro hits a grand slam to left - Marco Scutaro cranks a grand slam to left field to give the Red Sox a 7-3 lead in the eighth inning.  Another indication that the season is probably over?  This: Pineiro scratched from start against Red Sox - Joel Pineiro is scratched from his start against the Red Sox due to a left oblique strain.

Diamondbacks-Phillies Preview - FOX Sports on MSN
Philadelphia has won a season-best seven in a row and its resurgent offense now looks to spoil Joe Saunders' debut with the Arizona Diamondbacks on Thursday night. Arizona (37-64) acquired the left-hander in the deal that sent ace Dan Haren to the Los Angeles Angels on Sunday. After totaling 33 wins the previous two years, Saunders has been inconsistent this season with a 6-10 record and a 4.62 ERA. "They obviously think highly of me, so it will be a new challenge," he said. Saunders is 0-2 in his last four starts. He lost his final outing in an Angels uniform but pitched well, going seven innings in a 1-0 loss at Texas on Friday. Saunders is 6-3 with a 3.80 ERA in 11 starts versus the NL, including a win two years ago the only time he faced the Phillies.

There will be a Halos Heaven game thread for Saunders' first start as a Diamondback starting at 4 o'clock.  As it's been pointed out in a few comments, after being traded to Arizona and having the uniform number of 51 during his time in Anaheim, Saunders changed his uniform number to 34.  There's been no official reason from anyone as to why Saunders changed his number, but most fans assume it's out of respect for his teammate Nick Adenhart.

Joe Saunders is a good man.

I wonder what his answer would be today?

Cubs' Derrek Lee rejected a trade to the Angels - latimes.com
Chicago Cubs first baseman Derrek Lee used his rights as a player with 10 years' big league experience and five years with the same team to reject a trade to the Angels last week. "It was very tempting," Lee told reporters in Houston after the Cubs' 8-1 loss to the Astros on Wednesday. "I didn't just say no right away. A lot of thought goes into it." According to a major league source, Lee vetoed the trade seven to 10 days ago. The Angels then turned their sights to Kansas City, acquiring Royals third baseman Alberto Callespo for two minor league pitchers on July 22.

RATS! Angels new vermin in home stadium - Jeff Miller - The Orange County Register
Back on the field Wednesday, the patchwork pitch work resulted in coach Mike Butcher making repeated visits to the mound. By repeated we mean Butcher didn’t spend this much time out there when he actually pitched for the Angels. His next-to-last visit came in the eighth inning and couldn’t prevent the complete and crippling meltdown of Fernando Rodney. The reliever turned igniter when he walked the first two batters he faced, permitted a bunt single to a guy – the sacrificing Eric Patterson – who was trying to make an out on purpose and then gave up a grand slam to Marco Scutaro. The disheveling was so thorough that Rodney’s cap was knocked straight, you know, the way grownups dress, as opposed to Rodney’s preferred cockeyed style.

Usually Jeff Miller's article are the worst thing posted on the internet.  This one however, isn't so bad...as far as Jeff Miller articles go.

This is all the Braves fault. 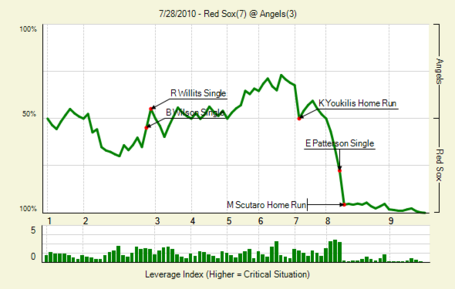