Angels Have Been Outscored After 86 Games

Share All sharing options for: Angels Have Been Outscored After 86 Games

Whether or not Pythagoras knew anything about baseball, there is one indisputable fact about a team's run differential: Good teams do not get outscored. No one gets away with it for an extended period of time. Only 2 of the last 64 playoff teams have finished the season with negative run differentials, both of them winning weak NL West races ('05 Padres and '07 Diamondbacks). The '07 and '09 Mariners both got outscored despite winning 88 and 85 games respectively, and we've seen the sequels. Even though they improved on paper, the '08 Mariners lost 101 games, and this year's edition is on pace to lose another 95 more. No, good teams do not get outscored for extended periods of time.

Yet here we are on the afternoon of July 7, with the Angels having allowed four more runs than they've scored. While the Angels have consistently beaten Pythagoras, the point is academic. Every year the Angels have won the division, they would have still won had they only matched their projected win-loss record. In other words, they've never been a bad team by any definition, or even a mediocre team. After 86 games last year, their run differential stood at +32. But presently, the Angels' run differential has been in the red for 89 of the 93 days in the 2010 season, with a high of +5 and a low of -51. Should we be worried?

The question is rhetorical. Of course we should be worried, we've seen the team on the field. The offense has issues with getting and staying on base, the left-handed starters are sinking the rotation, and the bullpen is mostly awful. But this is a "big picture" analysis, so I'm going to set the aside the details for now. The following chart shows the evolution of the Angels' run differential along with their win-loss record over the course of the season. 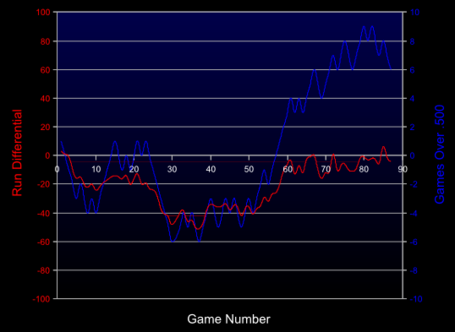 The trends are evident here. The team struggled out of the gate, bombed from games 20 to 30 and bottomed out after game 37. After wallowing for a dozen games or so, the Angels took off between games 50 and 60. The offense and defense seem to have now settled into a slight positive incline in the last 25 games. Still, the team continues to win at a faster than expected rate, although they've tailed off in the last week.

Is this a manifestation of the Angels' sacred mystery? Mike Scioscia's teams usually win more games than they should, and this is slowly gaining acceptance as a legitimate phenomenon as opposed to dismissal as dumb luck. This year he seems to be at it again, extracting three more wins than suggested by the Pythagorean formula. However, I have an idea that might actually explain some of it this time, and it has to do with the structure and management of the bullpen.

Check out what Angels pitchers have done to the opposition in high-leverage situations, i.e. when the game is on the line, versus the rest of the league (you can look over this if you need a primer or refresher on baseball leverage):

However, here's the same comparison for low-leverage situations:

The league average figures are just about the same in both contexts, only with a slightly higher walk rate in high-leverage situations due to intentional walks. This is why many people will say that "clutch pitching" doesn't really exist: the evidence for it disappears in large samples, either across different players in the same season or across the same player in different seasons.

However, the Angels have a huge disparity in their high- and low-leverage performance. In tight spots Angel pitchers have allowed the third lowest OPS among all AL teams. But in situations where the outcome of the game doesn't hang on every play, Angel pitching has allowed the highest OPS of any team in the American League. No other team has such an extreme split.

For completeness, here are the figures comparing the Angels with the rest of the league in medium-leverage situations:

A few more homers, a few less walks, but overall the Angels are fairly consistent with league average when pitching with medium leverage.

So that clinches it, right? Angels pitching is clutch. Well, it's not so simple. Mike Scioscia follows the "role philosophy" of relief pitching probably more rigidly than any other manager in baseball. He has a go-to guy for every situation, and he rarely deviates in his selection. Scioscia has selected Kevin Jepsen, Fernando Rodney, or Brian Fuentes in 60 of the 75 times he has gone to the pen in a high-leverage situation. In the opposite situation, Scioscia has gone to either Scot Shields, Brian Stokes, Francisco Rodriguez, Jason Bulger, or Trevor Bell in 60 of 90 opportunities. Now you might be able to see how the rest of this goes.

Here are some "highlights" of Angel relievers, sorted by the average leverage index while they're in the game:

Don't worry if you don't know what each of the columns mean. The point is that Scioscia has given almost all the important innings to his "good" relievers (I know it strains the imagination to think of Jepsen, Rodney, and Fuentes as "good," but I'm afraid this is the reality of the Angels bullpen). The garbage innings have gone to garbage pitchers, guys who probably wouldn't even be in the league if the Angels had any better options. Bobby Cassevah's numbers are especially fun: the average difference in score when he has entered the game is 6 runs. Roles indeed. 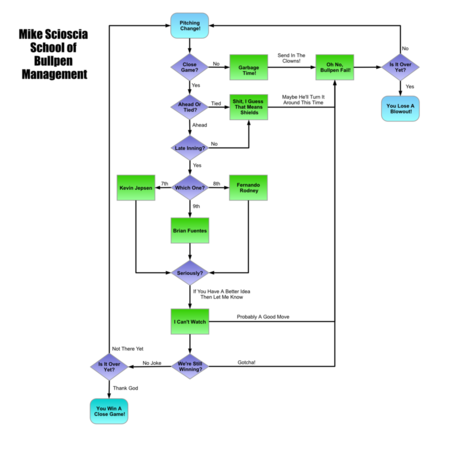 The effect is that the Angels don't win as many blowouts as they lose. They are 13-17 in such situations. A large Angel lead turns into a slim one as the likes of Trevor Bell and Matt Palmer fail to hold it down. Similarly, a small deficit turns into a huge one as Scioscia attempts to use a fire brigade consisting of Scot Shields and K-Rod II to keep it close. However, the Angels can still squeak out the close win, even though they are not nearly as good at it as they used to be. The team record in one-run games is 14-9.

If the Angels had broke even in both blowout and one-run situations as would be expected from a league-average team, they would have won three fewer games. Three games is the current difference between the Angels' expected (Pythagorean) and actual win-loss records. So I don't think the gap is due to clutch pitching, but rather bad pitching by middle- and long-relievers.

In summary, I think the Angels are better than suggested by their run differential. The apparent over-performance is likely a systemic effect resulting from Scioscia's bullpen management. You could look at the .237 average-against in high-leverage at-bats and argue that the Angels are experiencing a random fluctuation of good luck. However, the vast majority of those situations occur when the Angels have their best pitchers on the mound, not only their "best" relievers (try to stifle your laughter), but also their best starters, like Weaver and Santana, as they tend to keep things close. There has been some good luck, such as any game in which Fernando Rodney appears and doesn't give up a run, but also some bad luck, like Jepsen's ludicrous .375 BABIP and Fuentes's unfortunate 14.3% HR/FB rate.

Still, getting outscored this far into the season is unknown territory for any recent Angel team. The 2010 Angels certainly won't repeat last year's 97-win performance with a negative run-differential. It looks like it's trending positively, but will it be enough? The good news is that there are still 76 more games to find out.