Share All sharing options for: Haren's a Winner, Hunter's a Mover.  Halolinks

(I was without internet access Monday and Tuesday. That's the reason for no Halolinks the last two days. It's amazing how used to the internet a person gets, and how strange it is to not have it for an extended length of time.)

Dan Haren gets first win as an Angel - latimes.com
Though Haren said his pitches were "all over the place," he gave up only two singles from the third through sixth innings and got Willie Bloomquist to ground to third with the bases loaded to end the seventh. Second baseman Maicer Izturis helped setup man Fernando Rodney escape a jam in the eighth, making a diving catch of Kila Ka'aihue's liner to end the inning with a runner on second. Closer Brian Fuentes needed only seven pitches to retire the side on three fly-ball outs in the ninth for his 23rd save. The left-hander has yielded only one earned run in 18 innings over his last 18 appearances, an ERA of 0.50.

Last night's game followed the Scioscia gameplan; starter goes 7 innings, Rodney enters the game in the 8th, gets into a jam, Fuentes pitches the ninth. Works greats when the starter is Haren, the defense(!) helps Rodney, Fuentes has his short-arm slingin' working, oh, and the Angels are playing the Royals. How about some video highlights: Haren earns his first win as an Angel - Dan Haren wins his first game with the Angels, hurling seven innings of one-run ball, Bourjos plates Kendrick on a squeeze play - Peter Bourjos plates Howard Kendrick with a suicide squeeze, putting the Angels on top in the fifth inning. What's interesting about this play is home-plate umpire Derryl Cousins was getting ready to ring-up Kendrick, as he thought Kendall had tagged the sliding Howie. That is, until he realized Kendall didn't have the ball. Aybar laces a triple for a run in the fifth - Erick Aybar legs out a triple, scoring Bobby Abreu in the fifth inning. I thought this Aybar's hit was a double, with him advancing to third on the throw home, but who cares. He drove in the run. Kendall catches Bourjos stealing in the fifth - Jason Kendall nabs Peter Bourjos trying to steal second base in the fifth inning. And as the KC play-by-play guy says, "it took a pitch-out and it took a perfect throw" to get Bourjos.

Royals-Angels Preview - FOX Sports on MSN
While Zack Greinke won the AL Cy Young Award last year, Jered Weaver is a candidate to win the honor this year. The ace right-handers will match up for the second time this year Wednesday when the Los Angeles Angels - with Torii Hunter set to return - look to complete a three-game home sweep of the Kansas City Royals. Weaver outdueled Greinke in a 5-4 road victory June 3 by striking out nine in seven scoreless innings to improve to 4-4 with a 2.88 ERA in eight starts against Kansas City (47-66). Greinke gave up four runs in six innings, falling to 1-4 with a 4.38 ERA in six outings against the Angels.

Angels’ first-round gamble may not sign - Sam Miller - The Orange County Register
Cowart was a signability risk all along, as he appeared happy to go to college (Florida State) and, even before the draft, was unwilling to settle for much less than $3 million. He has reportedly rejected the Angels’ offer of $1.5 million.

Sam has a quick update on one of the last remaining Angels draft picks.

Center field won't be the same without Los Angeles Angels' Torii Hunter - Lee Jenkins - SI.com
Hunter is 35 and advanced defensive metrics say he does not cover near the ground he once did -- he ranks 16th out of 21 qualifying center fielders in Ultimate Zone Rating -- but the Angels insist that they were satisfied with Hunter's range. They were not, however, satisfied with the range of left fielder Juan Rivera and right fielder Bobby Abreu. Playing between them, Hunter was wearing himself out bridging both gaps. If the Angels had an elite corner outfielder in the minor leagues, they probably would have called him up, but their system is not as stocked as it used to be. Bourjos was among their best prospects and surely their fastest. According to Hunter, no one ever told him to switch positions. Club officials simply asked him, and after two sleepless nights, he agreed that it would be best for the team. "I don't think I've lost anything," Hunter said. "I still think I can play center field with the best of 'em. But I had my time. This isn't about individual stuff. It's about winning." When Bourjos emerged from his meeting with Scioscia in Baltimore, the first player he saw was Hunter. "I was hesitant," Bourjos said. "I didn't know what to expect. Right away he came up to me and said: 'Anything you need, I'm here to help you.'"

Dodgers Release Garret Anderson - MLBTradeRumors.com
The Dodgers released Garret Anderson, according to the MLB.com transactions page. They designated the veteran outfielder for assignment over the weekend. Anderson, 38, hit .181/.204/.271 in 163 plate appearances this year. He has played 34 games in the outfield and Joe Torre used him regularly as a pinch hitter.

This looks like the end of the line for GA. Should the Angels sign him to a one-day contract so he can retire as a Halo? Would that be too sappy?

Cincinnati Reds acquire OF Jim Edmonds from Milwaukee Brewers - FOX Sports on MSN
Edmonds batted .286 with eight homers and 20 RBIs in 73 games for the Brewers. His stint in Cincinnati could amount to a final go-around - he talked recently about retirement because years of injuries have taken a toll.

Edmonds' 2010 season totally surprised me. He's actually done pretty well, and Cincinnati must think there's still something left in his tank if they went out and acquired him.

Brewers' Rickie Weeks is on pace to become second leadoff hitter with 100 RBI - USATODAY.com
Don't look now, but Brewers' Rickie Weeks is on pace for 102 RBI this season, all coming from the leadoff spot. If he continues that pace, he would become the second player ever to accomplish the feat - Darin Erstad did it in 2000 with the Angels (100 RBI).

Okay, this isn't really about an ex-Angel, but it did remind me of Erstad's accomplishment.

Cardinals, Reds fight after Molina rejects Phillips' bat greeting - Big League Stew - Yahoo! Sports
Yadier Molina took exception to a seemingly friendly little bat tap from Cincinnati Reds leadoff man Brandon Phillips. Molina wanted nothing to do with the greeting, not after what Phillips said about the St. Louis Cardinals the night before. After some jawing, it was on — a bench-clearing fight at Great American Ball Park that featured plenty of pushing and shoving, a little punching and even some mixed-up martial arts kicks by Reds right-hander Johnny Cueto — Cincy's starting pitcher. Not quite UFC-quality, but better than the usual baseball nonsense.

Here's the video if you care: Cards, Reds clear benches

Murphy leads Texas over Yankees, 4-3 in 10 - Yahoo! Sports
Murphy’s single off Rivera with the bases loaded in the 10th inning gave the AL West-leading Rangers a 4-3 victory Tuesday night in an early August matchup of division leaders with a playoff-type atmosphere.

Douchebag Yankees. What the hell??

And speaking of douchebags...

Bo is no beau as girlfriend is hit by foul ball - astros.com: News
The woman, identified only as Sarah, was struck on the right arm by a foul ball off the bat of Chris Johnson in the fourth inning while sitting down the left-field line -- a ball that she didn't see coming because her boyfriend ducked out of the way at the last second. 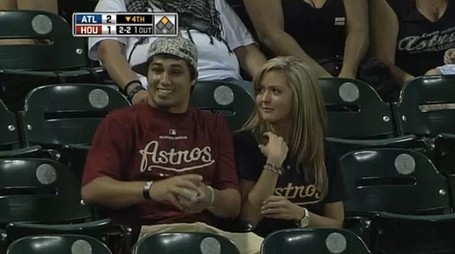 Is this a classic picture, or what? This is a screencap I made from the video and I must say, it's a masterpiece. The looks on their faces tells so much. From the amused, "You think you're getting some tonight?" look on her face, to the "Hee-hee-hee...duh" look on his. If you click on the link there are two things to look for; 1) The guy's stoned right? and, 2) Why does this girl keep calling him "baby"? 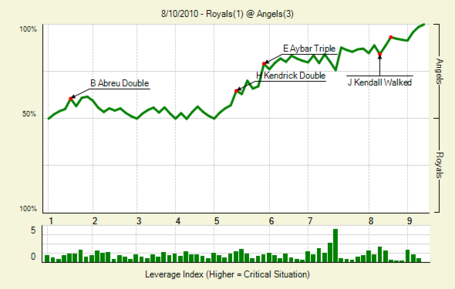 Second-place (and moving up):

1929 - Babe Ruth hits his 500th career home run, this one off the Indians' Willis Hudlin. Second place all-time is currently Cy Williams with 237 homers. Amazing. More than twice as many as the next guy.
1980 - Reggie Jackson hits his 400th career home run off Britt Burns in the Yankees 3 - 1 victory over the White Sox at Yankee Stadium.
1988 - After going 225 at bats‚ Gary Carter finally hits his 300th career home run as the Mets beat the Cubs, 9 - 6.

I'm sure someone hit their 200th (and 100th for that matter) career home run on this date at some point in baseball history.