Abreu hits walk-off HR in 10th to secure Angels' sweep of Royals - CBSSports.com
Bobby Abreu moved into the top spot in the order after the Los Angeles Angels got swept last week at Baltimore. They're been mostly winning ever since. Abreu homered in the bottom of the 10th inning Wednesday to give the Angels a 2-1 victory over the Kansas City Royals and their first three-game sweep since mid-June. "It's not over for us," right fielder Torii Hunter said. "The fat lady, she hasn't sang yet." Abreu sent a 1-1 pitch from Jesse Chavez (4-3) into the right-field seats with one out. The Angels rushed from the dugout to greet Abreu but stood back, giving him plenty of room to safely cross the plate.

Yesterday was a good day; the Angels sweep the Royals with the final win coming on a dramatic, extra-inning walk-off home run, and then the Rangers taking a heartbreaking loss to the Yankees. I've already said the Angels season was over, but I might be wrong. I hope I'm wrong. The Angels need more days like yesterday, and it's quite possible the calendar is full of them. Here are the highlights: Pena throws to second base to nab Matsui - Brayan Pena catches Hideki Matsui trying to steal second base in the fourth inning. It's funny causes he's slow (I just watched "The Hangover" again and was reminded of the line from the movie, "It's funny cause he's fat"). Anyway, Ka'aihue makes a nice play to end the frame - Kila Ka'aihue makes a nice play to retire Alberto Callaspo, ending the eighth inning. Yeah, he made a nice play on a FOUL BALL. The first base umpire is a rah-tard. Weaver retires Gordon to end the threat - Jered Weaver retires Alex Gordon to get out of a bases-loaded jam in the eighth inning. Weaver should have slapped Gordon in the face with his glove and shouted "Sit down, bitch!" Okay, maybe not, but that would have been so boss. Weaver fans 11 over eight frames - Jered Weaver gives up only one run and strikes out 11 over eight dominant innings. Watch these strike outs and notice how well Weaver mixed his pitches and how kick-ass his off-speed stuff was. Abreu crushes a walk-off homer to right field - Bobby Abreu wins it for the Angels with a solo homer in the 10th inning. Ah Bobby. Bobby-bobby-bobby-bobby.

Angels 'fairly close' to an agreement with draft pick Kaleb Cowart - latimes.com
The Angels have offered Cowart at least $1.5 million, a bonus commensurate with his draft slot, but Bane said, "We know it's going to cost us more than his slot figure."

Police: New York Mets' Francisco Rodriguez charged with assault on father-in-law - ESPN New York
Police say New York Mets reliever Francisco Rodriguez was charged with third-degree assault, a misdemeanor, after an altercation with his father-in-law at Citi Field. Rodriguez became highly agitated with reporters who approached him at his locker after the altercation. Rodriguez screamed, "Mind your own [expletive] business!" to a reporter who tried to ask him a question.

Anyone miss this goofball?

65-48 - Lone Star Ball
I'd wager if the Rangers have a 6-2 lead in the 7th inning with Cliff Lee on the mound, regardless of the opponent, they win the game 95% of the time. This was one of those 5%. And it sucked. That was the toughest loss in some time. I'm spent.

Followed by 1180+ comments consisting of wailing and gnashing of teeth. Could this be the turning point of the Rangers' season? You know, the type of kick to the balls that takes the wind completely out of your sails and gets you thinking maybe you're not as good as you thought. Here's how it happened: Jeter's single ties the game in the ninth - Derek Jeter rips a single to center, that deflects off Cristian Guzman's glove, to plate Curtis Granderson to tie the game at 6. "...rips a single to center"? Jeter hit a weak chopper up the middle that managed to avoid 17 Ranger defenders to drive in the run. Okay, maybe not 17, but surely not a hit I'd classify as a "rip". Thames' single gives the Yankees the lead - Marcus Thames rips a single through the left side to score Brett Gardner, giving the Yankees a 7-6 lead in the ninth, and finally Rivera gets Guerrero for the final out - Mariano Rivera gets Vlad Guerrero to hit a grounder to A-Rod for the final out as the Yankees come back to win 7-6. And the Rangers are left holding their balls wondering what happened.

Small payroll teams turning the tables on baseball's big boys - USATODAY.com
"Maybe some of our collective concerns appear to be unfounded, at least for now," says Milwaukee Brewers owner Mark Attanasio, who has called for a salary cap. Certainly, the playoff landscape has baseball thumping its chest, believing it helps dispel the theory that teams can buy championships. "We have more competitive balance than we've ever had," Commissioner Bud Selig said. "This is a manifestation of all the economic changes we've made. It's working very well." A year ago, the Minnesota Twins, with an opening-day payroll of $65 million, were the only team to rank in the bottom third of payrolls and reach the postseason.

Justice: Berkman is in an Empire State of confusion - Houston Chronicle
Two days before the July 31 trading deadline, Wade told him there were eight teams interested in trading for him, and he needed to know which ones he'd consider going to. Wade went down the list. Berkman said yes to the Yankees, Padres, Rays and Rangers, and no to the Giants, Angels, White Sox and Tigers. Berkman hung up the phone and looked at his dad, Larry. "I think I'm getting traded," he said. 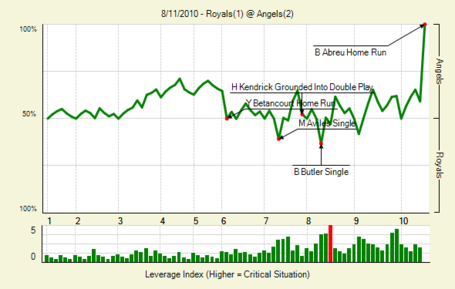 August 12 - BR Bullpen
Events, births and deaths that occurred on August 12.
1912 - Three men attack Ty Cobb on his way to the Detroit rail station. Cobb sustains a cut on his shoulder, but catches one of his attackers and pistol-whips him. Cobb then travels to Syracuse and gets two hits in an exhibition game. Because he was a badass cracker-hillbilly MF. (okay, maybe not a hillbilly, but you catch my drift)
1963 - Stan Musial announces his retirement, effective at the end of the season, at the St. Louis Cardinals' annual team picnic. You was pissed off that he finished third in the three-legged race, missed out on the potato salad, and someone burned his wiener.
1974 - Nolan Ryan fans 19 batters in the California Angels' 4 - 2 win over the Boston Red Sox. Ryan breaks the American League record of 18 strikeouts set by Bob Feller in 1938 and ties the ML record set by Steve Carlton in 1969 and Tom Seaver in 1970. He also ties the ML record with 32 Ks in his last two games.
1994 - Major League Baseball players go on strike. For the first time in 90 years, the World Series will not be held. Matt Williams' assault on the home run record held by Roger Maris is halted. What a bunch of dicks.
Happy b-day:
1880 - Christy Mathewson, pitcher, manager; Hall of Famer (d. 1925)

How sweep it is: