Recap: Red Sox 7, Angels 5 - BostonHerald.com
TURNING POINT - It all began with Victor Martinez’ infield single, but Mike Lowell’s ability to draw a one-out walk was equally essential to the Red Sox’ winning rally in the seventh inning. Lowell’s walk loaded the bases and put additional pressure on Angels reliever Kevin Jepsen to throw strikes. He was unable to do so. Jepsen’s wild pitch allowed Martinez to score the tying run, and after intentionally walking pinch-hitter J.D. Drew to reload the bases, Jepsen hit pinch-hitting Daniel Nava to force home the go-ahead run.

Jepsen had done nothing up to the point where he threw a pitch about 6 feet in front of home plate allowing the tying run to score, so why was he still in the game to face Nava? One of the shortcomings of the Halo bullpen is the lack of a lefty specialist, which is probably the reason Jepsen was still in the game to bounce a pitch to left-hander Drew. So, where was Rodney? The same place he always is during innings one through seven, sitting on his ass in the pen. I realize it might be sacrilegious to question Scioscia's set-in-stone relief pitcher usage chart, but seriously, what's the point of saving Rodney to protect the lead in the 8th inning if the game gets lost in the seventh? Highlights - Good: Napoli blasts his 20th homer of the season - Mike Napoli launches a solo shot over the Green Monster to tie the game at 1 in the third, Callaspo jacks a three-run shot in the fifth - Alberto Callaspo belts a three-run homer just over the right-field wall to give the Angels a 5-2 lead in the fifth, and the Bad: Oritz scores after Nava is hit by a pitch - Daniel Nava is a hit by a pitch, which allows David Ortiz to score to give the Red Sox a 6-5 lead in the seventh, Nava makes a great grab to end the eighth - Daniel Nava races in to take a hit and an RBI away from Maicer Izturis with a great diving grab to end the eighth.

Angels-Red Sox Preview - FOX Sports on MSN
The Angels, meanwhile, will now try to avoid their fifth losing streak this season of at least four games. Two of the previous four skids concluded with sweeps at the hands of Boston. "Anytime when a team's struggling, less is more,'' said Los Angeles manager Mike Scioscia, who had his team skip batting practice Wednesday. "If anything, our guys are working too hard.'' Scioscia will give the ball to Ervin Santana (12-8, 3.99 ERA) in an attempt to cool off the Boston bats. The right-hander pitched well at Fenway on May 4, limiting the Red Sox to one run over seven innings, but wound up without a decision in a 5-1 loss. He is 1-2 with a 4.61 ERA in seven starts versus Boston. The Red Sox will counter with Josh Beckett (3-2, 6.51), who will make another attempt to reverse course in his disappointing season. The right-hander appeared to be doing just that in his first three starts following a two-month DL stint due to a back strain, going 2-0 with a 2.18 ERA, but has gotten pounded for 13 runs and 21 hits over 9 2-3 innings while losing his last two outings.

Peter Bourjos' offense is a work in progress - latimes.com
Bourjos hit .122 in his first 12 big league games, with five hits, 10 strikeouts and three walks in 41 at-bats, and he was on the bench for Wednesday night's game against the Boston Red Sox. The big concern is that Bourjos struggles for an extended period, loses confidence and starts drawing comparisons to Brandon Wood, who failed to emerge from a three-month slump and lost his third base job in July.

Tigers lose game, Jim Leyland loses mind - Bless You Boys
Miguel Cabrera, who hit his 29th and 30th home runs earlier in the game, was nailed high in the ribs with a fastball from Yankees' reliever Chad Gaudin. You'd expect Cooper to come out from behind the plate, and toss Gaudin. After all, warnings were issued. Standard procedure, right? Wrong. There was no ejection. Gaudin remained in the game. Yankees manager Joe Girardi wasn't ejected. Cabrera looked stunned that there was no ejection, then took his base. Absolutely nothing happened at all...save for Jim Leyland losing his mind. When it was obvious there would be no repercussions for hitting the Tigers' meal ticket, Leyland ran onto the field to give Cooper a long piece of his mind. After somehow not getting tossed, Leyland's berating of Cooper continued from the bench. The commentary from Leyland was a string of F-bombs interspersed with his saying someone was going to get hurt, and this prime nugget.caught by Fox Sports Detroit's microphones... "They're going to the ******* playoffs, I ain't going anywhere."

There's really not much being written about last night's Yankee/Tiger game. As you can read above, both teams were warned after Gardner was hit, but there were no ejections later in the game after Cabrera was hit and Jeter was thrown at. What happened? Here's the video from the game: No pitchers ejected after benches are warned - The only ejection after benches are warned in the first is Jim Leyland, who protests the non-ejection of Chad Gaudin

MLBPA challenges Mets' actions in K-Rod case - CBSSports.com
The Major League Baseball Players Association is challenging the Mets' decision to place the record-setting closer on the disqualified list and their effort to convert his contract to a non-guaranteed deal. If the case isn't settled, arbitrator Shyam Das would decide whether the team's actions were justified. No hearing date has been set. "We disagree with the position of the Players Association," the Mets said in a statement. "We believe our action was justified and appropriate." By going on the disqualified list, Rodriguez will lose $3,016,393 of his $11.5 million salary this year. Added to the $125,683 he lost when the Mets put him on the restricted list for two days last week, the altercation already has cost him $3,142,076.

Derrek Lee's move to Atlanta the right one - ESPN
The first proposed trade that the Cubs brought to Derrek Lee was to the Angels, and by the time Lee mulled that over in the third week of July, the Angels -- in spite of their extraordinary history -- were buried deep in the AL West standings. For Lee, at age 34, it was not the kind of sure thing he needed to justify uprooting his family and moving in the middle of the season.

From the last two weeks of July, the Angels were anywhere from 3 to 7 games out of first. I'm not too sure that's "buried deep", and with the right acquisition, not an impossible gap to close. Lee must have felt he wasn't good enough to help a team get to the play-offs, but just good enough to keep a first place team out of second. Thanks for doing the Angels a favor.

Unidentified man injured in fall at Fenway Park on Wednesday night - ESPN Boston
It was at that point, the former policeman said, that he first observed the victim. "His chest was heaving, so he was breathing, but he definitely had a good deal of blood on his forehead. "I saw him lying face up. He'd lost a shoe. Security kept his shoe."

Cincinnati Reds vs. Arizona Diamondbacks - August 18, 2010 - ESPN
Jim Edmonds showed some hustle scoring from third base on pinch-hitter Chris Heisey's perfectly executed bunt that scored the go-ahead run as the Cincinnati Reds rallied from a four-run deficit to beat the Arizona Diamondbacks 11-7 on Wednesday night. Heisey plates the go-ahead run on a bunt hit - Video

I like keeping up with former Angels, especially when they're doing well. Oh, and he also homered: Edmonds lifts a solo home run to left - Video

This has got to be one of the worst things I've ever seen...

Now we know where Roger Lodge was. "Game on!" Did they really steal a line from "Wayne's World"? 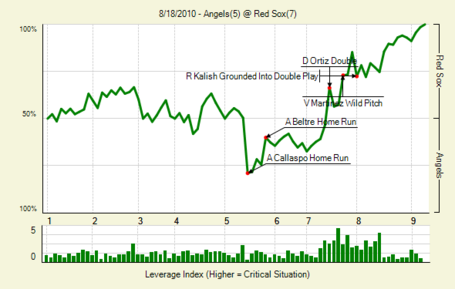 Texas vs. Tampa Bay - Recap - August 18, 2010
This was one nice series for Evan Longoria and the Tampa Bay Rays . Longoria hit a solo homer and drove in four runs to help the Rays beat the Texas Rangers 8-6 on Wednesday, completing a sweep of the three-game set between potential playoff opponents.