Kazmir to pitch simulated game - The Orange County Register
Out since the All-Star break with shoulder fatigue, left-hander Scott Kazmir will throw a four-inning simulated game (approximately 60 pitches) at the Angels’ minor-league complex in Tempe, Ariz. on Monday. If all goes well enough, Kazmir would then rejoin the team in Baltimore and rejoin the starting rotation on Saturday in Detroit. Kazmir has not pitched since a club-record 13-run beatdown in Oakland on July 10.

Just in case you were wondering.

Angels make their pitch to stay in AL West race with 4-1 win over Rangers - latimes.com
The Angels played one of their best overall games in weeks on Sunday, despite third baseman Alberto Callaspo's sixth-inning error that led to the Rangers' only run and Juan Rivera's ill-advised seventh-inning attempt to stretch a bloop single to right into a double; Rivera, perhaps trying to silence critics who have questioned his effort in recent weeks, was thrown out at second. Fernando Rodney retired the side in order in the eighth, shortstop Erick Aybar ranging far behind the second-base bag to field Guerrero's grounder and throw to first for the out, and closer Brian Fuentes threw a scoreless ninth for his 20th save.

Weaver strikes out seven, earns the win - Jered Weaver strikes out seven over seven innings of work, and earns the win (how soon until there's some Weaver/CY Young talk?), Murphy throws out Napoli at home - David Murphy throws out Mike Napoli at the plate to end the bottom of the first inning (anyone think Napoli would have been safe if he had slid?), Callaspo makes a tough throw to get the out - Alberto Callaspo makes a strong throw to get Taylor Teagarden out at first in the the top of the third (Napoli makes a nice play at first handling Callaspo's throw), Aybar goes to his left to get the out - Erick Aybar shows off his range, going to his left to get the out at first in the bottom of the eighth.

Boston Red Sox - Going rate too steep for GM - The Boston Globe
And while Epstein said the Sox were "pretty aggressive’’ in their offers, the deals were not to their liking.They made strong offers on Toronto’s Scott Downs, Anaheim’s Brian Fuentes, Seattle’s Brandon League, and were also in on Toronto’s Kevin Gregg, according to a baseball source.

Say what? The Red Sox made an offer for Fuentes and were turned down??

Cuban's role in Rangers auction not clear - Dallas Morning News
When the Rangers finally move to auction next week, as ordered Friday by U.S. Bankruptcy Judge D. Michael Lynn, it appears Mavericks owner Mark Cuban will leave with something one way or another. It's just not certain whether it will be controlling interest in the club or a hefty profit. Two sources said Friday that Cuban has been buying and trading for debt notes on the Rangers and Hicks Sports Group, which would make him both a bidder and a creditor. Lynn ruled the auction for the Rangers will go forward Wednesday as scheduled, and it could include a new bidder – Rupert Murdoch's News Corp, according to a source who spoke on the condition of anonymity.

What's interesting here is the emergence of News Corp as a potential bidder. News Corp is the previous owner of the Dodgers.

Garret Anderson’s Gotta Go - FanGraphs Baseball
Brandon Wood has "bested" Anderson. He’s got the 13th-worst OPS+ among players with 160+ PA since Theodore Roosevelt took over as U.S. president following William McKinley’s assassination. Anderson places in a tie for 141st. So, he’s got that going for him. 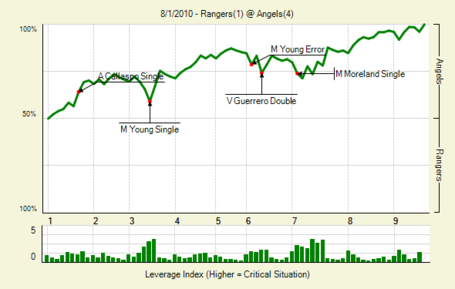 August 2 - BR Bullpen
1921 - With the jurors lifting the men onto their shoulders, the eight White Sox players accused of throwing the 1919 World Series are acquitted by the jury. The next day, Commissioner Kenesaw Landis will say the overwhelming evidence clearly shows the Black Sox fixed the games with gamblers and all involved will be banned from playing professional baseball again.
1979 - Yankees C Thurman Munson, 32, perishes at Canton, Ohio, in a crash of the plane he was piloting. A crowd of 51,151 will attend the memorial tribute at Yankee Stadium tomorrow.
1985 - The last-place Pirates unload three of their veteran players, trading pitchers John Candelaria and Al Holland and OF George Hendrick to the Angels for OF Mike Brown and pitchers Pat Clements and Bob Kipper.
1995 - Long-time coach Jimmie Reese, whose 23 years in an Angels uniform equals the longest in club history is inducted into the Angels' Hall of Fame. The former roommate of Babe Ruth began his career as a batboy for the Pacific Coast League's Los Angeles Angels in 1917.
R.I.P.:
1979 - Thurman Munson, catcher; All-Star (b. 1947)

About 9 more of these: