Matsui's homer helps hang loss on Red Sox - angelsbaseball.com
Jepsen dispatched Boston's 4-5-6 hitters, putting his premium fastball and offspeed stuff in the right locations after letting them wander in Wednesday night's distressing loss. "It's always nice to come back the next day, get back on the horse, and go out and pitch well," Jepsen said. "I'd like to have saved all of Ervin's runs, but it felt good to get those outs."

It was interesting to see Scioscia bring Jepsen into the game after last night's fiasco, but it was a relatively safe situation since the Angels had a 6-run lead. As Jepsen said, "get back on the horse, and go out and pitch well" probably goes a long way in rebuilding a player's confidence. A nice move by the Angels' skipper. How about a couple highlights: Kendrick adds to lead with an RBI single - Howard Kendrick singles softly to short, plating Maicer Izturis to increase the Angels' lead to 7-1 in the top of the seventh. I like this play better than Matsui's home run. It showed a lot of hustle from Kendrick getting down the line to beat the throw. Was this a result of the players only meeting? Callaspo ties the game with an RBI double - Alberto Callaspo grounds a double to left field, plating Maicer Izturis to knot the game at 1 in the top of the sixth, Matsui's blast puts the Halos on top - Hideki Matsui belts a three-run home run to put the Angels on top, 4-1, in the sixth inning.

Angels-Twins Preview - FOX Sports on MSN
Although Haren (1-3, 3.44 ERA) hasn't pitched poorly with his new team, the Angels have lost four of his five starts. They remain seven games behind Texas despite gaining ground with Thursday's 7-2 win over Boston. With struggling starter Nick Blackburn in the minors, Brian Duensing (6-1, 2.00) has provided a major lift for the Twins' rotation, going 3-0 with a 2.43 ERA in five starts after making his first 39 appearances of 2010 in relief. Duensing has a 1.42 ERA at home this year, one reason the Twins are 38-21 at their new ballpark. Haren, meanwhile, hasn't won on the road since May 6 at Houston, going 0-4 with a 6.39 ERA in his last seven starts away from home. He didn't factor in the decision in his road debut with the Angels, giving up four runs and 10 hits in 6 1-3 innings of a 5-4 loss at Baltimore on Aug. 5. The right-hander allowed four runs and nine hits in seven innings of Sunday's 4-1 home loss to Toronto. "I've thrown the ball OK, but I don't think I've shown my capabilities," Haren said. "I expect more out of myself."

Team meetings yield quick results - CBSSports.com
Team meetings are kind of a delicate thing. Go to the well too often, and people stop listening. Call one at the wrong time, and you end up with a divisive argument. But I've always been surprised at how often a well-intentioned team meeting produces short-term results (emphasis on "short-term"). Can professionals really be prompted to play baseball better with a pep talk or a lecture? There's really no way to quantify it statistically, but based on anecdotal observation, I think it happens. Refocus, clear the air, get back to business. Two teams landed in the win column Thursday after closed-door meetings. The Angels apparently had a humdinger, led by Torii Hunter. "I can't tell you everything because it's a secret," Hunter told reporters. "But it was uplifting. We got into it, too. But we figured some things out. The way we were playing, we were down every night. The last five games we were dead, no energy. Guys would strike out and just go sit on the bench. It was sad. I thought it was time to call a meeting. "It was actually pretty intense. ... Give us your all. Play like it's your last game."

Do meeting really inspire players to perform better? If so, why?

Feds charge Roger Clemens with perjury in steroid case - FOX Sports on MSN
Roger Clemens was vehement: ''Let me be clear. I have never taken steroids or HGH,'' he told a House committee in 2008. Now, instead of the Hall of Fame, baseball's seven-time Cy Young winner could go to prison after being indicted by a federal grand jury Thursday for allegedly lying to Congress.The six-count indictment alleges that Clemens obstructed a congressional inquiry with 15 different statements made under oath, including denials that he had ever used steroids or human growth hormone.

I don't know why the description states the fan flashed the leather when this was a barehanded catch, but this could be one of the all-time best foul ball snags. 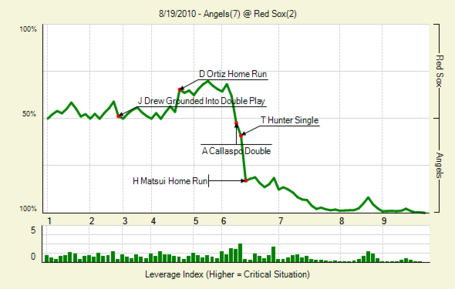 Back to .500, and within striking distance (kinda):

I'm not sure how they figure the A's have a better chance (actually three times better chance) than the Angels to make the playoffs, but here's what the computer has to say. I think it's the same computer that pre-season prediction that the Mariners would win the division.

August 20 - BR Bullpen
Events, births and deaths that occurred on August 20.
1938 - At Union Terminal Tower, Frankie Pytlak and Hank Helf, catchers for the Indians, establish record for catching baseballs dropped from a high altitude. The balls fall an estimated 708 feet and travel an average speed of 140 mph during their 52-floor descent from Cleveland's enduring landmark, the second-tallest building in the world. For some reason, I think this is a really cool stunt.
1972 - The Angels score nine runs in the 4th inning but Detroit counters with eight runs in the 6th to win the wild affair, 11 - 9. Aurelio Rodriguez touches off the comeback with a double and ends the scoring with another extra base hit, a 3-run homer. In between are six singles and a sac fly.
1974 - Nolan Ryan of the California Angels whiffs 19 Tigers in a 1 - 0, 11-inning loss to the Tigers. It is the third time the 'Ryan Express' has struck out 19 batters in one game this season. Ryan throws a ball clocked at 100.9 miles per hour, making it the fastest pitch ever thrown in major league baseball. I was at this game!
1986 - Tigers Walt Terrell is one out away from a no-hitter when Wally Joyner doubles. Terrell settles for a one-hit 3 - 0 win over the Angels. Wally World adds another feat. That was a fun season. At least until the end.
Happy b-day:
1957 - De Wayne Buice, pitcher
1960 - Tom Brunansky, outfielder; All-Star In 1982, traded to the Twins for Doug Corbett and Rob Wilfong
1960 - Mark Langston, pitcher; All-Star