Angels' rally falls short in 4-3 loss to Rays - latimes.com
Their 102nd different lineup of the season, one that included Juan Rivera at first base, couldn't generate enough offense in a 4-3 loss to Tampa Bay on Monday night at Angel Stadium after starter Scott Kazmir dropped the Angels in an early four-run hole."There's not a lot of tweaking we can do to the lineup when so many guys aren't swinging it," Manager Mike Scioscia said. "Certainly, if you look at the options we have to play guys, I don't think there's an impact thing that's going to happen that would make a difference right now."

Anyone know what Scioscia is talking about here? Is he talking about playing guys like Juan Rivera out of position and since the club is so far out of first, it doesn't matter? Or there's nothing that can be done to make the team hit better? There's no one in the organization who can help the team? What does this mean?? How about a couple defensive highlights until I can figure this out: Bourjos robs Upton of a homer in the sixth - Peter Bourjos makes a leaping catch at the center-field wall to rob B.J. Upton of a home run in the top of the sixth inning, Abreu slides to rob Zobrist of a base hit - Bobby Abreu keeps Ben Zobrist off the bases with a great sliding grab in the top of the third inning, Rivera snares a hot shot at first base - Juan Rivera makes a nice snare on Carlos Pena's scorcher in the top of the first inning (why did he run over and step on the bag after catching the line out? Just in case?), Matsui blasts a two-run double to center - Hideki Matsui cuts the Angels' deficit in half with a two-run double off the center-field wall, making it a 4-2 game in the third, and now every pitch Soriano threw last night is documented here...all nine of them. Soriano strikes out the side on nine pitches - Soriano strikes out the side on nine pitches to end the game

Rays-Angels Preview - FOX Sports on MSN
Santana has posted a 1.21 ERA in winning all three of his home starts against the Rays. He tossed a three-hitter in a 6-0 home victory in his last outing versus Tampa Bay on Aug. 11, 2009. Santana has been outstanding of late, posting a 2.66 ERA in winning his last three starts. He allowed two runs over seven innings of a 7-2 win at Boston on Thursday. Making his debut against Los Angeles, Tampa Bay's Wade Davis (9-9, 4.45) will come off the disabled list for his first start since Aug. 5. The right-hander, who has not lost since June 27, was 4-0 with a 3.41 ERA in five outings prior to suffering a strained shoulder. Davis did not experience any discomfort after throwing 43 pitches during a simulated game Friday.

What do the teams (Pirates, Rays, Marlins, Angels, and now Mariners) who had their financial documents released have in common? Why these teams?

Make-or-break time: Vital week for teams in MLB playoff hunt - USATODAY.com
Even the most lopsided division — the American League West — could have intrigue by week's end. That's when the Oakland Athletics, eight games behind and tied with the Los Angeles Angels for second place (not any more. The A's are a half-game ahead of the Halos), complete a three-game series at the first-place Texas Rangers.

If the Angels can't catch the Rangers, I hope Oakland does.

Umpires should explain botched call - Philadelphia Daily News
The situation: With no outs and a runner on first base, Astros centerfielder Michael Bourn directed a sacrifice bunt down the first-base line. Ryan Howard fielded the ball and appeared to tag out Bourn. Gibson called Bourn safe. Even if Howard missed the tag, Bourn clearly took a step out of the base line to avoid the tag and then took two more strides before curling back into first base. Gibson's call indicated that not only did Howard miss the tag but Bourn's run was legal.

Today's umpire controversy. I don't know how the umpire missed this one, a play so obvious. Must C Controversial: Was Bourn safe or out? - Michael Bourn makes it to first base safely on a controversial call 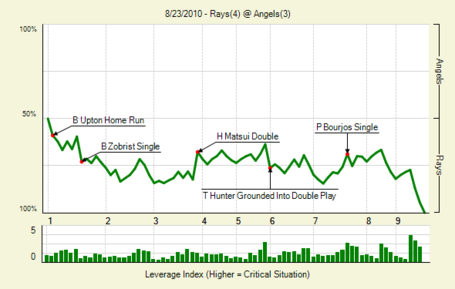