Share All sharing options for: No Time for Timely Hits, Scioscia's Insane.  Halolinks

Angels' offense can't match up with Rays in 10-3 loss - latimes.com
The Angels' hitting coach and his disciples have taken instructional sessions out of the batting cage and onto the field. They have visualized hitting singles to take away the temptation to overswing. Some days, they will talk about anything but baseball. None of it has revived a slumbering offense that continued to snooze Tuesday night at Angel Stadium during a 10-3 loss to the Tampa Bay Rays. The beatdowns go on for an Angels offense that stranded 12 runners and went one for 14 with runners in scoring position, lowering the team's average to .144 (17 for 118) in that situation over its last 15 games.

Yeah, yeah, yeah...the Angels can't hit with guys on base. And apparently Erick Aybar can't count to "3". A little later on in this edition of Halolinks, I mention the movie "Major League". If you've seen the poor sequel ("Major League 2"), you might remember the Randy Quaid character. That's how I'm starting to feel. Anyway, here's some 'lights: Kendrick hammers a solo shot in the seventh - Howard Kendrick pulls the Angels closer with a long ball to right-center field in the seventh inning, The Angels' defense misplays a sac fly - Erick Aybar forgets the number of outs after making a catch on a sac fly and John Jaso moves up with no one covering third, Madddon is ejected arguing a play at second - Joe Maddon is ejected for arguing when Evan Longoria is called out at second on an attempted steal. Two things about this play, if you watch closely you'll see Longoria does a slight toe-tap while Aybar is still applying the tag. The other I've mentioned before, but I like when managers show some emotion and argue. Not the crazy crap, but good, emotional arguing.

Rays-Angels Preview - FOX Sports on MSN
Earlier this season, the Tampa Bay Rays won a series in Anaheim for the first time in 11 years. On Wednesday, they will try for their first road sweep of the Los Angeles Angels when Jeff Niemann - who has never lost to an AL West opponent - becomes the second straight Rays starter to be activated off the disabled list. Tampa Bay (78-48) endured a decade of futility in Anaheim, losing 34 of 42 games from 2000-09. Niemann, though, hasn't pitched that well against the Angels, going 1-0 with a 5.51 ERA in three starts. Los Angeles starter Dan Haren (1-4, 4.39) will face Tampa Bay for the first time since 2007. He's 4-2 with a 2.74 ERA in seven starts against the Rays. The former Arizona right-hander turned in the worst of his six starts since joining the Angels on Friday, allowing seven runs over seven innings of a 7-2 loss at Minnesota.

Angels may have found first baseman in Juan Rivera - Los Angeles Angels Blog - ESPN Los Angeles
Mike Napoli, who had been playing some first base, was inactive Monday and Scioscia said he preferred Rivera starting at first over Napoli because Rivera is more productive at the plate. Then again, that’s not saying much considering Rivera has only four hits in his last 24 at-bats. "Nap wants to play and he has a terrific chance to play this year but obviously we’re looking for production and Juan has been a little more consistent at the plate recently and that’s what we’re looking at," Scioscia said. "Juan’s been starting to drive the ball a little bit better. Mike’s struggled with guys in scoring position and he’s struggled with his walks (although he has drawn more walks than Rivera). On the offensive side he’s driving the ball well, but Juan is a little more complete hitter right now." Scioscia, however, stopped short of saying Rivera was now the everyday starter at first base and Napoli would be relegated to the bench for the rest of the season.

I have two theories if this story is true; either the team's poor play this season has driven Mike Scioscia insane, or Scioscia is under orders from the front office not to play Mike Napoli. Napoli is eligible for salary arbitration after the season, are the Angels are limiting his play, weakening his arbitration case? Scioscia says Rivera has been more consistent at the plate lately. Here are Rivera's and Napoli's slash-stats over the last 14 days:

The only category Rivera is doing better is batting average, but Napoli is getting on base more (so far this season) and hitting the ball harder than Rivera. Although Napoli does strike out a lot, he's still doing better than Rivera at the plate. Another factor is defense, Rivera has only played two games at first base, but Napoli has played surprisingly well at that position since filling in for Morales while Rivera's defense can be classified as "suspect". So the question has to be asked, what's the upgrade with Rivera?

Markazi: Los Angeles Angels' Torii Hunter doesn't have the cure - ESPN Los Angeles
It's not that the Angels haven't been getting hits or runners on base (they had 10 hits to Tampa Bay's 13); they just haven't been getting those runners home. On Monday, the Angels went 1-for-11 with runners in scoring position and on Tuesday they were actually worse, going 1-for-14. They're hitting .193 (33-for-171) with runners in scoring position in August.

Another interesting stat from this article: The Angels, who are 15-21 since the All-Star break, are three games under .500 for the first time since May 29, when Morales was lost for the season.

Bourjos’ defensive numbers are real - Sam Miller - The Orange County Register
Thankfully, Angels fan Sean Smith (HH author RallyMonkey5) — who invented the well-regarded Total Zone metric — answers this question today: "Through 17 games, Peter Bourjos has a TotalZone rating of +11, which breaks down as +4 for his outfield assists, and +7 for his range. That kind of rate cannot be maintained. But has he saved 11 runs so far? You look at the plays, count them up, and it seems about right so far. Last night he saved 3 with a catch that turned a 3 run homer into the third out of the inning.

(update: Okay I'm an idiot. That's not the update though, the update is the above link is a post about a Halos Heaven post. Basically, I linked to post that links back here. Yeah, I'm not too bright. Here's the original post: LINK)

Fuentes, Napoli, Rivera on waivers - The Orange County Register
Ken Rosenthal reports that the Angels have finally put their veterans on waivers, essentially conceding that, nine games out of first, they might gain more by selling than by holding. Says Rosenthal: "Angels finally place trade candidates on waivers: Fuentes, J. Rivera, Napoli, others. Abreu included, but he is signed through ‘11."

What took so long? Did the Angels front office think there was still a chance at catching the Rangers? Actually, there still is a chance, but not putting any players on waivers until now limited the Angels ability to make a deal if one presented itself earlier this month.

Pair of Angels on track for rare accomplishment - HardballTalk
There's still a ways yet to go, but both Brandon Wood and Jeff Mathis have opportunities to become the first players since 2003 to finish a season with 200 plate appearances and a strikeout-to-walk ratio of at least 12:1.

And now for the financial news:

INFOGRAPHIC: Leaked Financial Documents Reveal Angels' Profits - Neon Tommy
I received this tip via email sending me to the above site. There's some pretty interesting charts and graphs regarding the leaked Angels financial reports.

Insurance carrier may be at center of revenue sharing leaks involving Pirates, Rays and others - New York Daily News
An insurance carrier associated with several baseball teams may be responsible for the leak of sensitive financial documents that have exposed flaws in the league's revenue-sharing program, according to two Major League Baseball sources.The league's Department of Investigations, formed in 2008 at the recommendation of former Senator George Mitchell, has zeroed in on the insurance carrier after Deadspin.com and the Associated Press published a series of confidential financial reports detailing revenue streams and expenditures for several teams.

Marlins' profits came at taxpayer expense - Yahoo! Sports
Most harrowing is the takeaway that baseball’s biggest welfare case could have funded a much greater portion of the ballpark. In 2009, when the Marlins started spending some of their profits on their portion of the stadium, they still had an operating income of $11.1 million. The team fought to conceal the $48.9 million in profits over the last two years because the revelation would have prompted county commissioners to insist the team provide more funding.

Here's the first story I've read about the fallout from the leaked financial reports. You had to know someone, somewhere would use this information to show how evil MLB owners are. Are they evil? Probably not. I'd say "Greedy". At least a little. 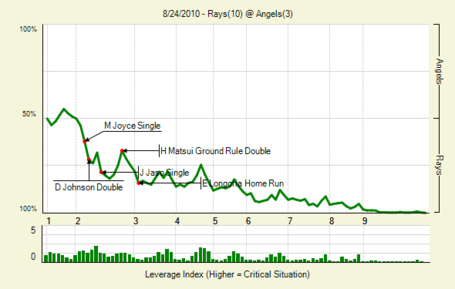 Ivan Bezdomny's Baseball Blog: Incomplete thoughts on ground-ball pitchers
But Bill James brings up a better point. Who are the great two-seam fastball ground ball pitchers out there? Clearly Brandon Webb has to be the most famous example. But let's consider the others. I only had reliable two-seamed fastball data for 2009, so all examples have to be from last year. Ignoring Scott Kazmir, who no longer throws two-seam fastballs, and the hobbled CM Wang, is there anything we can generalize about the two-seam fastball pitchers?

Wait a minute. Scott Kazmir stopped throwing his 2-seam fastball this season? And why is that? Could this be why he sucks?

Los Angeles Angels - Yahoo! Sports
"We've been off and on this year. We were the Angels for a couple weeks here and there. Then I don't know who we were, the Bad News Bears or something." —Angels OF Torii Hunter.

Last night the Versus network was showing their version of the movie "Major League". I say their version because it was edited beyond belief. I understand the editing for language on "regular" television, but this version completely cutout the Rene Russo portion of the movie. You know, the parts where Tom Berenger uses the bullpen cart to follow her home, and later when he shows up to her dinner party. We missed the part where Bereger tells her boyfriend to "suck my dick". Yeah, that would've been edited to "kiss my door", but still! Anyway, following the movie, Versus aired a show that featured an interview with Darryl Strawberry. I now like Darryl Strawberry.

Oswalt plays left field for Phillies in Astros' wild 16-inning win - Big League Stew - Yahoo! Sports
As if on queue, Houston's Jason Castro(notes) hit a fly ball to left, which Oswalt caught for the first out out the 15th. A baseball axiom that the ball always finds its way to someone playing out of position came true again.

He's probably better than whoever the Angels run out there.

August 25 - BR Bullpen
Events, births and deaths that occurred on August 25.
1965 - Moonlight Graham dies in Chisholm, MN. Graham played in one ML game, for the 1905 Giants, and did not get to bat. His character in W.P. Kinsella's Field of Dreams, later played by Burt Lancaster in the movie, made him a baseball household name.
1967 - The Twins' Dean Chance throws his second no-hitter of the month, defeating the Indians 2 - 1. On August 5 he threw five perfect innings in an abbreviated game against the Red Sox. Thus becoming yet another Mark Gubicza trivia answer.
1979 - Angel Don Baylor ties a club record by knocking in eight runs during a 24 - 2 slaughter of the Blue Jays. The 24 runs the 26 hits are both Angels record.
1991 - Manager Doug Rader is fired by the Angels and replaced by former Montréal Expos manager Buck Rodgers, who was let go earlier this season. The Buck stopped here. Sorry.
2001 - Bengie Molina sets a team record by stroking nine consecutive hits. The Angel catcher is the first Anaheim player to have consecutive four-hit games since Tim Salmon accomplished the feat in 1994.
Happy b-day:
1974 - Gary Matthews, outfielder; All-Star

The Rays are good: