Tampa Bay vs. Los Angeles - Recap - August 25, 2010
Things weren't looking good again for the Los Angeles Angels when Tampa Bay opened the game with a home run. Soon, though, the Angels were flooding the basepaths with runners, and most of them scored. Mike Napoli hit a grand slam, Hideki Matsui doubled in three runs and Howie Kendrick had a career-high five hits to help them win 12-3 on Wednesday and prevent the Rays from sweeping a series in Anaheim for the first time. The Angels stopped a three-game slide overall and a four-game skid against the Rays at home. They got outscored 14-6 in losing the first two games of the series and came into the finale 2-for-25 with runners in scoring position. Haren (2-4) allowed one run and three hits in six innings, struck out eight and walked four to end a two-game skid. The Angels had scored just 15 runs - 2.5 per game - in his first six starts since being traded by Arizona on July 25. " The home run has killed me,'' he said. " That's the second time that's happened to me this year. I won that game, too. It made me focus a little bit."

Two things about yesterday's game; 1) I don't get Haren's quote. Is he saying he only focuses when he's behind, or there are times when he's not focusing on the game? And, 2) Did you know yesterday was the tenth time this season that the Angels have scored at least 10 runs? That's almost half as many 10+ run games as they had at this point last season (they had nineteen 10+ run games at this point last year). The Angels 10 high-scoring games is just one less than the mighty Rangers, 3 more than the second place A's, and 8 more than the cellar-dwelling Mariners. However, compared to last season, the Angels have allowed 10 runs or more 12 times, which is five games less than last year. What does all of this mean? I have no idea, but if I were to try add some sort of reason to these numbers, I'd guess this year's club doesn't have the same offensive firepower as last season's, but have better starting pitching (I assuming blow-outs are the result of the starter getting shelled). Oh well. Here's some video: Haren hurls six frames of one-run ball - Dan Haren gives up one run on three hits while striking out eight over six strong innings, Matsui clears the bases with a double - Hideki Matsui gives the Angels the lead with a bases-loaded double to right field, plating three runs, and lastly, two reasons Rivera should never get another start at first base, Napoli leaps to rob Johnson of a hit - Mike Napoli makes a leaping grab at first base, taking a hit away from Dan Johnson, Napoli belts a grand slam to left field - Mike Napoli breaks the game open with a grand slam to left field in the third inning.

Ten things to know about how MLB waiver trades get made - Joe Lemire - SI.com
Section 10 of the Major League Rules -- occupying pages 58-71 of the rule book -- governs all forms of waiver transactions, including the waiver trades baseball fans are accustomed to seeing each August. While the end result -- players changing teams -- might be commonly understood, the process of how that happens in August is anything but.

Just in case you were wondering.

Report: MLB probe on leaked financial documents focuses on insurance - FOX Sports on MSN
The Pirates' documents offer a rare peek inside a team that made money by getting slightly less than half its income (about $70 million) from MLB sources — including revenue sharing, network TV, major league merchandise sales and MLB's website. The club's earnings were included in nearly 40 pages of statements that the Pirates submitted to Major League Baseball, which were subsequently obtained by The Associated Press. Team officials briefed local reporters on portions of the material Sunday. The AP wasn't invited to the session, which owner Bob Nutting said was ''aimed at the recent leak.'' The Pirates issued a statement Sunday, saying it was wrong for the financial statements to have been released to the AP.

This is funny. Well, maybe not to the Associate Press who is getting shut out by the Pirate organization for publishing Pittsburgh's financial statements. What do the Pirates expect the press to do? They're correct when they say that it was wrong for the reports to be released, but it wasn't wrong for the AP to publish them. 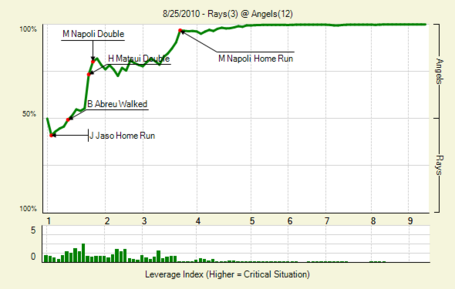 A big win, but no ground gained: 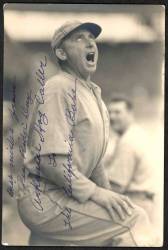 1909 - Cuban Giants 2B William Bedford is killed by a bolt of lightning while playing a game, as the electricity carries through his spikes, ending his life at age 23.
2002 - The first video streaming coverage of a major league baseball game takes place on the internet. Approximately 30,000 fans visit MLB.com to see the Yankees defeat the Rangers, 10 - 3.
Happy b-day:
1899 - Pea Ridge Day, pitcher (d. 1934)

Pea Ridge Day - Wikipedia, the free encyclopedia
Hall-of-Fame catcher Al Lopez caught for Day in 1931. In an Associated Press interview, Lopez recounted a story about a 1931 exhibition game against the New York Yankees. "The fans had been reading about him being a champion hog caller, so they all started calling 'Yip, yip yeeee!' He strikes out the first hitter, puts the ball and glove down and lets out this call. He strikes out the next batter and does it again. Babe Ruth was on deck, and he gets a big kick out of it. He’s laughing at this guy. Then he has Ruth with two strikes. It gets real quiet. The fans are hoping he'll strike out Ruth so he can yell again. On the third pitch, Ruth hits one a mile over the fence. Pea Ridge never did his hog call again.