Sean "Chone" Smith aka RallyMonkey5 had a front row seat to see our blow pen watching Peter Bourjos break out the #25 jersey and roam about in CF... 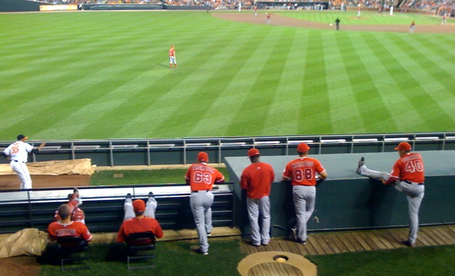 The Angels number 4/5 Starter, Trevor Bell, pitched great for 5 and a third innings, but an early hook from Mike Scioscia after a BB led to a bullpen implosion by Francisco "Naugles" Rodriguez and later Michael "Wrath of Halowood" Kohn.

The anemic Angels offense saw all of its scoring involving a suddenly hot Howie Kendrick, who hit a 2 run home rot open the scoring and later came home on a Mike Napoli single after doubling deep to left.

Peter "Whiskey Pete" Bourjos made his major league debut and looked good in the field, especially after watching Bobby Abreu waddle around in Left Field like the spawn of a fat walrus mated with read-feathered penguin.

Bourjos coverage in CF put a ghastly glare on just how slow the thirtysomething outfield defense of the Angels has been this season. For the UZR set, this was already calculated into the mix, but with even Torii Hunter capitulating on his defensive position and moving from Center to RF to make way for Whiskey Pete, the "gotta see it with my own eyes" crowd had to acknowledge that this team has suffered extra run bleeding at the cement shoes of its outfield D.