No Bullpen in Baltimore, Hunter Moves to Right. Halolinks

Share All sharing options for: No Bullpen in Baltimore, Hunter Moves to Right.  Halolinks

Angels get no relief from Francisco Rodriguez - latimes.com
Rodriguez went into the game with the Angels holding a one-run lead and Ty Wigginton on first base after drawing a one-out walk against starter Trevor Bell. But before his second pitch to Luke Scott, Rodriguez pointed to his eyes with the ball in his right hand because he was apparently having trouble seeing catcher Mike Napoli's signs. Plate umpire Jerry Layne immediately called a balk.Five pitches later (Rodriguez balks in the sixth inning - Video), Rodriguez (0-2) tried to throw a cutter low and inside to Scott. But the ball was low and over the plate, and Scott reached down and crushed it for a two-run home run that gave the Orioles the lead for good (Scott blasts a two-run homer to right-center - Video).

Up until this outing, Rodriquez had the best ERA in the bullpen (second-best ERA+) and it had been trending down. What's interesting is how quickly Scioscia pulled Bell, but then left Rodriquez in the game to face Cesar Izturis after giving up the homer to the first batter he faced and hits to Pie and Bell. Sciosia probably figured that once the lead had been given up, what's the point. Okay, so it's not so interesting after all. Highlights, yo: Wieters' play at the plate - Matt Wieters make it difficult to tag him out at home, Kendrick crushes a two-run shot in the fifth - Howard Kendrick blasts a two-run home run to left field to give the Angels a 2-0 lead in the fifth inning.

Angels-Orioles Preview - FOX Sports on MSN
Dismal clutch hitting has been one of many problems plaguing the Orioles, but they went 5 for 11 with runners in scoring position Monday after they were 4 for 35 in the previous five games. The Angels (54-54) lost for the ninth time in 12 games and failed to make up ground on AL West-leading Texas. Los Angeles is in danger of dropping under .500 for the first time since it was 27-28 on June 2. Ervin Santana (10-7, 3.65 ERA) will try to keep the Angels above the break-even mark as he looks to rebound from his worst start in six weeks. The right-hander was far from sharp but still managed to win his second straight start Friday, allowing a season-high seven runs - four earned - and 10 hits over six innings in a 9-7 victory over the Rangers. He was 3-2 with a 2.80 ERA in his previous six outings. Baltimore sends Brian Matusz (3-11, 5.46) to the mound hoping he can record his first home win this season. The rookie had another poor performance in his last start, lasting 3 1-3 innings while giving up five runs and four walks before escaping without a decision in a 6-5, 11-inning win at Kansas City on Thursday.

The Orioles had more clutch hits last night than they did in the previous 5 games.

Hunter makes permanent move to right field - angelsbaseball.com: News
Manager Mike Scioscia said before the game that rookie Peter Bourjos will be the center fielder from now on with Hunter moving to right and Bobby Abreu shifting to left. Scioscia confirmed before the game that this is not a temporary move. "Peter's going to play center field; you're not going to see Torii flip-flopping back and forth on a given day," said Scioscia before the series opener with the Orioles. "The situation, the way it presented itself right now, is a great time to do it. We definitely need some range in the outfield and outfield presence, and Peter can bring that. This isn't about what Torii was or wasn't doing in center field." Bourjos went 0-for-3 in his Major League debut and showed his speed and range in the two catches he made. Hunter, who turned 35 last month, said he understood the move and will support anything that makes the Angels better.

Torii Hunter is a team player.

Blinking Bourjos (with Erik Manning) - FanGraphs Baseball
But what if we took Manning’s excitement seriously? What if Manning’s seemingly inflated opinion of Bourjos — an opinion based on a combination of quantitative analysis, visual evidence, and je ne sais quoi — was actually grounded in something more significant than a hunch? In his book Blink: The Power of Thinking Without Thinking, Malcolm Gladwelll explores rapid cognition — i.e. the human capacity to draw eerily accurate and/or nuanced conclusions from limited information and narrow windows of experience. The extent of Manning’s experience "with" Bourjos is limited, for sure: some advanced metrics and a couple of Cedar Rapids Kernels games. But his feelings about Bourjos are somehow stronger than other people with similar experience. What is Manning seeing that others aren’t?

I've read the book Blink: The Power of Thinking Without Thinking (very good), and had never thought of how it could relate to baseball. I suppose you'll need to read the book to understand what I mean, but none the less, an interesting article.

Diamondbacks 6, Nationals 1: Collin Balester Gives Mark Week the Middle Finger - AZ Snakepit
The Colonel went on to close the game; it was only the third by a D-Backs pitcher this year - by the way the other two no longer play for Arizona. He finished with a final line of 9 IP, 5 hits, 1 run (a solo HR), 2 BB, and 5 SO. Not bad, Joe. Not bad.

Saunders gets his first National League win, and third complete game of the season.

Red Sox, Tribe benches clear in eighth - indians.com
"I just thought they were maybe taking some liberties," Francona said. "Everyone has their own opinions. Sometimes it gets hot." "That is part of the game and the players usually take care of their own thing, probably some of our guys felt like our best player was hit on purpose and they were probably trying to protect the guy," Indians manager Manny Acta said. "There is no room in the game for that kind of stuff, but they usually work it out themselves, just a lot of pushing and shoving, with some tough guys trying to find other guys."

This incident reminds me of the last season's Red Sox game wen Beckett and Abreu had some words. Here's some video of last night's game (who's the horse-faced douche?) Red Sox, Indians exchange heated words - Video Adrian Beltre is hit by a pitch, leading to benches clearing and an exchange of heated words, and: Hit batters lead to heated exchange - Hit batters on both sides lead to a heated exchange between the Red Sox and the Indians. As I've written before, I'm all for pitchers throwing at hitter in retaliation or intimidation, but Beckett's pitch that bounced of Choo's knee was BS. If you're going to throw at a guy, aim for his ass. (also, anyone else think Beckett looks like a less-cool version of Lou Diamond Phillips in La Bamba?)

Bids for Rangers start at 9 a.m. in bankruptcy court - Dallas Morning News
Mavericks owner Mark Cuban will go head-to-head with Hall of Fame pitcher Nolan Ryan in bidding for the Rangers at today's auction in federal bankruptcy court. Cuban's group, which includes Houston businessman Jim Crane, had the only bid submitted and approved by Tuesday night's deadline, according to the court-appointed restructuring officer. The bidding, which commences at 9 a.m., may conclude the drawn-out struggle for the ballclub. Rupert Murdoch's Fox Sports Network ended speculation Tuesday when it said it wouldn't bid. It never received MLB clearance, in any case. The court-appointed chief restructuring officer envisions bidders holed up in small offices at the Depression-era courthouse, sending a representative periodically before U.S. Bankruptcy Judge Russell Nelms with offers that must be at least $2 million higher than the previous bid. If follow-up bids are cash, the call for the next offer is straightforward, said Martin Sosland, the team's bankruptcy attorney. But if a bid has a noncash component – say, a promised prepayment on broadcast rights – it could take the experts some time to put a value on it, 30 minutes or longer. A league official, speaking on the condition of anonymity, told The Associated Press on Tuesday that MLB intends to work with the winning bidder, although it has the option of choosing the second-highest bid.

Mark my words, this is going to get ugly. Re-read the last sentence of the above clip, "MLB intends to work with the winning bidder, although it has the option of choosing the second-highest bid". THERE'S ONLY TWO BIDDERS! Does anyone else think MLB doesn't want Mark Cuban to be an owner?

White Sox's Juan Pierre muscles up for first home run in nearly two years - USATODAY.com
Pierre, known for his speed and not for his power, went 809 at-bats between home runs. It was the longest active homer-less streak in the Majors. Angels' Reggie Willits now carries the throne with 758 at-bats, followed by the Rangers' Elvis Andrus at 505.

Hooray for Pierre! Bummer for Willits. 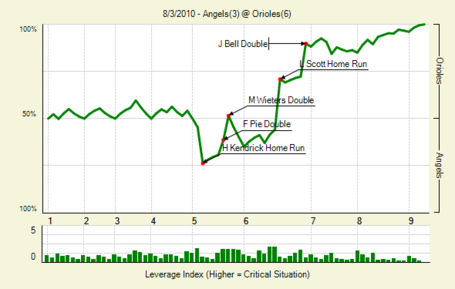 August 4 - BR Bullpen
Events, births and deaths that occurred on August 4.
1972 - The Angels beat the Royals, 4 - 3, in 10 innings. Vada Pinson shows the way home with five hits and three RBIs.
1985 - In a day of milestones, Tom Seaver becomes the 17th pitcher to win 300 games and Rod Carew becomes the 16th player ever to collect 3,000 career hits. Seaver pitches the Chicago White Sox to a 4 - 1 six-hit victory at Yankee Stadium as 54,032 New Yorkers cheer him on. Carew hits a single to left off Frank Viola in the 3rd inning of the California Angels' 6 - 5 win over the Minnesota Twins at Anaheim Stadium.
1993 - White Sox 3B Robin Ventura charges Nolan Ryan after a pitch hits him in the 3rd inning. Ryan gets Ventura in a headlock and throws six punches. Ventura is suspended two games for his actions, while Ryan is not disciplined. Who hasn't seen this picture?
1997 - At Anaheim, Jose Valentin, Dave Nilsson, and Jeromy Burnitz homer in the 4th inning, all off Ken Hill, as Milwaukee beats Anaheim, 5 - 2, for its 10th victory in 12 games. The loss drops Anaheim into a tie for first place in the AL West with the idle Seattle Mariners. (Spoiler alert...The Angels don't win)
1999 - Prior to a game with the Royals, with his team in the midst of a slump, Angels' batting coach Rod Carew suggests the club use a single bat through the starting lineup as a way of loosening up the players. When leadoff hitter Orlando Palmeiro strikes out in bottom half of the first inning, he drops the bat for the next hitter to use. Umpire Tim Tschida sees this as an act of defiance and ejects Palmeiro from the game. Anaheim manager Terry Collins eventually convinces Tschida that Palmeiro wasn't trying to show him up, and the umpire changes his decision and allows him to stay in the game. The Angels go on to defeat the Royals, 4 - 3. I've got an idea! Why don't the Angels relief pitches use just one arm for the rest of the season. Might I suggest Dennis Eckersley's, circa 1988 to 1992.
Happy b-day:
1879 - Paddy O'Connor, catcher (d. 1950) Best friend of Paddy O'Furniture
1896 - Cliff Lee, outfielder (d. 1980) No, not the same guy. Unfortunately.