Share All sharing options for: Angels Swept By Orioles, Are Halos Worst Team in Baseball?  Halolinks

The Payoff Pitch
There's a new blog in town, and from what I've read so far, a good one. Check it out.

Orioles vs. Angels: Cesar Izturis lefts Orioles over Angels, 5-4 - baltimoresun.com
The Orioles won Thursday for the third straight game since Showalter took over, this time a 5-4 walk-off victory over Los Angeles that marked the club's first three-game sweep of the Angels in nearly 11 years. It's particularly difficult to beat a team that is getting effective starting pitching nightly, as the Orioles did against the Angels. They recorded three consecutive quality starts for the first time since mid-May. That's likely a bigger reason for the wins than anything Showalter has provided.

Are the Orioles pitchers good or are the Angels hitters bad? Baltimore's pitchers have given up more runs per game while allowing the most home runs and hits. Although the Angels managed to gather 30 hits in the 3-game seires, more than half of those - 17, came in one game...which they still lost. No, the Orioles pitchers are not that good, in fact, the Orioles pitchers are bad. The Angels' hitters are worse. FYI, Francisco Rodriguez's ERA has increased by over a run in his last two outings. You know who else is bad? Umps call Patterson safe on close play - The umpires rule that Corey Patterson touched second base on his way back to first, prompting Mike Scioscia to argue. Okay, maybe it wasn't the worst call (see below for a horrible call by an umpire). How about this Jimmy-Jack: Hunter ties it with a three-run homer - Torii Hunter ties the game with a three-run homer to left field in the eighth inning. (and in reference to agent_99's post) You build me up, Buttercup, just to let me down...Izturis hits a walk-off single in the ninth - Cesar Izturis wins it for the Orioles with a single to center field in the ninth inning, plating Julio Lugo.

Angels-Tigers Preview - FOX Sports on MSN
Weaver has gotten used to facing tough opponents on the mound, going 2-3 with a 3.27 ERA in his last five starts while opposing Texas' Cliff Lee twice, Oakland's Trevor Cahill, Seattle's Felix Hernandez, and Boston's John Lackey in that span. He outdueled Lee on Sunday by allowing one unearned run over seven innings of a 4-1 victory. Weaver is 2-3 with a 6.51 ERA in seven career starts against the Tigers. Detroit third baseman Jhonny Peralta is 8 for 20 against him. Verlander is 5-0 with a 2.55 ERA in his last five home outings, but did not get a decision Saturday at Boston after yielding two runs in seven innings of the Tigers' 4-3 loss. Angels veterans Torii Hunter (.324), Bobby Abreu (.368) and Hideki Matsui (.333) have all had success against him. The Tigers have won five straight over the Angels after losing the first two meetings this year.

Marlins cry foul on call - Video - marlins.com
Umpire Bob Davidson's foul call on a hard grounder down the third-base line in the ninth has the Marlins crying foul.

Horrible call by Davidson. What's entertaining about this whole thing are the Marlin announcers. They sound like they're about ready to cry.

Chasing the Rangers - Mark Cuban's blog maverick
So why did I go chasing the Rangers despite all the negative media attention ? Because I believe it was the right thing to do. FIrst some background. This wasn’t a spur of the moment thing. More than a year ago, before the current parties were involved (or at least I was told there weren’t others involved), I was contacted by someone the team owed a lot of money to and asked if I would be interested in buying the team side by side with them. I said yes. Got information. Did some very preliminary homework and told the group I was interested.

This is why I like Cuban. Can you see any other owner blogging about anything? Arte's a great owner, but this is entirely different level of team commitment by an owner.

Friday Filberts (SABR edition) - SweetSpot Blog - ESPN
Speaking of movies ... You probably know that The Other Guys opens today. Will Ferrell's one of the stars (which makes me want to see it). You might also know that Derek Jeter's got a small role (which makes me not want to see it). What you probably don't know is that Ferrell's such a big Angels fan that his boss in the movie -- played by Michael Keaton -- is Captain Gene Mauch (which kind of makes me want to see it again).

Catwalk costs Rays game, Maddon wants 'a real baseball field' - Big League Stew - Yahoo! Sports
It turns out that Mark Teixeira was right when he said that the goofy Tropicana Field catwalks were one day going to help decide the outcome of an important baseball game. That day came on Thursday, when a towering but routine popup from Jason Kubel(notes) hit the highest catwalk 190 feet above the infield and came down for a go-ahead RBI single in the Minnesota Twins' 8-6 victory over the Tampa Bay Rays. Watch the catwalk craziness here

Fan dies on field before Dodgers game - Yahoo! Sports
A baseball fan participating in Mormon Community Night at Dodger Stadium has died after collapsing on the field during batting practice. Officials say Don Hawkins was standing near the third-base coach’s box Thursday night when he fell ill. He was one of about 4,000 Mormons on hand for the annual event, which included his wife and grandson. 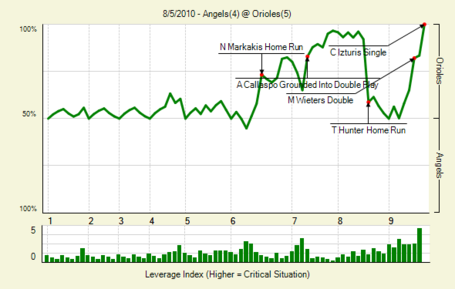 August 6 - BR Bullpen
1967 - Minnesota's Dean Chance throws a perfect no-hitter for five innings against the Red Sox before the game is called. Chance wins 2 - 0.
1981 - National League owners agree to the $20.5 million sale of the Cubs to the Tribune Company. In three weeks, Cubs stockholders (led by Bill Wrigley's with 81 percent) will approve the sale. The Tribune Company sold the Cubs this year to Thomas Ricketts for between $850-$900 million.
1982 - Just five days after hitting three home runs in a 5 - 4 loss to the Twins, California's Doug DeCinces hits three more home runs in a 9 - 5 win at Seattle, joining Ted Williams as the only American League players ever to hit three home runs in a game twice in the same season. At least they won this time.
1996 - Marcel Lachemann of the stumbling Angels quits as manager. John McNamara will take over for the rest of the season.
Happy b-day:
1945 - Andy Messersmith, pitcher; All-Star And Western High School (Anaheim) alum

Should I stop including the standings?:

Swept by the worst: