Angels falter after Haren delivers gem - angelsbaseball.com
Felix Hernandez and Dan Haren took the art of pitching to a high place on Tuesday night, using power and precision to compound the frustration of a pair of struggling offenses in front of 18,737 at Safeco Field. Callaspo, the first hitter Hernandez faced, knocked him on his backside with a bullet the pitcher managed to glove falling backward. The Angels loaded the bases with one away on singles by Torii Hunter and Aybar and a walk by Mike Napoli. But Jeff Mathis banged into an inning-ending double play. "We had him on the ropes a couple times," Angels manager Mike Scioscia said, "but we couldn't get some early runs which would have made a difference in that game."

You can't really fault the Angels offense for last night's loss, that honor falls on the halo bullpen. Facing Felix Hernandez will often shutdown a team's run production, but when facing an offense such as Seattle's, a 1-0 victory can be expected. Except when your favorite team has a pen as inept as this season's Angel team. Some video: Felix snares the comebacker - Alberto Callaspo rips a comebacker to Felix Hernandez, who makes the heads-up snag, Kendrick plates the first run with a double - Howard Kendrick breaks the scoreless tie in the eighth with a double to left-center, scoring Alberto Callaspo (this is one of the best swings I've seen Kendrick put on a ball), Haren fans eight over seven shutout frames - Dan Haren strikes out eight Mariners over seven shutout innings.

Angels-Mariners Preview - FOX Sports on MSN
With the loss, Los Angeles finished 11-16 in August after going 9-17 in July. The end of this past month was particularly difficult for the team's hitters, who have posted a .183 average and scored seven runs over the past five games. The Angels would appear to have a chance to break out of that funk against Seattle left-hander Jason Vargas (9-7, 3.53 ERA), who is 0-2 with an 8.03 ERA since his three-game win streak ended. The left-hander, though, is 1-0 with a 1.71 ERA in three starts this season against Los Angeles. The Angels will counter with Trevor Bell (1-4, 5.07), whose tough luck as a starter continued Friday. The right-hander gave up two runs over a career-high seven innings Friday against Baltimore but took the loss in a 3-1 defeat, dropping to 0-3 with a 5.33 ERA in five starts this season.

This is the alternate universe version of last night's game.

Hunter's RBI drought reaches 18 games - The Orange County Register
Since returning from the suspension, Hunter has gone 18 games without driving in a run. It is his longest RBI drought as an Angel (topping a 12-game stretch in August 2008) and the longest of his career since he went 21 games RBI-less in April and May, 2000 – earning a demotion to Triple-A by the Twins.

It might help Hunter's run production if there were runners on base when he comes to bat.

From what I remember, it came down to the Reds and the Angels as to where Chapman would sign. Bummer.

Many have hang-ups about September call-ups - latimes.com
There's a good chance at least one of baseball's six pennant races will be decided by a player you've never heard of. And Dodgers Manager Joe Torre says that's not right. "It's unfair," he insists. ...the time-honored but totally archaic rule that allows major league teams to expand their rosters from 25 to 40 players each Sept. 1. As a result, teams play the first five months of the season under one set of rules and the final month — the pennant stretch — under a different set.

Just wanted to let you know if you didn't already, any players called up after August 31st aren't eligible for the Angels post-season roster except for a few certain circumstances.

It's time for Manny Ramirez to step up for the Chicago White Sox - FOX Sports on MSN
Despite attending high school in New York and conducting English interviews throughout his career, he insisted on a Spanish interpreter for his introductory news conference after he finally arrived in Cleveland on Tuesday. He wore Oakley sunglasses — with a MP3 player attached — in the basement-like interview room, while answering the first couple questions. And when a reporter asked if he intended to cut his hair to conform to the White Sox appearance policy, Ramirez dismissed the question as "stupid" and said he’s only worried about playing baseball. On Tuesday, Manny being Manny meant more of the same, tired attitude.

There was a time when I had hoped Manny would be calling Anaheim home. What the hell was I thinking?!? 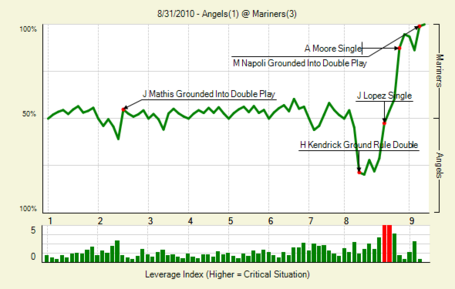 September 1 - BR Bullpen
Events, births and deaths that occurred on September 1.
1979 - Carney Lansford hits 3 consecutive home runs as the Angels down the Indians 7 - 4.
1989 - Eight days after banning Pete Rose from baseball for life‚ Commissioner Bart Giamatti dies suddenly of a heart attack at the age of 51. You don't tug on Superman's cape, you don't spit into the wind, you don't pull the mask off the ole Lone Ranger, and you don't mess around with Pete.
Happy b-day:
1953 - Rob Wilfong, infielder