Reagins made a good trade, Angels are not done. Halolinks.

Share All sharing options for: Reagins made a good trade, Angels are not done. Halolinks.

Angels' Tony Reagins doesn't brush aside criticism - latimes.com
The Haren deal was especially lopsided — in favor of the Arizona Diamondbacks, who acquired Saunders, a 29-year-old left-hander still two seasons from free agency, then had to fight the urge to burst out laughing when the Angels agreed to throw in reliever Rafael Rodriguez and minor league left-handers Tyler Skaggs and Patrick Corbin, two of the team's top 12 prospects according to Baseball America.

This article was written by the Times' Kevin Baxter. Kevin Baxter is probably the only person on earth who thinks the Angels got the short end of the stick in the Haren deal. Baxter writes, "Never mind that Saunders is younger, cheaper and has more wins over the last three seasons than Haren. Reality, apparently, can be evasive at times." You know what else can be evasive at the Times (see what I did there?) How about the use of up-to-date baseball analysis. He's right when he states Saunders has more wins. Saunders has 41, Haren has 40. But, why is he cherry-picking wins? And why 3 years worth of wins? Wins are not a good indicator of a pitcher's value, but if you insist on using wins how about this; Over the last FOUR years Haren has 55 wins to Saunders' 49. Oh, I see why he used 3 years. Let's look at this using something other than wins to see which pitcher has been better over the last 3 seasons, seasons where Haren has thrown 654.1 innings to Saunders' 560:

To cherry-pick one stat to try and make a point is ridiculous. Using stat like wins only makes it worse.

Angels-Indians Preview - FOX Sports on MSN
The Los Angeles Angels beat Cleveland to spark their current winning streak. Scott Kazmir hopes another strong outing against the Indians will help his team keep it going. Looking for his first win in more than a month, Kazmir tries to lead the Angels to a fifth consecutive victory Tuesday night against the Indians at Progressive Field. Kazmir (8-13, 5.98 ERA) has not won since Aug. 7 at Detroit, but allowed one run, two hits and struck out six in six innings of Thursday's victory over the Indians. The left-hander is 0-4 with a 4.28 ERA in his last six starts, but has a 2.31 ERA in the last two. His teammates, however, have scored a combined three runs in those games. Mike Napoli, who hit his career-high 24th home run in the Angles' 3-0 win over the Mariners on Sunday, homered off Indians scheduled starter Josh Tomlin (3-3, 4.18) on Thursday. The right-hander has allowed three runs in each of his last three outings, going 2-0 with a 4.76 ERA during that span. He gave up three hits in six innings versus Los Angeles last week.

Angels can't expect young pitchers to solve all bullpen problems - latimes.com
"The arms are there, the stuff is there, but you have to have the ability to make pitches when it counts," Angels pitching coach Mike Butcher said. "We need to slow the game down, make pitches and stop the bleeding. The pieces are there, but a larger sample size will be to see these guys in a whole season." Thompson, 26, who has shuttled between triple A and the big leagues for four years, has been much more effective -- a 1.15 ERA in 10 appearances -- since adding his cutter. "We loved his arm a couple of years ago, but he got stale, stagnant and wasn't improving," Scioscia said. "He's redefined himself in the last year. He came up with a cutter, he has a good downhill angle and he's throwing strikes. He's pitched well in some pressure situations."

A couple interesting quotes from Butcher and Scioscia. (I love it when a coach uses the term "sample size")

K-Rod due back in court - Mets Blog - ESPN New York
Francisco Rodriguez is scheduled to appear at the Queens Criminal Courthouse on Tuesday morning for a hearing regarding his third-degree assault and second-degree harassment charges.

It's hard to point at the sky when you're wearing handcuffs: 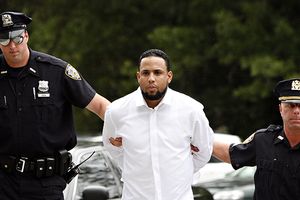 In defense of Babe Ruth, Barry Bonds, jaywalkers, and all the other scofflaws that make America great. - By Bill James - Slate Magazine
First of all, I have absolutely no doubt that, had steroids and other performance-enhancing drugs existed during Babe Ruth's career, Babe Ruth would not only have used them, he would have used more of them than Barry Bonds.

Bill James has something to say, and dammit you're going to listen.

Documentarian Ken Burns brings 'Baseball' up to date with sequel - USATODAY.com
Baseball: The Tenth Inning, which is broken into two two-hour installments, debuts Sept. 28 and 29 on PBS. Burns discussed it last week with USA TODAY.

One of the only things I took away from Burns' first baseball documentation was the reason Tim Raines slid headfirst was so he wouldn't mess up the cocaine he had in his back pocket of his uniform. Why do I get the feeling that after I watch the sequel, I'm going to have to live with the picture of a syringe sticking out of Mark McGwire's butt?

September 14 - BR Bullpen
Events, births and deaths that occurred on September 14.
1905 - Joe Tinker and Johnny Evers engage in a fist fight on the field during an exhibition game in Washington, IN, because Evers took a taxi to the park, leaving his teammates in the hotel lobby. The pair will not speak to each other ever again. Let me get this straight, if I take a taxi and leave my wife at the hotel, she'll never talk to me again?
1978 - The Angels score 13 unearned runs in the 9th inning to cap a 16 - 1 win over the Rangers.
1990 - Mariner Ken Griffey, Sr. and his son, Junior, become the first father and son to hit homers in the same major league game. The back-to-back blasts are given up by Angel hurler Kirk McCaskill. Who said the Angels didn't do anything in the '90's?
1994 - The remainder of the baseball season is canceled by acting commissioner Bud Selig after 34 days of the players' strike. There will be no World Series for the first time since 1904. I still haven't forgiven him...and probably never will.
Happy b-day:
1916 - Jerry Doggett, broadcaster (d. 1997) Dodger broadcaster from 1956 to 1987.
1984 - Bobby Mosebach, pitcher
R.I.P.:
1943 - Bill Murray, infielder (b. 1893) I think "Caddyshack" was his best movie.