Bourjos good and bad in loss, What would you change? Halolinks

Share All sharing options for: Bourjos good and bad in loss, What would you change?  Halolinks

Duncan played Matsui's ball off the wall barehanded and threw to cut-off man Asdrubal Cabrera, who fielded the ball on the short hop. Cabrera, in turn, short-hopped his throw to catcher Lou Marson with Hunter arriving at full speed. Marson took Cabrera's throw and then played tackling dummy to Hunter. Marson went down, but held the ball to end the inning. "As fast as it was, it was really clean. It fired me up more than anything that happened in that game." While Duncan felt the adrenaline of the play, Marson took its impact. "He got me pretty good," Marson said of Hunter. "It was pretty much what I expected from a guy trying to blow me up. "I knew he would come in hard, and I knew it would be a clean play, because he plays the game the right way. He's one of my favorite players." (Here's video of the play: Marson hangs on as Hunter slides home - Lou Marson takes the throw to the plate and hangs on as Torii Hunter runs into him, saving a run and ending the top of the sixth)

Yeah, yeah, yeah...everyone loves Torii Hunter. Even the guy who's getting run over by him. Anyway, here's a clip of Bourjos' triple: Bourjos belts an RBI triple in the gap - Peter Bourjos blasts a three-bagger into the gap in right-center, cutting the Angels' deficit to one. Who else thinks that for any of the other players on the club, that hit would've been a double (and maybe a long single for a couple of slo-pokes...cough...Rivera...cough)? Yet, it was a close-play-triple for Bourjos. I'm looking forward to seeing if Bourjos' style of play will provide the much needed spark in the Angels offense.

Angels-Indians Preview - FOX Sports on MSN
The Los Angeles Angels ace will try for his first win in over a month when he faces the Cleveland Indians on Wednesday night. Weaver (11-11, 3.06 ERA) is 0-4 in his last six starts and has two victories in nine outings despite posting a 2.71 ERA. He allowed one run and five hits over eight innings in a 4-3, 14-inning win over Seattle on Friday. The Angels saw six of their nine hits go for extra bases, including five doubles. Bobby Wilson and Peter Bourjos drove in runs in the seventh, but it wasn't enough to complete the comeback. They'll try to bounce back against Jeanmar Gomez (3-3, 3.07), who lost his third straight decision after giving up two runs in six innings of a 3-0 defeat to Seattle on Sept. 5. He was skipped in the rotation last week to limit his innings after throwing extensively in the minors. The rookie right-hander is making his first start against the Angels.

I hate that last sentence, "making his first start against the Angels". Which, of course means, "dominating the Angels hitters". Also, is it just a coincidence that the Angels have a hard time putting up runs in support of Weaver, or is there something to run-support and pitchers? Are there pitchers who consistently get more support and others who must pitch shutouts to win?

Angels, Bourjos go down not swinging - The Orange County Register
In keeping with that, Scioscia stuck with a couple young players in pressure situations, perhaps learning something useful for 2011 in the process. As is often the case with young players – he got mixed results. Bobby Cassevah had replaced Kazmir in the sixth. But the Indians loaded the bases with one out in the bottom of the seventh. Scioscia stuck with Cassevah against pinch-hitter Travis Hafner and Cassevah rewarded his faith. He got Hafner to bounce into an inning-ending double play, keeping the Angels within a run.Scioscia's pinch-hit options were limited (switch-hitter Hank Conger and his one major-league at-bat was the only left-handed option Scioscia had) and he stuck with Bourjos. Bourjos never got his bat off his shoulder, taking five pitches including four consecutive fastballs and striking out when Perez hit the outside corner with a tailing 95-mph fastball. "Until I got to two strikes, I was looking slider," Bourjos said. "I faced him last week (a flyout to end another Angels' loss) and that's how he worked me – a lot of off-speed. I should have probably looked fastball and reacted (to an off-speed pitch). That's a bad at-bat. I need to put the ball in play."

Bourjos' quote is interesting, as it shows he's capable of thinking and making adjustments.

Kazmir 'making progress' in second half - The Orange County Register
In eight starts since returning from the DL, Kazmir has a more palatable 4.06 ERA and slightly improved 1.44 WHIP. Winning has come no easier for him than the rest of the Angels' support-starved starting pitchers. He is 1-5 since the break – and has lost nine of his past 10 decisions. "I think his fastball command, although it's still not where he needs it to be, has been better," Scioscia said. "His slider is a little more consistent and his velocity has picked up from the beginning of the year."

I can live with Kazmir hanging around the 4.00 ERA neighborhood. Regarding his velocity, in Kazmir's first start of 2010, his fastball had an average speed of 90.27 mph and maxed out at 93. Last night's data isn't available yet, but in his start on 9/8/10 against the same Cleveland team, Kazmir's fastball topped out at 91.1 mph with an average velocity of 89.61. No increase there. Maybe Scioscia was talking about Kazmir's slider velocity when he says it's "picked up". Kazmir's slider was clocked at an average speed of 80.36 last week compared to 78.84 in his first start, so yeah, there is an increase. Anyway, hopefully Kazmir can continue his improvement.

Playing the God of Baseball - FanGraphs Baseball
Loria, the Nuttings, David Glass, and Frank McCourt. Gentlemen, thanks for playing… you’re all fired. Time to get some owners in position that either want to be competitive instead of getting fat on Luxury Tax dollars, or (as is the case with McCourt) realize that coming into ownership leveraged deep and then going up to your gills in debt isn’t good for the best interests of baseball.

What would you change if you were the God of Baseball? Salary cap? Instant replay? Please comment below.

Prosecutor: Man drank tequila and beer for hours before fatal crash - FOX Sports on MSN
Data from the minivan showed Gallo accelerated from 55.9 mph to nearly 66 mph in the five seconds before the crash and took his foot off the accelerator one second before impact, Price said. The speed limit on the city street was 35 mph. ''Within seconds of the collision, the defendant turned to his stepbrother and said, 'Run, bitch, run,''' the prosecutor said. ''Then he opened the door of the minivan and fled.'' The first prosecution witness, Anaheim police homicide Detective Daron Wyatt, testified that he searched for the minivan driver as a crowd of about 60 people gathered and rescue crews worked to help the victims. Wyatt broke down when asked to describe Courtney Stewart, whose body was pulled from the mangled car as he watched. Pearson was also pronounced dead at the scene. Adenhart died later in surgery. Stewart, a student and former cheerleader at California State University, Fullerton, did not have any external injuries on her body, Wyatt said. ''She was beautiful,'' he said, adding later that Stewart ''looked like she was asleep.''

A’s pitcher Breslow is a bighearted brainiac - Yahoo! Sports
The smartest man in baseball recoils at being called the smartest man in baseball. It sounds too pompous, too arbitrary. And then Craig Breslow starts waxing on about the wonders of DNA sequencing. So it’s no surprise that the smartest man in baseball is on a mission: He wants to eradicate a disease. First through genetic research in previous offseasons, and today with his Strike 3 Foundation, Breslow exemplifies the athlete who doesn’t just parrot a cause because it sounds good. He lives it, breathes it and obsesses over it, far more than his earned-run average (a well-above league-average 3.31) or strikeouts (nearly one an inning). In the two years since starting Strike 3, Breslow has raised more than a quarter million dollars, and the foundation’s $100,000-a-year grant allowed Smilow Cancer Hospital at Yale to start a Pediatric Bone Marrow Transplant Program.

I thought I'd follow the horribly sad drunk driving story with a link to a story about the good in baseball (and society). It's good to know that for every dipshit Andrew Gallo, there's at least one Craig Breslow. 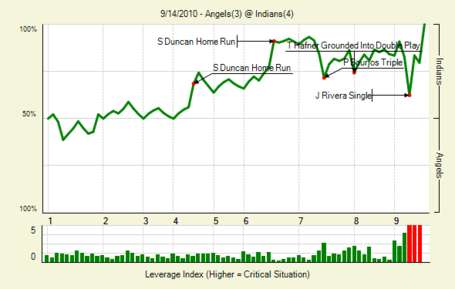 Tracking Home Runs - The Baseball Analysts
Joey Votto slugged his 34th home run last night as the Cincinnati Reds pummeled Barry Enright and the Arizona Diamondbacks, 7-2. His dinger was overshadowed by the fact that Jay Bruce jacked two homers in his first two trips to the plate after missing a dozen games. Nonetheless, Votto's four bagger was his Major League Baseball-leading 17th HR to the opposite field according to play-by-play announcer Thom Brennaman. I happened to be watching the game at that moment and made a note to check Votto's scatter plot on Hit Tracker, which logs and calculates the trajectory and distance of every home run in Major League Baseball. As it turns out, Greg Rybarczyk's site indicates that Votto has produced 19 homers to the left of straightaway center field.

Padres offense wakes up, Heath Bell survives ninth in win at Colorado - USATODAY.com
Monday they slowed the Rockies Express with a 6-4 victory and Tuesday night they scored seven runs -- needing every one of them to escape with a 7-6 victory at Coors Field.Starter Jon Garland pitched seven strong innings for the Padres. But closer Heath Bell, who has a tendency to make things more interesting than his 29 consecutive save conversions would indicate, got into immediate trouble in the ninth.

Much needed Padre win...in the style of former Angel victories, the nervous save.

Elimination number down to 10:

September 15 - BR Bullpen
Events, births and deaths that occurred on September 15.
1923 - Paul Strand of the Salt Lake City Bees connects for his 290th hit of the season, a new Organized Baseball record. He will finish with 325, a mark that has never been topped.
1952 - The Braves play their last game in Boston's Braves Field before moving to Milwaukee, WI, losing to Brooklyn's Joe Black 8 - 2. The Dodgers clinch a tie for the pennant. The crowd of 8,822 is the Braves' second largest of the season. What, don't they like baseball in Boston?
1952 - In a Cold War move, the Russians decry the American game of baseball by citing their own game of "lapka" as being the progenitor of baseball. They call American players "slaves." The State Department links the Soviet claim as the founders of baseball as part of its "Hate America" campaign.
1966 - Tom Phoebus of Baltimore begins his ML career with a 2 - 0 shutout of the Angels. Apparently the Angels have always had trouble beating pitchers who are making their debut.
1997 - Anaheim Stadium, the Big A, gets a new name: Edison International Field of Anaheim. Edison, a utility giant, will pay $50 million over 20 years for a package that includes the name of the stadium, home to the Angels. 20 years? Wow, that went by fast!
2002 - The Angels trounce the Rangers, 13 - 4, as 3B Troy Glaus strokes three home runs. That's what the Angels need, someone who can stroke it.
Happy b-day:
1881 - Slow Joe Doyle, pitcher (d. 1947)
1893 - Speed Martin, pitcher (d. 1983)