Pitching before another intimate gathering of 10,183 at the baseball ghost town that is Progressive Field, Weaver (12-11) yielded only a fourth-inning single to Shin-Soo Choo, striking out seven without walking a batter. And afterward he gave credit to Conger, who spent much of his afternoon studying video of Weaver and the Indians' hitters to get a feel for both. "He did his homework before the game," Weaver said. "He kind of got an idea of what I wanted to do. And he brought it out there into the game. So it was nice. It was a great experience for both him and me." Conger said he also talked to teammates Mike Napoli, Jeff Mathis and Bobby Wilson, all of whom have caught Weaver, to get a more complete scouting report. The extra work paid off, because Weaver rarely had to shake off Conger's pitch selections.

Congratulations to Hank on his first big league hit and RBI (here's the video: Conger plates two runs with first career hit - Hank Conger drives in two runs with his first Major League hit, giving the Angels a 4-0 lead). This game also saw a couple oddities; 1) Hideki Matsui hit his 12th major league triple. You don't believe me? Here's video proof: Matsui legs out a triple to score Hunter - Hideki Matsui hits his first triple of the season, scoring Torii Hunter and giving the Angels a six-run advantage, and 2) The Angels give Jered Weaver some run support. What, again you don't believe me? Well then, check this out: Weaver hurls seven shutout frames - Jered Weaver delivers seven dominant innings, holding the Indians scoreless on one hit and striking out seven. While watching this highlight, I noticed how often Weaver threw fastballs for strike three, but was confused as to why, while only giving up 1 hit and no walks, his pitch count was high (100 pitches after 7 innings). Although I did watch the game, I wasn't paying close attention to Weaver's performance. Were the Indian hitters fouling off a large number of pitches? Another thing...if you surf around the internet, you might have read a few articles about the A.L. Cy Young race between C.C. Sabathia and Felix Hernandez. The talk is, does Hernandez warrant Cy Young talk even though he doesn't have as many wins as Sabathia? What I'm curious about is why hasn't Weaver garnered much talk from the "wins aren't important" crowd? Weaver now has an ERA under 3.00 and leads the league in strikeouts. Two of the 3 stats the typical Cy Young voter looks at when making their selections.

Angels-Indians Preview - FOX Sports on MSN
Santana attempts to set a career high in wins by getting his first against the Cleveland Indians on Thursday night. Although this has been a disappointing season for the Angels (71-74), Santana (16-9, 4.00 ERA) has been a bright spot. He ranks among the AL leaders in wins, needing one to surpass the personal best he set in 2006 and matched in 2008. The right-hander has benefited from good run support, receiving 5.63 runs per start. He is 8-2 in his last 10 outings despite a 4.76 ERA, helped by 7.69 runs from his teammates. The Angels, though, could be in for a tough night offensively against Carmona (12-14, 3.86). Carmona has been a rare bright spot of late for the Indians, who are trying to avoid finishing at the bottom of a division for the first time since 1991. He didn't need much help Friday, throwing a three-hitter with seven strikeouts in a 2-0 win over Minnesota. That came seven days after he tossed a four-hitter while fanning six in a 1-0 loss at Seattle, as the offense mustered three hits.

Ervin Santana is the "Anti-Weaver" when it comes to run support.

Conger's big-league debut a big success - The Orange County Register
"They pranked me," Conger said of the faux souvenir. "I was like, 'Ah, they misspelled my name on the baseball.' " The real ball was tucked away, unmarked, in a sock in his locker. Weaver came over and added another souvenir to Conger's collection – the game ball from the two-hit shutout he caught in his debut. Both (along with the lineup card if Conger can get his hands on it) will go to his parents in Huntington Beach. "Dad likes to keep all my stuff," Conger said. "He's got everything all the way back to Little League."

Next up: Mark Trumbo's first hit.

Sam runs down the many quotes from Scioscia regarding Kazmir's return to tip-top form. 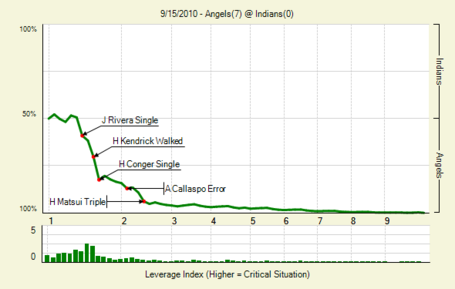 Brandon Wood, meet Tony Pena Jr. - HardballTalk
With his 0-for-3 on Sunday, Brandon Wood went over 200 plate appearances for the season and his average dwindled to .160. If he doesn't get another at-bat all year, he'd finish with a .397 OPS that'd rank as the lowest for any player in the expansion era.

I honestly feel bad for Wood. He pinch-hit last night and, sorry to say, he struck out.

Yankees Caps Are Popular Among Criminals - NYTimes.com
A curious phenomenon has emerged at the intersection of fashion, sports and crime: dozens of men and women who have robbed, beaten, stabbed and shot at their fellow New Yorkers have done so while wearing Yankees caps or clothing.

No wonder the New York criminal element favor Yankee garb, here's their idol: Must C Controversial: Jeter to first on phantom HBP - Derek Jeter is awarded first base on a ball that hit his bat and not his body, eventually scoring on a Curtis Granderson home run. Actually, I don't fault Jeter for trying to get on base any way he can. This play only highlights, once again, the failings of the umpiring crew.

Saunders Lackluster in Arizona - FanGraphs Baseball
The Arizona Diamondbacks’ decision to trade Dan Haren for Joe Saunders and prospects was largely panned around the sabermetric community, and indeed, much of the baseball community at large. Mostly, that is because Dan Haren is just a really fantastic pitcher, but the fact that the return was two unimpressive prospects and a back-end starter like Joe Saunders simply made the trade an unacceptable squandering of resources on the part of the Diamondbacks. Saunders’s performance in Arizona to date has done nothing to dispel this notion.

The Embarrassment of Riches: Jamie and Frank McCourt - SI Vault
Frank, a real estate developer who started out in the 1970s by building parking lots in Boston, took the stand; L.A. Weekly reported that he blinks 75 times per minute under questioning.

I just thought this was funny. Someone is actually counting the number of times Frank McCourt blinks his eyes.

New York Mets spokesman non-committal on report that team photo won't include Francisco Rodriguez - New York Daily News
Rodriguez and Johan Santana were the only Mets who could not attend the photo shoot before Wednesday night's game. Club officials said that Santana, who is recovering from shoulder surgery, would be photo-shopped into the image. The Mets have placed him on the disqualified list, don't want to pay him for the remainder of this season and could be seeking to void the deal. And they've cleaned out his clubhouse locker and given it to another player.

I felt bad that Rodriguez might be left out of his team's photo, but he can have this one... 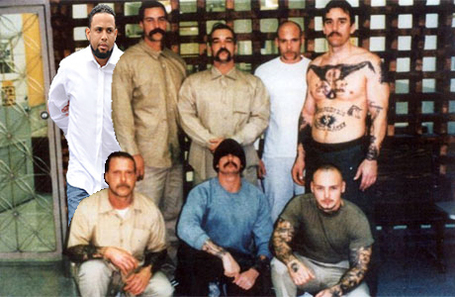 Resurgent Philadelphia Phillies turn heads of baseball insiders as NL favorite - Jon Heyman - SI.com
Adrian Beltre, meanwhile, will turn down the $5 million 2011 option he holds. Red Sox people say they wouldn't be surprised if Beltre tries to duplicate the $64 million, five-year contract he received with Seattle after his big year in Los Angeles in 2004

Yeah, I know, the title doesn't match the tidbit below it, but within this post, Heyman speculates on what it will take to sign Beltre this off-season. Sounds like he's pricing himself out of Anaheim.

Colorado Rockies avoid being swept, keep pressure on San Diego Padres - FOX Sports on MSN
Tulowitzki had his third multihomer game in a little more than a week and tied a career high with seven RBIs to help the Rockies beat the NL West-leading Padres 9-6 Wednesday and avoid a series sweep.

The San Diego Halos drop one to Colorado.

Football Dad Motivates Son With BB Gun, Overdoses, Has Fantastic Mugshot
Barker was arrested and charged with one count of child abuse, one count of aggravated assault with a weapon, and one count of tanning while apparently wearing a pith helmet.

Although the story is sad, the photo is epic.

September 16 - BR Bullpen
Events, births and deaths that occurred on September 16.
1957 - The Los Angeles City Council approves a 300-acre site in Chavez Ravine for a Dodger Stadium if the club will finance a public recreation area. Although they won't own the team for another 37 years, Frank and Jaimie McCourt start to argue over who owns the site.
1970 - Clyde Wright joins Dean Chance (1964) as the Angels' 2nd twenty-game winner as he beats the Twins, 5 - 1. Bert Blyleven, 19-year old rookie, ties an American League record by striking out the first six batters. He strikes out 10 in 6 2/3 innings.
1987 - In a 6 - 4 win, California's Bob Boone catches his 1,919th ML game to break the record held by Hall of Fame member Al Lopez.
Happy b-day:
1953 - Chris Knapp, pitcher From baseball-reference: "Chris Knapp had one career save in the majors. It came on May 28, 1980 while a member of the California Angels against the Texas Rangers. He never actually got an out in the game. He gave up a run scoring single to Jim Sundberg and then Billy Sample was caught stealing third base to end the game."

Run Support and a Conger single: