Just one bad pitch, and too much Matsui - The Olympian - Olympia, Washington
With the Mariners clinging to a one-run lead and two outs in the seventh inning, Vargas threw an 0-1 fastball inside, but not inside enough to Hideki Matsui. The veteran slugger ripped it into the right-field seats for a two-run homer to provide the tying and winning runs in the Angels’ 4-2 win over Seattle on Wednesday at Safeco Field. "Vargas did an outstanding job for 62/3 solid innings," Mariners manager Daren Brown said. "He just left a pitch up to Matsui and it cost him." But the fastball to Matsui was even more frustrating because Vargas had first base open with two outs and Brandon Wood, hitting .165 this season, standing in the on-deck circle. "I feel like I’m smarter than that," Vargas said. "(Matsui) is definitely a guy that can change the game. And we’ve got a guy we had success with on deck (Wood). ... You can’t let him beat you there. You probably just keep feeding him sliders and if he walks, he walks, and just move on to the next guy." In Moore’s mind, that was what he wanted to do. He called for a slider and Vargas shook it off. He called for a change-up, and Vargas shook it off, wanting the fastball. "Vargas wanted to go with his gut and went with it," Moore said. " ... I should have went out there and made a visit, but I didn’t. It hurt us."

These are a couple interesting quotes from the Mariners' battery and sort of highlights how a catcher can have an impact on the pitcher. If the catcher had had a bit more experience, he would have reminded Vargas that they didn't have to pitch to Matsui, especially with Wood on deck. I don't know how it relates to the the Angels catcher situation, but it at least help me realize the importance of the pitcher/catcher interaction. Have some highlights: Gutierrez makes the catch in center - Howard Kendrick skies one to center, where Franklin Gutierrez tracks it down for the out, Matsui crushes a go-ahead homer to right - Hideki Matsui hits his 18th home run of the season, a two-run shot that stakes the Angels to a 3-2 seventh-inning lead, Callaspo's dinger adds an insurance run - Alberto Callaspo takes Sean White deep to right for a solo shot, extending the lead to 4-2 in the eighth, Bell throws six frames of two-run ball - Trevor Bell strikes out six over six innings of two-run ball.

Someone needs to update Scioscia's Relief Pitcher Flowchart to reflect the new roles for his relievers.

Just in time for the Halos big playoff push.

Frank McCourt has taken Dodgers deep in debt - latimes.com
Since buying the Dodgers for $430 million six years ago, Frank McCourt has so heavily leveraged the team — $433 million in debt as of last year — that he has struggled to find additional financing. The debt load has limited how the Dodgers can pay their players and could affect the team's ability to sign talent.

Here are some more tid-bits from the linked article:

This is some serious B.S. And it makes me glad McCourt wasn't able to buy the Angels as he tried to do prior to buying the Dodgers.

Finally, A Baseball Fight That Doesn't Disappoint - Deadspin.com
A night after bowling over the catcher, Nyjer Morgan gets a pitch behind him. Morgan goes after the pitcher, when — BAM! — Gaby Sanchez out of nowhere.

By the headline I thought the McCourts had met outside the courthouse to settle their dispute.

Reds' Chapman hits 103 mph, gets 6-1 win - Yahoo! Sports
No. 1 for Aroldis Chapman. Eight and counting for his new team. The Cuban left-hander hit 103 mph on the radar gun during another sizzling inning Wednesday night, then got his first big-league win when the Cincinnati Reds rallied for a 6-1 victory over the Milwaukee Brewers that pushed their NL Central lead to eight games. 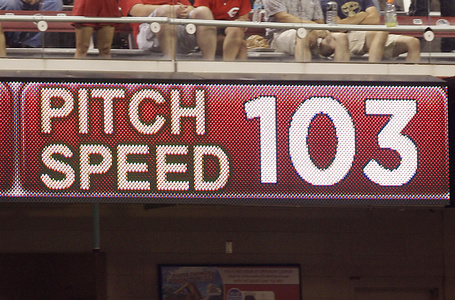 Beck's Blog: St. Pierre finally gets call to big leagues
Max St. Pierre is finally coming to the big leagues. He won't be the most glamorous September call-up, but he might well be the happiest. After 978 games over 14 minor league seasons, the longtime Tigers farmhand will join the big club as an extra catcher when rosters expand on Wednesday.

It's nice to see someone rewarded for chasing their dream. 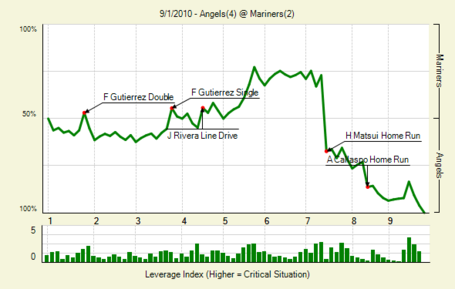 September 2 - BR Bullpen
Events, births and deaths that occurred on September 2.
1880 - Using three towers illuminating light 100 feet above the playing field, teams from the department stores of Jordan Marsh and R.H. White stage the first night game.
1912 - At Boston, Christy Mathewson wins both games for the Giants in a 5 - 2, 6 - 1, sweep of the Braves. In the opener, Matty relieves Rube Marquard in the 9th with the score at 2 - 2 and tosses three shutout innings. Larry Doyle ends it with a 3-run homer in the 12th. Matty coasts to his 19th win in the nitecap after the Giants chase Ed Doheny with five runs in the 3rd. Pitch counts? We don't need no stinkin' pitch counts!
1951 - Tony Ponce of the Phoenix Senators (Southwest International League) hurls his 38th consecutive complete game in beating Yuma 4 - 2 for his 25th win of the season. Relief pitchers? We don't need no relief pitchers!
1965 - Mickey Mantle hits a 1st inning homer with two on as New York scores five runs on their way to an 8 - 1 win over the Angels. Whitey Ford is the winner. I think that Mantle guy was pretty good.
1968 - In the last Pacific Coast League game played in Seattle, WA, Jim Bouton of the Seattle Angels (a combined PCL team of the Pilots and California Angels) tops Spokane, 4 - 1.
2002 - The A's defeat the Royals, 7 - 6, for their 19th straight victory to match the longest winning streak in American League history. What few mention is the Angels went 14-6 over the same span, staying in the playoff race.
Happy b-day:
1863 - John Henry, outfielder (d. 1939) The current Red Sox owner. (he hasn't realized he's been dead for 70 years).
1960 - Rex Hudler, infielder. Happy five-o to the Wonderdog.